Come here, reader. I have something very important to share with you. A secret that a lot of people don’t know. A timeless truth that has been forgotten in recent years. A revelation that will change the way you view your spouse. Lean in close now. Here it is:

Psst. Men and women are different. 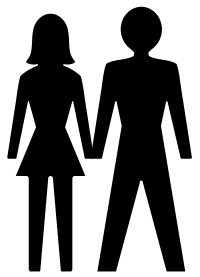 by AnonMoos via Wikimedia Commons

Yep, that’s it! This obvious fact has indeed been denied by plenty of feminists, psychologists, and academics. They admit that we have differing private parts, but some have argued that the concepts of maleness and femaleness are largely social constructs taught as stereotypes to children.

Yet science has recently shown that having a penis/testicles or a vagina/ovaries is hardly the only difference between man and woman. When God took a little dust and molded it like Play-doh into man and then grabbed a rib bone and crafted it like a pipe cleaner into woman, he didn’t go for outer variations only. He made us female or male through and through.

Here are some of the amazing differences that we now know exist between men and women. (Of course, these are generalizations, and specifics may vary.)

Can you believe that list is so long? There are other differences as well, but I’m not writing a dissertation, just a blog post.

The differences between men and women begin with outer appearance, but run down into bones and muscle, to chemicals, to brain structure, and into the cellular level.

So other than throwing out some interesting facts, what is my point? Well, it’s challenging to have a fabulous sexual relationship with someone so completely different from you! Yes, we are human, and that makes us immensely more like one another than not. But all these physical, brain, and hormonal differences mean that we approach sex differently. And God designed us that way!

When your husband or wife approaches the bedroom differently from you, some of that is due to gender differences.

So perhaps her better language centers mean that she can juggle several trains of thought and communicate during lovemaking, whereas he can grunt.

The hubby’s better distance vision and depth perception may help to explain why he is so visually oriented, whereas the lack of body hair and more pain receptors link to why she is more sensitive to touch.

And then there is her sensitivity to smell. Do I really have to spell out what that means, guys?

His greater lung volume and muscle mass may explain why God designed men to typically have more work for the sexual act itself, while her lessened blood flow could be related to why it takes longer for the wife to become sexually aroused.

If we weren’t different from one another, there wouldn’t be such an attraction between male and female. But at the same time, you have to understand that the spouse in your bedroom isn’t exactly like you. Your sexual partner is different all the way down to their core.

I have come to believe that it is God’s brilliant design to make mutual sexual satisfaction something you must work toward together. You must recognize those differences, appreciate them, and play to them. As many have said before me: Viva La Difference!

“So God created man in his own image, in the image of God he created him; male and female he created them.”