How’s that for a title you didn’t expect from me?

Sheila Gregoire at To Love, Honor and Vacuum recently had two opportunities to be interviewed about sexuality by the Huffington Post. Not surprisingly, Sheila was outnumbered in her moral perspective…FOUR to one. I suspect those are better odds than we firm-stance Christians have in the secular world as a whole, though. 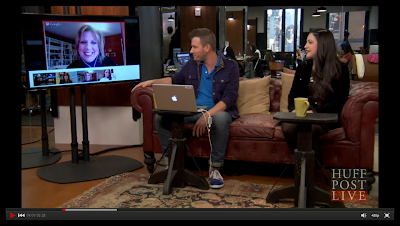 Sheila’s the one with the beautiful smile on the big screen.

In this last segment, the subject was about having premarital sex in one’s 20s and whether that’s a positive thing for your sex life as a whole. Of course, Sheila took the biblical stance of keeping sexuality in marriage, but she didn’t have to cite scriptures on a secular program; God’s truth is consistent, and the case for sex within marriage is supported by statistics. She did a terrific job and showed that she cares deeply about people experiencing God’s best for their marriages and sex lives.

At one point, the interviewer (not on her side) tried to support his point that sex doesn’t have to be a deep, emotional connection by attempting to quote Woody Allen: “The worst sex that I’ve ever had was still pretty good.” I couldn’t find that exact quote, but I believe this one from the famous actor/director is what the interviewer meant: “Sex without love is a meaningless experience, but as far as meaningless experiences go it’s pretty d–n good.”

Which brings me to my point. We Christians who encourage people to remain sexually pure until marriage need to admit what I knew when I was living the wrong lifestyle: Premarital sex feels great.

It is physically satisfying and entertaining and exciting. We don’t do our cause and our children any favors when we say that sex outside marriage isn’t good . . . and people hear that it doesn’t feel good. So when your teenager gets in the car with a date and goes too far, and it feels awesome and powerful and deep, might they discount the Christian message that waiting is better?

They might . . . because, as I’ve now said three times now, the premarital sex feels great.

BUT the married sex is SO MUCH BETTER!!!

Sex outside marriage is like having a Chips Ahoy cookie. I happen to like those. If someone brings a bag of them to a church potluck, I will scoop up a cookie or two and add them to my waistline. BUT what if you’re looking at a bag of Chips Ahoy versus Girl Scout Thin Mint cookies? (For those of you outside the Girl Scout realm, they are To. Die. For.) No one in their right mind would pick a hard store-bought cookie over a thin mint that delights the senses and supports the Girl Scouts.

If that comparison doesn’t speak to you, pick any of the below:

You get the point. If you had no idea about the second column, you might be happy having a hot dog from the street vendor. (This is just an example. Hey, the best tamales where I live come from a truck.) But if you slip into a Lamborghini wearing your Christian Dior outfit and eat a meal at Emeril’s, you know it’s worth a lot more.

I didn’t know I was in a rowboat when I was having sex before marriage. My boat was leaking, but I figured I was doing it wrong somehow, or that I merely needed a better paddle partner. I finally figured out that the only way to get it right was to get out of the rowboat and board the cruise liner!

When I teach my kids about sexuality, I plan to be honest. I tell them that the physical sensations of sex in any consensual context can be very pleasurable. God made sex to feel great. However, He blessed us with marriage to give us the very best. That’s just how our Father is. He loves us enough to want us to have the cream of the crop, the icing on the cake, the thin mint cookies . . . because we are the apple of His eye.

So yeah, those preaching multiple sex partners and 10 New Ways to Orgasm are right in saying that their prescriptions may give your body a real high. But I not satisfied with climbing a hill and whooping it up anymore. I want Mount Everest, baby.

In marriage, there is a blessing from God and a connection of life commitment that provides the foundation for the best physical intimacy one can have. Studies show those most satisfied with their sex lives are married . . . and married for a while.

Sheila beautifully described it in her interview: “It is a beautiful thing. And to say that you can have intimacy with all kinds of people, yeah, but there is nothing like a marriage.”

There is truly nothing at all like a God-centered marriage that pursues His holy plan for sex. I pray that for the couples who read my blog — that you will not just experience physical satisfaction, but spiritual and emotional connection through this deeply personal, physical act.