Today is supposed to be the day we hear from my hubby, whom I have affectionately called Spock. However, stomach virus hit our household last week, and there wasn’t a lot of sexiness going on in the Hot, Holy & Humorous household. I ask for a little grace in this regard and a week’s extension on that deadline. Spock will be here next Monday.

In the meantime, I’ve decided to run a different post on marriage I’ve been sitting on for a while.

From time to time, I get comments questioning or attacking me and my blog. The first time it happened, I was upset . . . for quite a while. I kept playing over and over in my head what the commenter said and letting it drag me down. I talked to my husband about it until my face turned blue. I worried and wondered if I was really doing my best with this ministry.

Yeah, I’ve gotten over that.

For every detractor, there are maybe ten or more readers who comment that this blog has been helpful and encouraging. Moreover, I am constant in prayer about what I am doing and have ongoing reinforcement and encouragement to continue in this ministry. As I have stated quite a few times, I believe in healthy, godly marriages, and I mostly address one piece of the pie that makes a quality marriage — sexuality. Others address issues such as finances, communication skills, parenting, and how to hang a picture in your house together without either of you losing your religion (link, anyone?).

Over the whole pie, we must place growing our own faith and living out Christianity as individuals before God.

Intro done. Now here’s today’s point: I have learned a lot about how to approach conflict with my spouse from how commenters approach concerns with me. While I welcome conversation and even debate, there is a beneficial way and a destructive way to communicate when you disagree with another person. I’ve learned that what makes good conflict resolution in blog comments makes good conflict resolution in marriage. 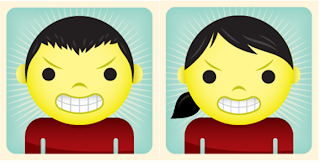 Here are my take-aways.

Show respect. John Gottman, well-known marriage researcher, talks about the Four Horseman of the Apocalypse in his book The Seven Principles for Making Marriage Work. These are ways you deal with your spouse that, if overused, signal the coming of the end. Two of them, criticism and contempt, are all too common in marital arguments. It’s easy to feel that you are criticizing your partner’s opinion and merely have contempt for his position, when in fact you are demonstrating a lack of respect for the person. God created your partner in His image as well, and we should treat others with respect. It is the command of the Bible that we treat each other this way as well.

“However, each one of you also must love his wife as he loves himself, and the wife must respect her husband.” Ephesians 5:33

“Show proper respect to everyone: Love the brotherhood of believers, fear God, honor the king.” 1 Peter 2:17

“Husbands, in the same way be considerate as you live with your wives, and treat them with respect as the weaker partner and as heirs with you of the gracious gift of life, so that nothing will hinder your prayers.” 1 Peter 3:7

Ask for clarification. A ridiculous number of our marital agreements have occurred because we thought we understood what the other spouse had said. Perhaps we took one phrase and gave it additional meaning, ignoring the rest of what our spouse said. Or maybe they didn’t word things well and it came out all wrong. In my calmer moments, I have been known to look askance at my husband after he says something hurtful and ask, “Do you want to let that stand? Or say something else?” That’s a signal that whatever comment he made did not come across in a positive way.

Spouses should also learn to use phrases like, “What did you mean by . . .?” “It sounds like you’re saying . . .” “How does that match what you said earlier about . . .?” If you think your spouse’s position is wrong or hurtful to you, ask questions. He may not even think what you think he thinks. Was that clear?

“A fool finds no pleasure in understanding but delights in airing his own opinions.” Proverbs 18:2

“To answer before listening — that is folly and shame.” Proverbs 18:13

Be specific. It does not help to make blanket accusations at your spouse for anything and everything he has ever done to upset you. Avoid statements that include words like “never,” “always,” “constantly,” and “all.” Deal with the specific instance at hand. Explain the facts as you see them, what is bothering you (preferably as an “I” statement, such as “I feel used when you immediately roll over and fall asleep after intercourse”), and how you want to approach a win-win solution. Don’t drag into this moment every other time you have been hurt.

In fact, want the secret to reducing overall conflict in your marriage? Successfully resolve your next argument. Then the next one, then the next one, until you have established a new pattern. I like to think of it like a batter’s turn at home plate. He shouldn’t worry about his entire baseball career while waiting for the pitch; he just tries to get this one right, and then the next one, and then the next, and on and on until he has a pennant and makes the Hall of Fame.

“Please, because you belong to the Lord, settle your disagreement.” Philippians 4:2b

Don’t namecall. Seriously, they teach kindergarten children this. It’s basic. Wanna ruin your marriage? Start calling your wife a “b” or your husband an “a.” It doesn’t nothing to resolve conflict, get your point across, or help your relationship. It merely makes you appear petty and immature.

“Again, anyone who says to his brother, ‘Raca,’ is answerable to the Sanhedrin. But anyone who says, ‘You fool!’ will be in danger of the fire of hell.” Matthew 5:22

“Reckless words pierce like a sword, but the tongue of the wise brings healing.” Proverbs 12:18

Don’t assume intent or “heart.” You can’t see into their heart anyway. God can. Deal with the statement or behavior itself without trying to read behind it. You may be right with an accusation about their motive, but you may just as well be way off base. At times, our spouse is trying to show us love, but it comes across all wrong. For instance, for years my husband would walk away from arguments, which left me crushed — certain that he didn’t care enough to resolve the issue. WRONG! He walked away because it pained him so much to be in conflict and he wanted to give us both time to cool off. We were eventually able to discuss that what we each needed was different, when we stopped trying to characterize the other as selfish or mean for what they were doing, when it fact it wasn’t.

Look for areas of agreement and build from there. There is an interpersonal feedback approach called the “Sandwich Technique.” Essentially, one sandwiches a disagreeing comment or constructive criticism between two comments of encouragement or positive feedback. Simple example: “I love your dress, but your necklace is the wrong color. This color is better because it brings out your beautiful eyes.” I’m not suggesting constant use of this technique because, honestly, it can be overused and becomes very easy to spot the spam in the midst of the bread slices after a while.

However, the principle behind it is wonderful: Look for and point out the positive. Oftentimes, the point of conflict with our spouse is what stands out, like a “which one of these does not belong?” exercise. Yet we may agree about quite a lot, and we need to start there and build agreement. It’s a small thing, but shopping for furniture is the example that comes to my mind in my marriage. Our most recent couch purchase was an exercise in find areas of agreement: There was no way on God’s green earth I was going to agree to that hideous leather monstrosity with its massive cup-and-everything-else holders for every single seat. And there was no way he was agreeing to the cozy chenille sofa that barely had enough room for him to stretch out. But we discovered that the overall goal we both had was comfort. Starting from there, we ended up with a fabric we could both live with, reclining seats, and plenty of room for the two of us to snuggle.

“Finally, all of you, have unity of spirit, sympathy, love for one another, a tender heart, and a humble mind.” 1 Peter 3:8 (NRSV)

Remember that means don’t justify ends. Sometimes in getting the what correct, we forget to pay attention to the how. Yes, truth is important. We are not to be “tossed back and forth by the waves, and blown here and there by every wind of teaching and by the cunning and craftiness of men in their deceitful scheming” (Ephesians 4:14). But we sometimes forget that the next verse says, “Instead, speaking the truth in love, we will in all things grow up into him who is the Head, that is, Christ.”

Whether our disagreements with our spouse are big or small, we can become so focused on speaking truth that we forget the next words, “in love.” We are not told to ignore the Fruit of the Spirit or the many, many commands to “love one another” while making sure we get the content of any one issue correct. It matters to God how we treat each other. Just read the New Testament letters and see how much of them are about how we should treat one another.

“Make allowance for each other’s faults, and forgive anyone who offends you. Remember, the Lord forgave you, so you must forgive others. Above all, clothe yourselves with love, which binds us all together in perfect harmony. And let the peace that comes from Christ rule in your hearts. For as members of one body you are called to live in peace. And always be thankful.” Colossians 3:13-15 (NLT)

Your spouse’s part. Yes, of course, your spouse has responsibility in all of this — just as this marriage blogger has responsibility to listen to those who disagree with me and test what they say against God’s Word. In the face of reasonable and respectful challenge, I have changed what or how I said something here.

Yet, I think you’ll find the process here and with your spouse more pleasant and effective by paying attention to how you go about providing constructive criticism.

“If you listen to constructive criticism, you will be at home among the wise. If you reject discipline, you only harm yourself; but if you listen to correction, you grow in understanding.” Proverbs 15:31-32 (NLT)

“An offended friend is harder to win back than a fortified city. Arguments separate friends like a gate locked with bars.” (Proverbs 18:19)