I wasn’t around the birth of rock-n-roll, but I heard plenty about it from my parents who lived through the days of Elvis, the Everly Brothers, Jerry Lee Lewis, Little Richard, and more. When this new sound and its artists leapt from the starting gate, there were plenty of cheers, but a lot of people booed — a lot of Christians in particular.

Of course, things have changed a lot in years since, but I got to thinking about the similarities between our views of sex and rock-n-roll. Whether you’re a rock fan or not, hear me out and see if you don’t agree that sex is like rock-n-roll. 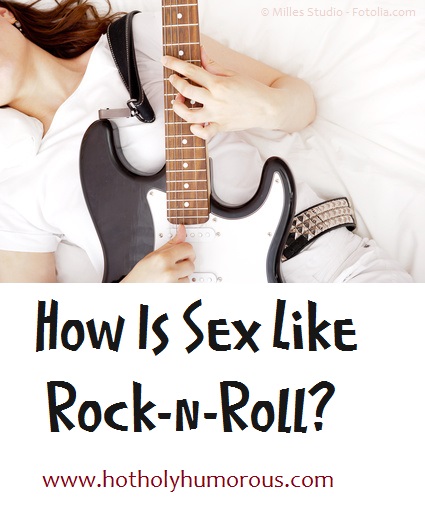 Music is a gift. Whatever people thought about rock-n-roll when it came out, at its core, it’s simply another form of music. And music itself is a gift from God. There’s nothing problematic or heinous about the notes and their arrangement, the instruments used, the music on the page.

Likewise, sex is a gift from God — with absolutely nothing wrong with its core expression.

Rock-n-roll is the music, not the abuses. Why did rock-n-roll get slammed so hard by so many Christians? (And still does at times.) Because the music itself got paired with abuses. Vulgar lyrics, recreational drug use, sexual misbehavior, etc. formed a “sex, drugs, and rock-n-roll” culture. And it’s still true that plenty of rock music is stuff you don’t want your 4 year old singing along to — or perhaps even your 24 year old. So in a reaction to horrendous associated behaviors, some denounced the whole thing, even with suggestions that rock-n-roll was “the music of the devil.”

Likewise, in our history, some Christians have treated sexuality and its sensual pleasures as a bad thing altogether because of abuses attached to it. They see the vulgarity, the selfishness, the misbehavior and conclude that not much good comes from sexuality. It doesn’t even have to be an overt declaration that sex is “the act of the devil.” Oh, no! It’s often far more subtle — simply communicated that sex is just a dangerous act that can’t really, truly be a good thing for us. We wives have often sensed this as the “good girl’s don’t” syndrome that surrounds sexuality itself with a cloud of constant disapproval, even beyond the nuptials.

Rock-n-roll has been adopted by Christians. Within the first couple of decades of rock-n-roll taking hold, there were Christians performing Jesus-themed rock music. But it didn’t really take hold until bands like Petra, dc Talk, and others crashed into the scene and showed that rock music could be used to honor God. Christian rock artists recognized it wasn’t the music that was the problem; it was all the extraneous abuses that clung to the rock-n-roll scene like barnacles to a passing ship.

Have you noticed this happening with sex? I sure have. Christian marriage advocates, authors and bloggers, speakers and brave pastors have tried to reclaim the core of sexuality and show how it can be incredibly God-honoring. Placed in the right context, practiced the way God intended, and freed from abuses, sex is an amazing, heart-thumping experience that honors God.

Some think Christian rock is an oxymoron. It’s true. Plenty of secular rockers laugh at the notion of Christians rockin’ out and believe Christians are experiencing a watered-down version of true rock-n-roll — with its rebelliousness and envelope-pushing and hard-core ribaldry.

Of course, I give a resounding NO to that one. Rock-n-roll without the abuses can be wonderful music and a treat for those who listen, including our God. And sex without the abuses is pure and beautiful and exciting. When you don’t get caught up in profane craziness surrounding rock music or sexuality, you’re left with the truest form of all — the music or sex itself.

Whatever your musical tastes, sex is kind of like rock-n-roll: It can be experienced as beautiful music, or weighed down by rebellion and abuse. How you decide to play that tune is up to you.