Today’s question is from a young wife frustrated that not only is she not having orgasms, her husband doesn’t seem to understand her sexual needs and desires:

I’ve been married 2 and a half years now and have struggled to experience orgasm with my husband since our wedding night. . . . I realized after our honeymoon that the female orgasm was harder to come by than I thought it’d be, but I tried so hard to stay positive and to wait for it to happen. But to date, I’ve never climaxed with him. I don’t think I’ve ever even come close.

I’ve talked with him about my difficulty responding physically 4 or 5 times – I’ve tried to be very sensitive – “It’s not you, I just need a lot of extra stimulation.” “I really enjoy being intimate with you, but I really need help learning to be physically responsive.” Things change for a couple of encounters and then go back to the way things were.

How do I get him to be interested in going the extra mile for me? He’s a great guy, but I’m just so unsatisfied in the bedroom and I really long to be able to share what he’s having (it really looks like it feels great) and I want to be able to make him feel like a stellar lover. Why do men feel like their orgasm is the closer for sex?? I feel like he doesn’t even think that I have sexual needs. I go to bed all worked up sexually while he’s snoring next to me most nights we make love. I hate to sound selfish, but how do I get my turn? 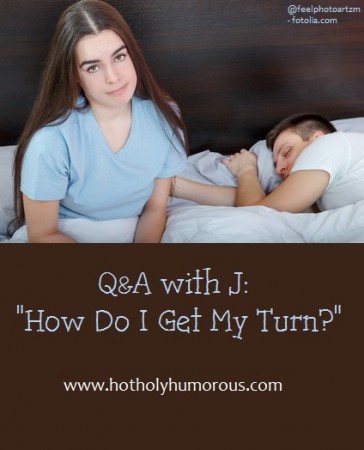 Let’s start with making sure things are working the way they should with your body. Since this wife did have an orgasm on the wedding night, we know it can happen, but some physical issues could still be obstacles. Just so you know what’s “normal,” your sexual response should include heightened sensitivity of your genitals, lubrication (although you may need to add some), and swelling of your inner vaginal lips to 2-3 times their usual size.

But if you’re low on estrogen, you may not lubricate properly. If you’re on oral contraception, it could interfere with your sexual response. And there are other potential issues that could be hindering your body’s full participation. Talk openly with your doctor about your concerns and ask for a full physical exam and, if needed, options for birth control.

Assuming everything’s on the up-and-up with your body’s responses, you two still have to learn how your body works. Unfortunately, watching Hollywood scenes, reading magazine articles, and even hearing all the sex hype from happy married couples can make it seem like revving up the sexy is a fairly straightforward endeavor with guaranteed pleasure. Not so.

You may have experienced orgasm early on in your marriage because everything was awakened then and your body overloaded, so to speak. (Though some couples report more of a pfffft experience their first time.) But one orgasm does not a sex life make. And you want to want have that excitement again and again.

The point is you two need to go back to ground zero and figure this thing out together. And sensitivity is great, and I’m all for that! But I think most men respond even better to fun. That is, sometimes we are so concerned with our hubby’s feelings and so we talk it out and try to make him feel better and…la la la. When maybe your guy is more of an action speaks louder than words sort. Go with me for a minute here and think about team sports: Guys get in a locker room together, get a short, rousing pep talk, then take the field — which tells you something about what gets a guy motivated.

Think about what you can do to pep up your guy and make him excited about exploring your territory. That could be everything from leading up to sex with suggestive texts, flirting, fondling, etc. to drawing a treasure map on your body that he has to follow to get to the booty (literally and figuratively). Consider what your particular husband would respond to, and see how you can paint this exploration time as something exciting and fulfilling for both of you.

A couple more notes (specifically for the hubbies reading this post): First, he needs to ease slowly into lovemaking. Even after 20+ years, sometimes I still have to remind my husband that hugging, kissing, and touching me are surefire ways to shift my brain and body into gear. You can help him get the point by simple things like asking for him to massage your body with lotion or oil or suggest a slow dance (naked?) before you make love. And secondly, for orgasm to happen, he’s got to learn what a clitoris is and what to do with it. All orgasms are caused by either direct or indirect contact with her clitoris. Hubbies would do well to treat their wife’s ever-so-sensitive part like their favorite instrument and master playing it well. Guys, stop playing Guitar Hero and Rock Band and instead learn to strum your wife’s goodies to her heart’s delight.

On the whole, I have a mixed view of sex toys. On one hand, I believe they can help couples that need an extra boost or deal with sexual arousal and erection issues, so they can engage more fully in sexual intimacy in their marriage. On the other hand, I think our culture is becoming more reliant on batteries and kink than relationship and intimacy. Some people using sex toys are looking for shortcuts — and they found them. I’m pretty confident a vibrator can get most women to climax faster than their husband’s hand. To me, the question when deciding whether to use a sex toy must be whether it increases intimacy or detracts from it.

When one of you is not on board, it could be detracting from intimacy. I know that’s not entirely fair, because if he’s going to balk about using a vibrator, he should step up and figure out how to help you climax himself. But have an honest discussion with him about it, asking what he’d be willing to try and what makes him uncomfortable. Respect his feelings on this, and then ask for solutions you could both accept. Maybe he could commit to trying longer to get you aroused, or maybe you could peruse some online Christian intimacy retailers together and find something you’re both willing to try.

And finally, you are not selfish for wanting to experience the height of ecstasy with your husband in your marriage bed. And he needs to understand that too. Hubby may have grown up with the oh-so-mistaken notion that sex is primarily to meet the man’s needs. To which I say, Hogwash! And a very large number of wives agree with me.

God gave you more nerve endings in your genitals than he gets in his. Your clitoris has a singular purpose — to give you pleasure. Your body is capable of multiple orgasms, while he’s got the one full-blast option (until he passes a refractory period). So nobody tell me God isn’t interested in her having a fabulous time in the marriage bed!

If you’re like many wives, you may have tentatively suggested this or that, asked for something more, and hinted at your dissatisfaction. I suggest you look your husband in the eye and say something like, “I love you so much, and I want to have a fantastic orgasm in your arms. I will do everything I can on my part to make it happen, but I need you to get on board. What can we do to make this a mutual goal for our marriage?”

Some other posts that might help your situation are Preparing Yourself for Sex, Manual Play for Her, and Orgasm: If Only I Could O. Also, my book Sex Savvy: A Lovemaking Guide for Wives has a lot more tips on revving up your drive and savvy in the marital bedroom. That could be a good resource for your marriage.

I know I didn’t cover everything I could say, and I’m sure my readers will have more to add. But maybe something in here will help you get moving in the right direction. In the meantime, I’m saying a prayer for your and your marriage. Because yeah, you deserve a turn.