Today’s question is an interesting one. A newlywed wife shared something with her mother, which stirred up an emotional hurricane. Here’s her question:

My new husband and I had a couple’s wedding boudoir photo shoot the day after the wedding. (We waited till our wedding night to have sex.) Our pictures were tasteful and beautiful. I mentioned to my mother (60 yr old) about it, and she asked to see an example of what I was talking about. I sent her 1 picture with both of us, me in the bridal corset and everything I wore under the dress and him in underwear laying on a bed looking in each other’s eyes.

I just don’t know what to say to her now to combat all this. She questioned my husband’s salvation (a newer Christian) and suggested that he is a bad influence and I am unequally yoked. I was regaled with all the plans and hopes and dreams her and dad had had for my life…like missionary and pastors wife…had how short had fallen. Any suggestions on how to approach this? 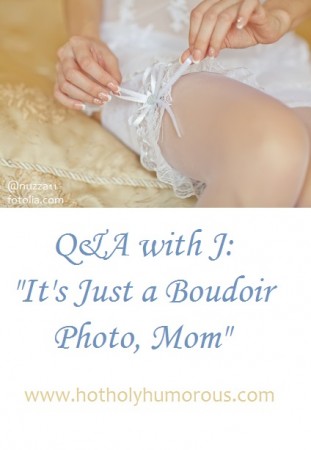 Before I tackle the specific question, I want to point out that this couple waited until marriage to have sex, took the boudoir photos the day after the wedding, and wanted intimate yet tasteful photos. I’ve written about bridal boudoir photography, but I hadn’t covered couples’ photos like this. Actually, I think it’s a rather nice idea if approached properly.

The problem arose when she shared the photo with Mom. First off: Hey, Mom, you should know better than to ask to see something called “couples boudoir photos”!

As I’ve said before, (most) parents want their grown children to have beautiful sexual intimacy in their marriages — but they don’t want to know anything specific. It’s like how my parents know I have this blog and books about Christian sex, and they’re pleased, but they do not want to read them. Even if you’re completely fine with what your kids are doing, you can’t erase all that personal stuff from your head. So parents, don’t ask.

But now for the questioner: Yes, I know it’s too late for you, sweet wife, but in the future and for others reading this, keep the boudoir photos to yourselves. I assume your reasons for taking them were to mark the beginning of your intimacy together, to have a reminder of your first day as a one-flesh couple, to relish the special bond represented by the marriage bed you share.

That’s all very lovely. But even though nothing was revealed, it can be awkward for a friend or family member to see you and your husband somewhat undressed. Be careful not to plant images in their heads they really don’t need.

However, Mom asked to see the photo, you complied, and now the pointed edge of her scathing critique has left a wound in your heart and your relationship. Let me reassure you that her attack on your faith was out of line. It is one thing to say, “Oh my goodness, I can’t believe you did that!” — because some people simply won’t get it — and a whole other thing to insult you and your husband personally with attacks on your character and commitment to Christianity.

Even if you were doing something wrong (which you weren’t), the way another Christian should approach the situation is with gentleness (Galatians 6:1) and dealing with the fault at issue (Matthew 18:15). I want you to understand this point because, putting yourself in your mother’s shoes of believing this was wrong, it still doesn’t give her — or any other Christian — permission to slander you in this way.

Yet you still have an obligation to treat her with kindness. That’s so hard when you’re personally attacked and emotionally wounded. But I tell it like it is here, and we don’t get excused for bad behavior on our part just because someone else did it first.

Remind yourself often that you are commanded to honor your mother (Exodus 20:12, Matthew 15:4, Ephesians 6:2-3); that you must respond with love (John 13:34-35, Ephesians 4:2); and that agape love is active (1 Corinthians 13:4-7). Honestly, I have times with certain people in my life when I recite the Fruit of the Spirit in my head like a lifeline. No matter how much someone  hurts me, I don’t want to forget who I am before God and my desire to live according to His commands.

So remember to be the daughter and Christian you want to be, rather than letting your own hurt become anger that lashes out and turns you and your family into enemies.

Now let’s get down to the real question: What to do now? Does treating your mother with honor mean you put up with her accusations and attacks? Nooooo!

It’s time to set some boundaries around your marriage. The decision to take couples boudoir photography was yours and your husband’s, and the photos are for your use and enjoyment. While it’s sad that your mother feels the way she does, she needs to know that you stand with your husband and your marriage.

Dr. Henry Cloud and Dr. John Townsend assert in their groundbreaking book, Boundaries: “For marriage to work, the spouse needs to loosen her ties with her family of origin and forge new ones with the new family she is creating through marriage.” Setting appropriate boundaries means responding calmly but firmly to anyone who attempts to damage your marriage with hostile words or actions.

Likewise, in The Seven Principles for Making Marriage Work, based on extensive marriage research, author John Gottman, Ph.D. states, “An important part of putting your spouse first and building this sense of solidarity is not to tolerate any contempt toward your spouse from your parents.” When a parent personally attacks your spouse, you should speak up in his defense.

“Mom, I understand your feelings about this, but my husband is a committed Christian who waited until our wedding night and treats me well.”

“My husband has not been a bad influence on me. Rather, he loves me, and I hope you can learn to appreciate that.”

“I will not stand here and let you insult my husband. If you continue, I’m going to have to leave.”

Stand up for yourself as well — reassuring her that you are the same person she has known and loved for all these years. One boudoir photo she doesn’t approve of does not change who you are.

“Mom, I know you see this as evidence of a problem, but I’m totally committed to my Christianity and to my marriage. Even if you don’t understand, I hope you can see past this to the person I really am.”

When things like this happen, it’s tempting to argue out all the points with her. But when the emotions run so high, it’s very unlikely you’ll get anywhere with such a conversation. It’s better to set boundaries so your family understands you’re only willing to discuss this issue, and any other problematic ones, if and when they can approach you with respect.

It also usually takes time and repeated reminders to get across that you really will not hang around for go-nowhere conflict or stand-here-and-take-it slander. Mud-slinging just leaves everyone covers in slimy dirt, and who wants that to be the tone of your family?

In the future, if she can address the subject more calmly and respectfully, you can discuss your reasons for wanting to do boudoir photography. You could even listen to your mom’s concerns, since she may have drawn conclusions that aren’t even correct (like who might see these photos). You can reassure her and perhaps help her to see your viewpoint. It doesn’t mean she’ll agree, but families can disagree about all kinds of things and remain close.

Finally, I want to point out that her reaction may have been extreme due her own wounds. I don’t know this for sure, but often when people have an over-the-top, freaked-out response, it’s because their own sensitive places got poked. If that’s possible, recognizing this might help you to give her a bit of grace while she works through emotional pain.

As pastor James MacDonald has often said, “There is no pain like family pain.” It is a unique experience to be in the storm of family conflict — and especially difficult when your family of origin is pitted against your chosen family through marriage. But many have navigated the turbulent seas, reestablished calm, and enjoyed the blessing of having two families who care about them deeply.

I pray this is your outcome.