Today’s question is from a wife who struggles with her promiscuous past. It’s a story I know all too well.

I’m soooo glad I found your website. My story seems identical to yours and I’m dealing with forgiving myself. I struggled going too far with pretty much every boyfriend I had. I did this after being saved 🙁 and now I’m married though. Did you struggle after baptism? I was baptized at 14 but I guess I kind of ran from God in a way starting in high school. 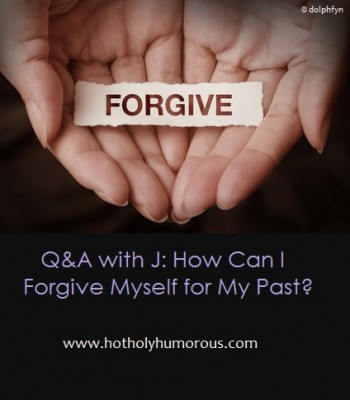 I was baptized at age 13. My struggles with sexuality occurred after that and for several years.

Sometimes I think we Christians place such an emphasis on getting saved that we don’t equip people to live as imitators of Christ. We act like the switch is immediate. But we need to learn how to be a Christ-follower and put on spiritual armor.

If you struggled with sin — even sexual sin — after you accepted Christ as your Savior, you’re not alone. The switch wasn’t immediate for most of us either. Instead, we need a full-fledged strategy for walking in new life and aligning our sexual desires with God’s plan.

Rely on God. Of course, it begins with relying on our Heavenly Father. He created you, marriage, and this whole thing called sex. If you want the best marital intimacy possible, He gets to call the shots. Happily, you get to enjoy the benefits.

Pray for the sexual intimacy in your marriage. Ask Him for wisdom on how to approach sex with your husband. Ask for help in getting over your past. Lean on Him when you feel bad and frustrated.

“In my distress I called to the Lord; I cried to my God for help. From his temple he heard my voice; my cry came before him, into his ears.” Psalm 18:6

Let the Spirit guide you. It’s not like you and I didn’t know what we were doing was wrong. But I wasn’t really listening to the Spirit back then. In fact, I daresay the majority of sexual problems boil down to selfishness turned into sinfulness — we want to do what we want to do.

Now it’s time to listen to what God is telling you through the Holy Spirit. Here’s the good news! That niggling feeling you have that you need to stop feeling guilty about your premarital past? I suspect that’s the Spirit at work. By giving your life over to God, you invite Him to nag at you inside when things aren’t going exactly as they should. But the Holy Spirit isn’t “convicting of sin” so much as wanting to guide and teach you how to walk in the right path.

“But the Advocate, the Holy Spirit, whom the Father will send in my name, will teach you all things and will remind you of everything I have said to you.” John 14:26

Forgive yourself. It’s interesting that you write about forgiving yourself, not getting forgiveness from God. That’s where I struggled too. I held on to my guilt much longer than God did. It affected how I felt about myself, my marital intimacy, and my relationship with God. I wanted to let go, but I had almost defined myself by my sin.

Then I came upon this passage in Scripture:

“Or do you not know that wrongdoers will not inherit the kingdom of God? Do not be deceived: Neither the sexually immoral nor idolaters nor adulterers nor men who have sex with men nor thieves nor the greedy nor drunkards nor slanderers nor swindlers will inherit the kingdom of God. And that is what some of you were. But you were washed, you were sanctified, you were justified in the name of the Lord Jesus Christ and by the Spirit of our God.” 1 Corinthians 6:9-11.

Notice how it says, “And that is what some of you were“? Past tense. Then it goes onto say that you were washed, sanctified, justified. I read these verses over and over to myself, to remind myself that my past was just that — past.

And really, that’s about all I’ve got for forgiving myself. I could give you a lot of self-help answers and platitudes and reasons why you should let yourself off the hook for long-ago bad behavior. But my own journey to forgiveness involved humbling myself before God, asking for repentance, and then reminding myself repeatedly that I was a new creation. Nothing else worked for me, and that did.

There are many verses in the Bible about God’s finished work in us, about God’s mercy and wholeness, about becoming a different person from who we were before. I recommend finding one that works for you — then repeat it a whole bunch of times so that it soaks in.

“Therefore, if anyone is in Christ, the new creation has come: The old has gone, the new is here!” 2 Corinthians 5:17.

Embrace new truths. While working on forgiving yourself, you should also be sure that you’re embracing new truths about sexuality, based on God’s design. We don’t simply move away from sin and lies, but toward goodness and truth. You have to replace the wrong thinking of your past with a better understanding of what God desires for sex in your marriage.

That may mean rehearsing new scripts in your head before, during, and after sex with your husband. Remind yourself mentally of truths like:

When you have a bad past, the scales lean in favor of viewing sex in a distorted way. But if you engage in the blessings of sexual intimacy the way God intended, over time the scale tips. And eventually you’ll build up so many positive experiences, the weight will be heavy on the side of God-sanctioned intimacy.

I rarely think about anything specific from my promiscuous premarital past these days. It just seems so long ago and minuscule compared to the thousand-plus sexual experiences I’ve had with my husband. I’ve got several years of marriage more than you, but my tipping point was reached long ago. You’ll reach yours too.

“That is why a man leaves his father and mother and is united to his wife, and they become one flesh.” Genesis 2:24

Act like you should. Some people phrase it as “fake it till you make it.” Of course, we don’t want to be fake in our sexual relationships with our husbands. However, there’s a lot of evidence that “acting as if” has a positive effect on your thinking.

I love the story in Mark 9 of a father begging Jesus to heal his son. At one point, Jesus says, “Everything is possible for one who believes.” The father immediately answers, “I do believe; help me overcome my unbelief!” That’s where a lot of us reside with whatever issue we’re facing. Like we believe we’re forgiven, but a small part still stabs at our insides with disbelief. We’re trying, but not quite there. But hey, this father was “acting as if.” He brought the kid, he asked Jesus for help, he was trying hard to believe . . . and Jesus healed his son.

Don’t wait for your feelings to completely catch up before doing the right thing. Make sexual intimacy a priority in your marriage. Engage fully with your husband. Continue in prayer and faithfulness to our Lord. Oftentimes, our obedience triggers the faith and feelings we desire to continue in God’s will.

“Jesus replied, ‘Anyone who loves me will obey my teaching. My Father will love them, and we will come to them and make our home with them.’ ” John 14:23