It’s Q&A with J time! Today’s question comes from a wife married for 16 years to a husband with many sexual troubles.

Then I discovered that he was somewhere he shouldn’t have been, and when I asked how things were going he lied and said everything was fine and he wasn’t struggling at all. After I told him I knew where he had been, he also admitted to searching for pictures of boobs on the internet recently. Since then, I have been really struggling. I have not kicked him out of the house again, but the trust we had been rebuilding has gone once more. I cannot be intimate with him, I don’t even know how to be affectionate towards him. I don’t believe that God wants us to separate permanently or divorce (I would have done that already if God had not been telling me to keep my marriage together), but I just don’t know how to move forward from this point. What should I do? 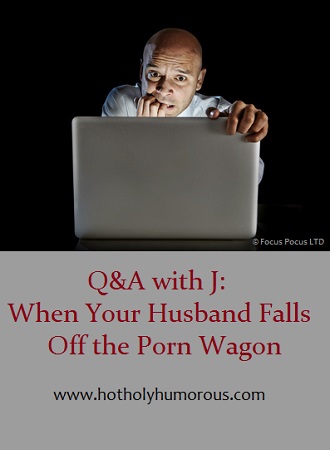 Plenty of us enter marriage with sexual baggage, but it seems like your husband brought in a U-Haul of issues. That’s not going to be cleared out quickly. But it can be done. If the Hoarders TV crew can help people find their furniture, I sincerely believe God in His infinite power can help you find your covenant intimacy past all the baggage your husband dragged through the door into your marriage.

Here are some very positive things from your story:

And now he screwed up. Big time.

But let me tell you a little story. I smoked in college. (Thank goodness my parents don’t read this blog. Don’t anyone tell them, please.)  A couple of years later, I committed to never smoking again. Have a kept that promise? Oops. I ended up with a pack of cigarettes one time for a totally different reason and smoked half of one. (Oh great, I just realized my husband will be reading this. Oh well, confession is good for the soul and all…) Did I tell anyone? As you can see, no, I did not. Why? Because I was thoroughly disappointed in myself and utterly ashamed.

We should tell our secrets. But sometimes it isn’t because we’re trying to hide our sin from others so much as we are weighed down with the shame of what we’ve done.

So, while I’m absolutely not excusing his lying (so please don’t anyone comment that I am), I understand why someone who “falls off the wagon” would have a really hard time fessing up. Your husband may have rationalized that he didn’t want to hurt you or have been worried that you’d kick him out again for messing up.

What you and he need to establish is a No More Secrets rule. No matter how bad the infraction is, if his demons take hold again and he screws up, he needs to immediately come to you and ask for forgiveness.

Realistically, many who struggle with an addiction, or simply with sin itself, will get off track and sin again. But you need to communicate that there is a difference between stumbling off the path and getting right back on and veering way off the path so that you’re breaking the whole marriage covenant. Visually, it’s like this: 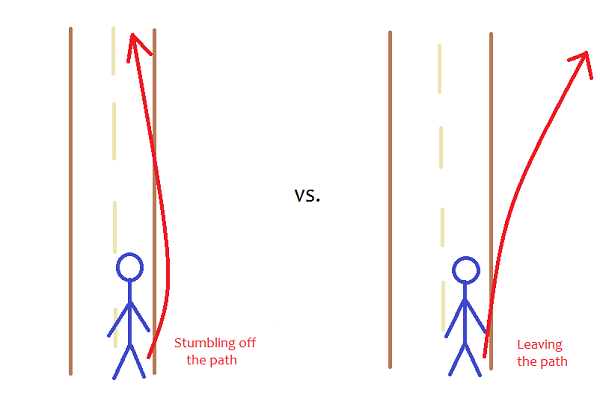 This also means that your husband should give you an accounting of where he is, what he’s doing, and when he will be home. I know people can feel like this is authoritarian monitoring, but really, it’s just good manners. “Hey, sweetheart, the guys and I are finishing up on Hole 9, running by Starbucks for a coffee, and I should be home by 6:00 p.m.” What’s the big deal about that? Nothing. Just show a little courtesy to each other. And it has the added benefit of keeping you honest.

Consider returning to counseling. If it worked before, you might want to keep going on a less regular basis. Even after things have improved, it could be helpful to continue for a while, perhaps once a month. That atmosphere could be more comfortable for you to discuss what issues still remain or what temptations he’s still facing.

Rebuild trust on your end. I completely understand you not wanting to be intimate with your husband after he returned to the mud pit, wallowed a bit, and lied about it. But ultimately, to have a healthy marriage, you both need to make an effort to rebuild trust. For specifics on how, I suggest this post: Rebuilding Trust in the Bedroom.

Together, and with God’s redemption, you can foster new and deeper intimacy in your marriage. But it will take time. Continue on the path you’ve already started, and ask for God’s hand along the way.