Today’s question is from a recently married wife.

Orgasms have always been difficult for me. I’ve probably had a dozen or so in nine months of daily sex. Now, this doesn’t mean I’m not enjoying sex — far from it! I absolutely love, and get a lot of pleasure from, our intimate times. But while I can get up to, say, an 8 out of 10 on a scale of “Brushing Your Teeth” to “Screaming Orgasm,” it’s pretty rare for me to actually tip over the edge. But I’ve found that one of the surest ways to enjoy sex LESS and be LESS able to get there in the end is to worry about whether or not I’m going to get there in the end. I’m happy most of the time just to relax, have a good time naked with my awesome hot husband, and let things happen (or not) as they will. I’m confident that as we learn to care for each other even better sexually in the coming months and years of our marriage, it’ll get easier for me to have orgasms.

So what’s the issue, then, you may be asking? Well, it’s my sweet, selfless husband, who feels absolutely terrible about the fact that he has 20 orgasms for every one I have. He’s told me he feels selfish, and like it’s unfair. I keep insisting that I’m having an awesome time, that I love having sex with him, and that I need to relax and not spend the first 30 minutes of sex worried about the last 30 seconds. But he still feels anxious and disappointed and, I think, a bit like he’s letting me down or failing me.

What should I do? Should I start… I don’t know, recommending books to him on how to bring a woman to orgasm? Are there such things from a Christian perspective, or that at least aren’t all about impressing your latest partner? Or do I just keep plugging away with the encouragement? I know it’s a bit silly to be writing in for advice because my husband is just too focused on my pleasure (and I can hear the folks in the comments section rolling their eyes now, haha!), but I really don’t know how best to approach it. 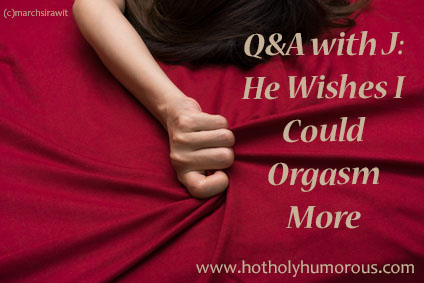 I’m not rolling my eyes, because I can see how this could cause some issues in the marriage. Yes, of course it’s awesome that her husband wants her to experience the mind-shattering climaxes, but not having those every time makes him feel like she’s missing out and then she’s wondering why she can’t orgasm more and it makes sex this chasing-the-golden-ring event. When what they both want and should have is an intimate, exciting experience in the marriage bed.

Now I agree she’s not having enough orgasms for all that daily sex, but I’ll get to that a bit later. First, I want to deal with some other issues brought up.

Is it unfair? She says he feels selfish for having so many more climaxes and thinks it’s unfair. It’s pretty clear he’s not selfish, because he’s concerned about her pleasure. But I agree: It is a little unfair. I know plenty of wives who’ve felt this way when they saw how much easier it can be for many guys to become aroused and to reach the apex of pleasure.

However, even though orgasm can take a long time to figure out or even a long time to reach, we ladies can have multiples. And isn’t that a little unfair to the guys? Rather than comparing apples and oranges here, we should appreciate the benefits and drawbacks to the biology we each have. If she skips orgasms from time to time, but has multiples other times, it can even out. But even if it doesn’t, we’re not keeping score.

Why is he anxious? Beyond his obvious desire to pleasure his wife, why else would he feel anxiety? Look, guys partly judge their sexual performance by how great they make their wives feel. If he has a hard time getting her to orgasm, he might take it personally — like there’s something wrong with his sexual prowess. And I’ll be supremely honest here: Maybe he could improve and help her get there more often.

Now much of the time, not orgasming has more to do with the physiological, emotional, and mental factors she has to deal with to reach climax. However, the popular notion that just by virtue of being a guy, he’ll know exactly how to turn you on is just bunk. Our bodies are complex and varied in how they respond.

It doesn’t help that movies and novels make it seems like women almost always climax during sexual intercourse with their man, yet other methods are far more likely to get her there. Since orgasms are tied to stimulation of the clitoris, direct stimulation from manual play and oral sex are often easier ways for wives to reach the Big O.

You can suggest resources to him, but even better is you two seeking them out together. My book, Hot, Holy, and Humorous: Sex in Marriage by God’s Design, is directed at wives but has a lot of tips you can both put into practice. It also has a whole chapter on reaching orgasm, including those multiples I mentioned. I also recommend Lovemaking by Dan and Linda Wilson and Sheet Music by Dr. Kevin Leman.

But let him know you’re willing to explore and discover what feels especially pleasurable to your body. Not like an All Encompassing Mission, but a playful adventure of trying new things and sharpening your skills together. You want to become experts in one another’s unique bodies. And for that, the best sex classroom is your own marital bedroom.

Why is he disappointed? I’m not sure about this husband, but I hear generally from hubbies that they get an extra kick of excitement when their wives climax. It really turns them on to see their wives turned on. It wouldn’t be a shocker, then, for this husband to long for her to orgasm more often. Why not watch her reach the peak and fly right over with a big smile on her face? It makes the whole sex experience even better for him.

However, climax isn’t the only indicator of how fabulous sex feels to us gals. Sure, I’m all for rock-the-bed-frame orgasms, but what you describe is what I and other wives have also felt: Sometimes we can be happy to “have a good time naked with my awesome hot husband.” There’s a lot to be said for the vulnerability, closeness, and general pleasure of having sex, even if climax doesn’t happen this time around.

How can you get him to understand? That’s a tougher question. I’ve had some success drawing analogies that my husband would understand. Like for the sports lover: “What if you started playing a game, but got rained out before it finished? Would you feel the whole thing was a waste of time, or would you appreciate the time you got to play?” Or for the video gamer: “Do you feel like you have to win every round you play? Or do you sometimes enjoy just playing for the sake of it?” Not sure those are great, but you get the idea. Come up with your own analogy that he might relate to.

Keep things light with encouragement that you love the experience, that you enjoy orgasms when they happen, and that you believe you can work together to make your peaks more frequent. Keep reminding him that you like the whole shebang, not just the she-goes-bang. But then plug away with the sexual experience! Help him make small adjustments with his hands or mouth or your angles during intercourse. Speak up for what feels good . . . and what feels even better.

Let’s face it: Your current sex-to-orgasm ratio could be improved. And since orgasm feels so incredibly awesome, why not have more of them? Check out the tips on getting there from my book, go slower with arousal and foreplay, and figure out what makes your body sing.

And yes, I think orgasms will get easier as you grow accustomed to one another’s bodies. After all, according to the famous 10,000-hour Rule, we need about 10,000 hours of deliberate practice to become experts at something. Sure enough, couples report more satisfying sex after a decade or two of being together. Thankfully, you have a lifetime together to get in all that great practice. Enjoy!

40 thoughts on “Q&A with J: He Wishes I Could Orgasm More”