I love to peruse the internet for recent studies that involve sex. While God’s Word remains the foundation of my perspective on sexual intimacy, we have learned a lot about His creation and how things work in the bedroom from well-conducted research.

My last stroll through the web for interesting reports yielded five studies I want to share with you. A couple of them have important implications, a couple are simply interesting, and one is guaranteed to make you laugh. 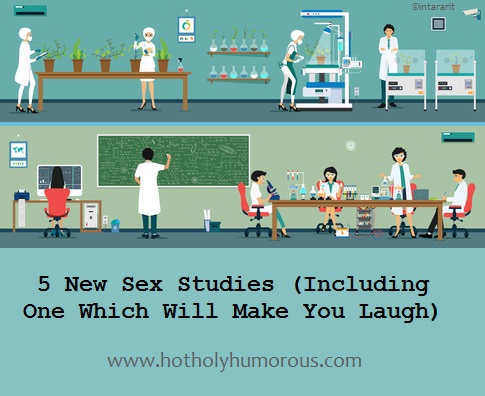 Duke University researchers tested two groups of men by administering oxytocin to one group and a placebo to the second group. They then surveyed the men regarding feelings of spirituality and discovered that those who took oxytocin were more likely to answer questions about spirituality in positive ways. For instance, they said that “spirituality was important in their lives and that life has meaning and purpose” and agreed more with statements like “There is a higher plane of consciousness or spirituality that binds all people.”

What’s particularly interesting about this study is that oxytocin is a chemical produced by our bodies that has been labeled the “love hormone.” It’s been linked to feelings of bonding, trust, and satisfaction. And it’s released during breastfeeding, prolonged physical contact (like a long embrace or holding hands), and sex. Indeed, at sexual climax, men in committed relationships get a huge rush of oxytocin into their system. The upshot is that having sex may make your husband feel not only connected to you, but to the spiritual realm — and our Heavenly Father. So the next time your husband claims making love with you confirmed that there is a God, he might really be reporting his mountaintop-like experience.

Is sex bad for his heart, but good for hers?

A federally funded study led by a Michigan State researcher looked at the link between frequency of sex and cardiovascular health. Participants were between 57 and 85 years of age, and information was collected once and again five years later. For those who had sex one or more times a week, men had a higher risk of cardiovascular events (like hypertension, heart attack, etc.), while women had a reduced risk of hypertension. So basically, more sex seemed to be bad for his heart, but good for hers.

But wait… The bigger question is why: Why are men at greater risk for heart conditions just by having more frequent sex? It’s not clear that it’s the sex, because older, sexually active men are also more likely to use medication to boost sexual function and could be straining themselves more to reach an orgasm that isn’t quite as easy to attain as it once was. Maybe the takeaway is that we need to let our sexuality mature with us — take our time, don’t sweat it if the orgasm doesn’t happen, and enjoy the vast array of sexually intimate acts. And if that doesn’t work, I know plenty of husbands who’d simply say: “I don’t care if having sex increases my risk of heart attack, because what a way to go!”

Source: MSU Today — Is Sex in Later Years Good for Your Health?

Should you turn on the lights?

Research conducted by the European College of Neuropsychopharmacology Congress studied 38 male participants with disorders characterized by a lack of interest in sex. They gave them half of them light therapy (exposure to light that mimics the sun’s rays and is used with seasonal depression) and half of them exposure to much dimmer light. The men who received bright light therapy showed increased sexual satisfaction three times higher as well as a jump in testosterone production.

Honestly, this matches one of my theories of why more men have lower sex drives these days. I believe that since many men aren’t spending time outside and in manual labor, they aren’t doing things that used to maintain their testosterone levels and decrease their stress. Whether my theory’s true or not, it appears that sunlight or light therapy would be a good idea for men whose libidos aren’t where they, or perhaps their wives, would like them to be. For you higher-drive wives, maybe you could suggest a daily walk or time together outside more days than not.

Why should college students have all the fun?

Researchers at the University of South Dakota surveyed 706 college students and discovered that having sex in a parked car remains a “fundamental coming-of-age phenomenon.” Sixty percent reported having experienced parked-car sex, and although men reported a higher rate of satisfaction, a strong majority in both genders viewed the experience positively.

Why am I talking about this to married Christians? Because hey, you can do it your car too! Frankly, as you get older, your car is usually bigger and more conducive to having sex without getting jabbed by a gear shift or slammed into the dashboard. You might well own a garage so that maintaining privacy is an easy goal to meet. And you’d probably be surprised how much your body can still bend and move when romance and libido run high. Some of us even own trucks, meaning we have an actual “bed” in our vehicle. Doesn’t that mean we should use it as the word intends?

Cairo University Professor Ahmed Shafik dressed lab rats in pants of different fabrics, then studied how they affected the rats’ sex drive. He discovered that rats in polyester pants got less action than those wearing cotton or wool — a finding that once-and-for-all confirms the 1970s were the worst fashion decade. So throw out your old leisure suits, husbands, because that polyester look is not helping your sex appeal! Go with cotton or wool (or even a mixed blend, I suppose). Although I wonder how those rats would have fared in satin boxer shorts. Do you think they would have become “love machines”? Maybe, maybe not. But you could give it a try.

What do you think about these research studies? What surprised you or shed light on your situation?