What a tough question we have today. It’s from a husband who wants to know how to help his wife enjoy sex with him. I was heartbroken when I found out that she can get aroused but it’s mostly from imagining herself as a sexual abuse victim. Here’s the question:

[My wife] is a very quiet person and finds it hard to express anything verbally in bed or out of bed. Years ago I found out that she was getting high 99% of the time by thinking of abusive situations. She battles that because she knows it is not of God, but her heart mind and body craves for the God gift of orgasm. I also found out that she does not feel much so it may be that there are issues with her clitoris. We have [several] kids so this could be part of the reason, but it has been so many years that she has used wrong thoughts that she is not sure when or if clitoris stimulation was ever the reason for her getting high. We do talk. We do read. Many talk about her exploring that area and understanding her own body and what stimulation gets her going. She may have done this, but she has never admitted it to me. She receives pleasure from me gently kissing and sucking on her breasts. We are both aware that she has the potential to have an orgasm from breast stimulation, but when she gets stimulated it gets to be too much for her and she has never tried to flow with that to see if that might be a way to get to orgasm. So, year after year goes by and she struggles with the moral dilemma of needing and wanting to get high, but seems to only be able to do that with going to the wrong thoughts.

It is very hard for us both. She does not give me clues that I am pleasuring her by touch or sex. When I ask her she says yes. “Do you like that?” – “Yes” – “Is that ok?” – “Yes” So for me it makes me feel selfish. Receiving pleasure and wanting so much for her to receive even more, but powerless to do anything. 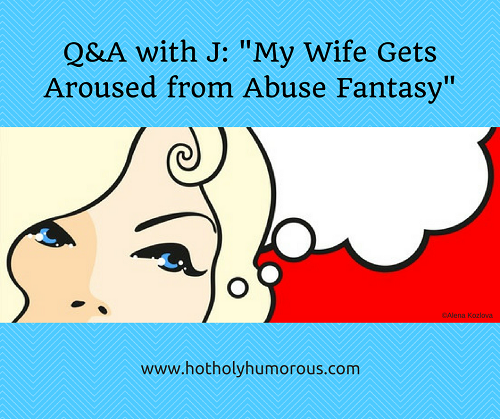 Having written this long about sex in marriage, I know what’s going to show up in my comments section if I don’t address it head-on: How can a loving husband continue to have sex with a woman who is putting herself through abuse fantasies (or nightmares) in her head to get aroused? Because I have to admit that I don’t see how I could continue making love to my husband if I knew he was getting off on images of being sexually attacked.

To the inquirer, I know that may seem harsh, but it’s a question I guarantee someone — perhaps including you — is asking. But when I go back through the question, I sense a strong desire from you to work out this issue. It seems that you’ve talked, read, explored, pleaded, and longed for her sexual setting to change. It’s also seems clear that you’re not abusing her sexually, but that she willingly engages in the marriage bed. Albeit under terrible mental circumstances. And your eight children are definitely a blessing from your physical unions.

So I applaud you for continuing to desire what God wants your wife to have and for seeking it out in whatever ways you can. Yet I also encourage you not to enable these awful experiences for her, meaning that you must figure this out somehow.

As often happens, I wish I could talk to the spouse. The wife is the one with key information that would help to illuminate what’s happening and reveal possible solutions. But since I don’t have that access, I’m going to throw out a few ideas and see if any stick. That is, one or more of these options might be a pathway to getting her the help she needs.

Has she seen a physician about this issue?

Since your wife’s arousal seems fueled by mental imagery, and she reports not feeling much with her clitoris, I’d first want to know if there are physiological issues impeding her sexual pleasure. She should see her primary care physician or gynecologist and ask to be examined with this in mind.

By the way, two important thoughts about seeing a physician about sexual issues:

Was she sexually abused in her past?

Sexual abuse is so confusing, especially for children. A friend who was molested when she was young once explained to me that it wasn’t all bad — that is, since God primed us to experience pleasure when our sexual organs are touched, her body responded positively in some ways to what was happening, at the same time that she felt discomfort and revulsion.

If your wife’s early experiences with sex were abuse, it’s not uncommon for victims to have difficulty differentiating that experience and their sexual arousal. Some survivors report being later aroused by abuse or rape fantasies, and usually feeling shame afterward because they know this is a twisted version of sex. And yet, it’s how their bodies first experienced any kind of sexual pleasure, because their biology just did its job without regard to the circumstances.

This linking of abuse and arousal can continue into adulthood, and the answer to breaking this connection is to heal from the abuse. Your wife should seek help from counseling, a support group, and/or resources like Dan Allender’s The Wounded Heart: Hope for Adult Victims of Childhood Abuse. She will need to relearn sexual responses that are in line with a healthy relationship and God’s design for marriage.

What did she learn about sex?

Another source of sexual abuse or rape fantasies is good girl guilt. Many women were brought up to believe that pursuing or even enjoying sexual pleasure makes you a “slut.” The message could have been direct or implied, but too many Christian wives still have a subconscious feeling that it’s not good to desire or enjoy sex.

Given that your wife seems reluctant to express her pleasure or let breast stimulation continue, even though she gains great pleasure from it, I wonder what messages she received about sex growing up. Was the prohibition against sex before marriage so aggressively preached that she sensed sex wasn’t good even in marriage? Was she told that sex was for the husband, while the wife’s role was surrendering her body to the act? Was she convinced sex’s primary purpose was procreation, and gaining sexual pleasure was selfish? Was she taught that sex was carnal, thus in opposition to the spirituality God desires?

A wife who desires sexual pleasure but feels that getting it is selfish, bad, or impure might have abuse fantasies that allow her to engage sexually without feeling that she’s making the decision to do so. After all, in her mind she’s being forced. During a sexual encounter, such imagery can alleviate the guilt of wanting sexual highs, but of course they result in a different kind of guilt. And this is clearly no way to live a sex life that honors God’s design. If this is the problem, she must confront the wrong messages received and replace them with God’s truth — that sex is good and holy and beautiful within the embrace of marriage.

What does she believe about men?

Another component is what she believes about men. Did her previous experiences convey that men are predators? That a woman’s value is in being used for his sexual pleasure? That a hefty imbalance of power is to be expected in the bedroom? Some women, oh so sadly, believe they are not worth sexual pleasure for themselves; they sense that a man pressuring a woman into sex is how things should go.

That message might conflict with everything she knows about her own husband, but if it’s been implanted deep enough, she can still have that belief. Even if she doesn’t recognize it at a conscious level.  And such a belief obviously keeps her from understand the mutuality of sexual intimacy as God intended. Once again, the answer is to challenge these false beliefs and welcome a better, more truthful perspective of men.

Whatever the cause, I suspect flawed, deep-seated beliefs have affected your wife’s view of herself and sexuality. Uncovering and addressing these problems is really the only way to deal with her situation. Tough as it may be, sometimes the only way out is through.

I’d encourage her to create an intimacy timeline, deal with her sexual baggage, find resources that address her struggle, and pursue outside help if needed. A quality Christian counselor could peel back more of what’s happening and help her through her difficulties.

What’s not okay is settling for the status quo. Sex should never be about abuse, not physically and not mentally. God longs for His beautiful daughter to see sex as He created it — a healthy, mutual sharing of bodies, hearts, and souls in an intimate act that honors Him and strengthens your marriage.