In the United States, June is considered the month of weddings! Because more weddings take place during this month than any other. My wedding was not in June, but I was thinking about the whole courtship, engagement, nuptials business and thought maybe it was time to tell y’all how I met my husband.

Because I love a good story, and this is a great story. Plus it’s got God running all through it.

After graduating from Abilene Christian University with a bachelor’s degree in history, and no teaching certificate, I wasn’t sure what to do with myself. I had abandoned my original plan to attend law school, although I wanted to go graduate school in something. However, I wasn’t ready for that step, so I returned home to get a job and make some money.

I got a job at a law firm as a legal assistant (with prior experience as a legal secretary) and began researching what I wanted to do next. With no strings attached, I concluded that I could move anywhere and do anything, and this youthful moment was the time to do that. 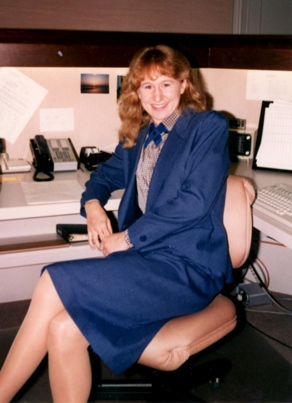 At the office where I worked after college

Having lived in Texas all my life, I hadn’t really been around mountains, and I was supremely curious about that landscape. I concluded I wanted to move somewhere that had mountains (even wrote a song back then titled “I Need Mountains”). Seattle, Washington topped the list. I had friends who’d moved there, and they encouraged me to join them.

But while I worked for money to finance my move, something was happening in Seattle: The job market was declining, and the cost of living was rising. Moreover, I lived in the Piney Woods of Texas where it rains a fair amount, and for every day that it rained where I lived, it rained at least one more in Seattle. I didn’t know how long I’d have to live in my parents’ house and work at the law firm to finance this trip, as well as whether I’d actually like the climate there.

I began to research other possibilities. My priorities: mountains, low to moderate cost of living, good job market. I literally got out a map and identified cities, then gathered information about each. My eventual decision: Albuquerque, New Mexico.

Had I ever been to Albuquerque, New Mexico? No, I had not. But I set my sights there and a few months later, I packed everything I owned into my Toyota Corolla and moved to Albuquerque with only a hotel reservation. 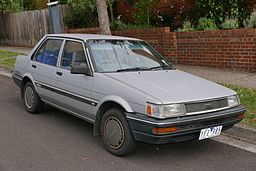 Not my actual car, but it looked a lot like this, photo courtesy of Wikimedia Commons

My father later said that I made it happen because I didn’t know how crazy it was. (He said it nicer, but that was basically it.) I also discovered later that he quelled my mother’s fears by saying that if it didn’t work out, I’d just drive back home.

Now West Texas is known for being somewhat barren, but it is beaten in that category by Eastern New Mexico. I remember driving for hours as I entered the state and thinking, What have I done? At one point, I needed to use the restroom, and there was no place to go. Not even a tree in sight to hide behind. Looking back, I guess it’s true that God sometimes takes you through the wilderness to get to the Promised Land.

After arriving at my hotel — and discovering that Albuquerque is actually quite beautiful — I did four important things: toured the city (including a trip to the mountaintop on the Sandia Peak Tramway), applied for jobs, started attending church, and hunted for an apartment. 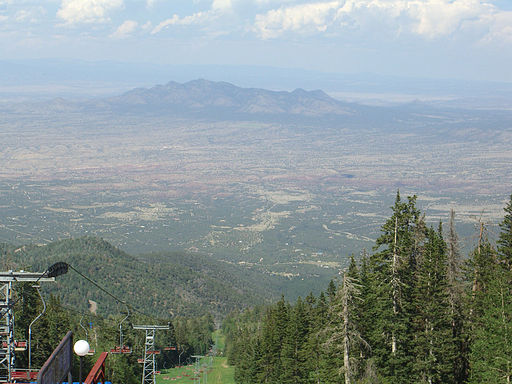 View of Albuquerque from Sandia Peak, photo by Nightscream via Wikimedia Commons

I narrowed my apartment choice down to two places. Objectively speaking, I should have chosen the slightly nicer complex, although I would have to furnish it myself. But when I toured the other complex, I had this strangely positive feeling about it. I chalked it up to this apartment being already furnished and the hospitality of the manager, but looking back, I think something else was going on.

Within three weeks, I had secured a secretarial job at a law firm, moved into the apartment, and began regularly attending a large, local church where the singles group was inviting and active. Mind you, I’m an introvert, so this was all really hard for me … but I was determined to make friends and thrive in my new, chosen home.

With that in mind, I headed to a church singles devotional at a member’s house. I remember the trepidation I had stepping across the threshold, or rather forcing myself to step across that threshold. I would have much rather been at home eating drive-through food and reading a book. But I’d come this far, and I needed to settle in and get to know other Christians.

A few minutes into the evening, a guy walked in, wearing a light-colored shirt, shorts, and a knee brace. He was tall, dark-headed, with glasses, and obviously athletic given his build. I didn’t linger on him, though. I was simply trying to keep my head above water in a group of people I didn’t know. (If you’re a true introvert, you know what I’m talking about. If you’re an extrovert, just trust me — we like people, but it takes time to acclimate.)

After the devotional, we all ended up in the kitchen, and looking at this guy more closely, it struck me that he was familiar. That’s when he said something to me like, “You look familiar. Do we know each other?” We ran through all the possible connections we could have — church affiliations, college attendance, mutual friends, etc. Nothing, not a thing. But where else could I have met this guy? I’d moved to a city three weeks prior in which I knew nobody.

Finally, he asked, “Where do you live?” You might think this is a question a young lady shouldn’t answer to a relatively strange man. But I don’t recall feeling any fear or hesitation; something about this man put me at ease. (Not that that’s always a good indicator; I’m just recalling my story.) I shared the name of my apartment complex. He answered, “That’s where I live. Which building are you in?” I shared my building number. He answered, “That’s the building I’m in. What apartment?” I shared my apartment number, which was C. He answered, “I’m in apartment D. I’m your next-door neighbor.”

And that’s when it hit me. I’d seen this guy before — on a Sunday morning wearing slacks, a dress shirt, and a tie with his Bible in one hand and taking out his trash with the other. I remembered that moment, because I’d thought how nice it was to see a single man heading out to church as I was.

Our church was big enough that I didn’t recall seeing him there, but we had spotted each other around the complex. And thus began a friendship.

Since I didn’t have a television at the time (it wouldn’t fit in the car), he invited me over to watch shows with him. I cooked him dinner, and he surprisingly still stuck around. He showed up at my doorstep one day with a sack from Wal-Mart and pulled out ice-cube trays he’d bought me, because I’d mentioned that the furnished refrigerator didn’t come with enough trays (my very first gift from him). I played my guitar (which I did fit in the car) and sang him a couple of songs I’d written. We talked about our family backgrounds, church history, and Star Trek: The Next Generation, which we were watching together.

One night, while sitting on my couch, he kissed me.

Later I asked him where and when we had our first kiss, and he said something different that was totally wrong. Because if my memory is a sieve, his is a drain. But that’s okay, because as long as we kept kissing, we’d have plenty of memories to choose from. 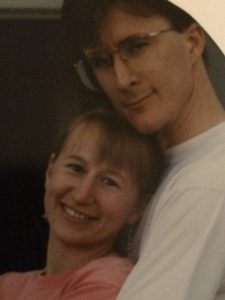 Five months after we met, and about three and a half months after we started really dating, he proposed. Or I should say that he asked me to marry him. There was no on-the-knee, “Will you be my beloved wife?” moment. Rather we were shopping in the mall one day, he pulled me into a jewelry store, and about a half hour later he purchased one of the engagement rings I’d tried on. As we walked out, he said, “Oh, by the way, will you marry me?” Ah, my romantic fella!

Three months after we got engaged, we got married. Oh yes, we did. EIGHT MONTHS from meet to marry! With a son in college, this now horrifies me. What we were we thinking? Just eight months?!

Happy (and with no idea what we’re getting ourselves into)

But remember how I said that God was a main player in this story. What I didn’t tell you is right before heading to Albuquerque, I’d sworn off men. I was done with dating, with looking for the right guy, with even letting my heart consider a relationship. Consequently, I think God’s approach was to slam me upside the head with a fiancé and get me hitched before I could sabotage my destiny. God’s pushy that way.

If you’ve ever tried to resist Him, you know what I’m talking about.

Sometimes I do wish my husband and I had waited a little longer, gotten more premarital counseling, and spent more time with our respective families to ease that transition, but the marriage itself was a good idea. And for the rest of my life, I can say that I married the boy next door.

Now share your meet story in the comments. Hopefully, in far fewer words than I took. Just give us the highlights of how you and your spouse first met. I’d love to hear, and it’s always nice to remember what made you choose your special someone.