Today we’re talking about birth control. The reader has an interesting scenario in which other birth control methods aren’t good options, so condoms are what they are using. However, condoms are also affecting their intimacy. Here’s her specific question:

Hubby and I have always had a wonderful and frequent sex life and I’d like to keep it going! However, hubby has a difficult time finishing with condoms (he does perfectly fine without). He just doesn’t get as much friction and doesn’t enjoy the feeling (or lack thereof). Obviously, I don’t either. Do you have some tips for helping him finish and enabling us both to enjoy the experience a little more? 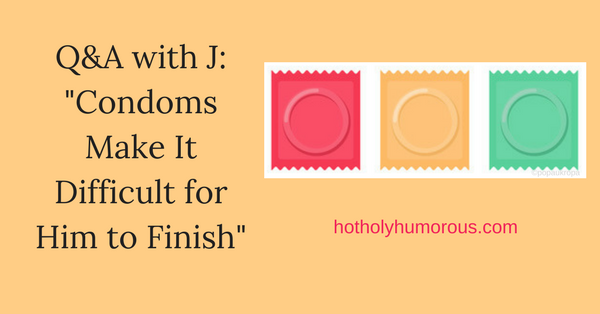 You know, I’m always amazed at how often condoms are touted as the perfect contraceptive method. Yet a fair number of people report what this wife says: Condoms lessen the friction and can make it difficult for him (and/or her) to finish.

So if condoms are your best, or only, birth control option, what can you do to reach climax?

If condoms are your best, or only, birth control option, what can you do to reach climax? #marriage Click To Tweet

There is a large variety of condom brands, sizes, and types — not to mention novelty condoms (e.g., glow-in-the-dark). Experiment with different condoms to see what feels best to both of you.

Considering the issue is reaching climax, first get a good fit. Yes, I know some guys would like to boast that they require the jumbo-sized, hung-like-an-elephant condoms. But in reality, an average-sized penis can more than get the job done. And wearing a too-large condom can lessen sensation. The condom should instead be snug on the penis, feeling like a second skin.

Then look for an ultra-thin condom so that you can keep as much sensation as possible. Also, brands make comfort fit or “pleasure-shaped,” which means it’s tapered at the bottom and wider at the tip to allow for that tight fit around the shaft and more room around the head.

Finally, one interesting suggestion is to squeeze a small amount of personal lubricant into the tip of the condom before putting it on, with the idea that the squishy feeling mimics the feel of a lubricated vagina.

The space between the bottom of his penis and his anus is the perineum, and massaging it can provide additional stimulation that can help him get over the edge. Some suggest the prostate gland is the male version of a G-Spot, and stroking the perineum can reach that sensitive spot.

But adding your hand to that sensitive area beneath his penis can assist his arousal. You can read more in this post: Making the Most of His Manhood.

When you’re reaching for that elusive climax (for him or her), sexual position can make a difference. While there a gazillion positions out there, I go into all you really need to know about trying new positions in my book, Hot, Holy, and Humorous: Sex in Marriage by God’s Design. 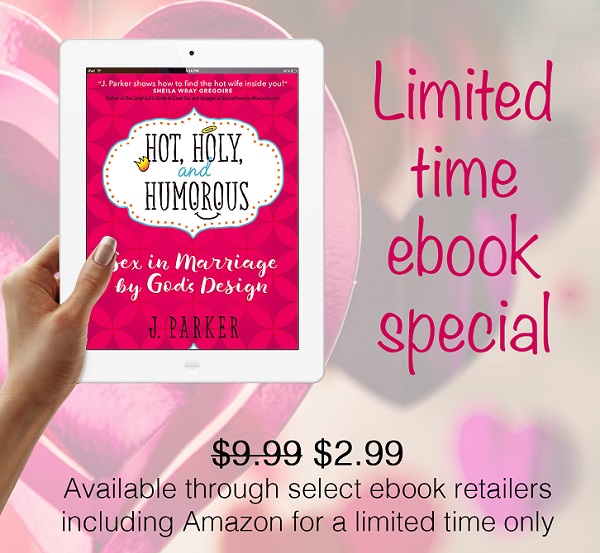 Shift around and give various positions a shot. You might even want to try a wedge pillow that can help you get into the right angle.

What is edging? I’ve been meaning to write about this technique forever, but I just haven’t gotten around to it. Essentially, it’s getting right up to the edge of climax, then pausing or lessening stimulation; then building up again and dropping back down; and going up again until the tension is high enough that climax is more likely to happen.

How can he use edging during intercourse? Your husband can thrust for a while as he feels the tension build, then pause and hold still for several seconds, then continue his movements, pause again, and again begin thrusting again, etc.

And yeah, I have chapters in my book too that go over how to use your hands, mouth, and other body parts for sexual intimacy. It’s a great resource for fresh ideas!

If you already know things he likes, give those a try during intercourse. Just add that supplemental affection so he’ll feel not only the pleasure with his penis but elsewhere on his body as well.

Words are powerful. They convey our feelings, create images in our minds, and set a mood with our tone, volume, and pitch. I’m always a bit amazed by how much of Song of Songs in the Bible involves the husband and wife talking to each other about their bodies and sexual intimacy.

Some spouses are big talkers during sex, and others can only come up with a few coherent words during a sexual encounter. But even a few sexily spoken words could be a big turn-on.

What can you say?

What about “dirty talk”? I believe you can do a lot of sexy talk without having to use words that you would never elsewhere use (see Talking Flirty vs. Talking Dirty). The couple in Song of Songs were very frank with each other about their sexuality, yet they also used symbolic and beautiful language to express their eroticism. And Ephesians 5:3-4 says, “But among you there must not be even a hint of sexual immorality, or of any kind of impurity, or of greed, because these are improper for God’s holy people. Nor should there be obscenity, foolish talk or coarse joking, which are out of place, but rather thanksgiving.” Make of that what you will.

Whew, six suggestions! Surely something in that list will help. Riiiiiight? *crossing fingers*