It’s Saturday, meaning I’m back with another high-five! That is, five somethings that I want to share with you about sexual intimacy in marriage.

Today I want us to ask some questions about our sex lives. These are hardly the only questions you could ask, but they are five important ones that might illuminate where you are, where you want to be, and how to get there. Let’s go for it! 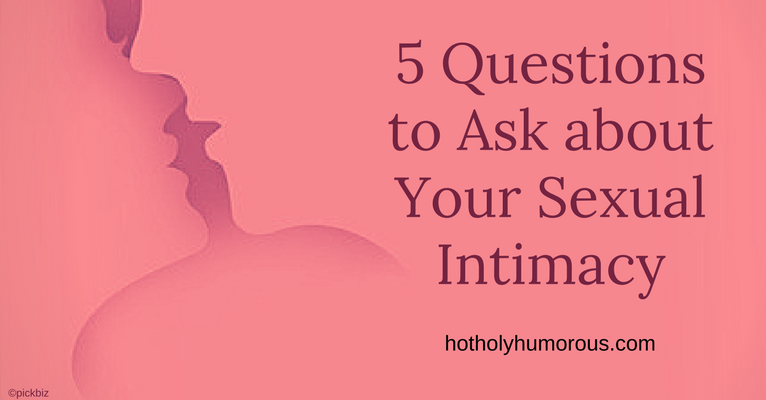 No, not the dark or the Big Bad Wolf or the very idea of a swallowing a spider in your sleep. I’m talking about what fears you have about sex.

But even though these fears change how we view the marriage bed, we don’t often delve into what they are, why we have these fears, and if they’re real. It might not be as bad as you think. For instance, that swallowing-spiders story? Sleep soundly — it’s an urban legend. Likewise, your fears could either spotlight areas to work on or be worries that you can safely let go of and choose a better reality instead.

2. What does my spouse really think about our sex life?

One of the biggest issues I see in marriages that struggle with sexual intimacy is one spouse thinks they know what the other feels and believes about sex … but they don’t. She thinks he just wants a physical release, but he wants emotional connection through sexual intimacy. He thinks she doesn’t ever want to have sex, but she does want sex if it could be more mutually satisfying….

I could give more examples, but the point is that at least some of your assumptions about your spouse are likely wrong. We tend to look at a situation and think, If I said or behaved like that, it would mean X. But it doesn’t mean X for your spouse, because they’re a different person.

Take a look at all of the messages your spouse has given you about your marriage bed. For instance, if you think he’d rather be with a prettier woman, but he’s asked to see you naked, wants to kiss and touch you, and says positive things about your body, that’s probably the truth about what he thinks. And be willing to ask your spouse, with an open mind and heart, what they think. You might find out something you didn’t know.

3. Would I want to make love with me?

A while back, Kevin A. Thompson, minister and blogger, wrote a post titled “I Wouldn’t Sleep With You Either.” It was addressed to husbands who wanted to have more sex, but there was good reason why the wife wasn’t obliging. If you want to read the post now, I’ll wait while you do that. (Whistles and taps fingers on desk…)

Okay, sometimes the reason your sex life isn’t going well is because the rest of you isn’t all that peachy. Yes, I know that’s a hard thing to hear. But ask yourself this question: If we switched places, and all I saw of my spouse is what he gets from me, would I want to make love with that person? Would that be an appealing prospect?

Sometimes the reason your sex life isn't going well is because the rest of you isn't all that peachy. Click To Tweet

This is why I often tell people who whine and complain about sex to Stop It Already. Even though there are issues that need to be addressed, who wants to bed someone who’s always throwing a conniption fit? By being a prickly person to be around, you could be making things worse. But if you love your spouse like a walking 1 Corinthians 13:4-6 (“Love is patient, love is kind, etc.”), that’s really attractive. And then if/when you work out the other issues, you’re rather bed-able.

4. What’s the number one area you need to nurture?

One of the three points above may have hit on an area you need to work on. But oftentimes, the marriage bed has several areas where improvement could be made. Whether you’re in the sexual doldrums or riding high, you can always find something to nurture.

But rather than taking a scatter-shot approach, focus on a single target at a time. What’s the number one area you need to nurture? If you can identify it, then you can tackle that next step and see some progress in your sexual intimacy. Step by step, target by target, you can build greater intimacy in your marriage bed.

Now your number one area might not — or probably won’t — be your spouse’s number one area. And that’s okay. Work on your stuff, and be willing to cooperate with your spouse’s. But know that you don’t have to work everything out all in a day. That’s part of the beauty of God’s design for sex in a covenant marriage — you have a lifetime to learn and improve and experience the intimacy He longs for you to have.

This question may sound like a repeat, but it’s not. Knowing what area you need to nurture isn’t the same as identifying the specific action you’ll take. It’s the difference between saying, “I’m going to exercise more,” and “I’m going to take Zumba classes three times a week, starting tomorrow.” And then paying for the classes. Goals are great, but they don’t mean much unless and until you list specific actions you’ll take to reach them.

Whatever you decide to focus on, identify the next step to take. And then take it.

Now what questions do you think couples should ask about their sexual intimacy?