Sex can be messy.

Some wives complain about the messiness of sex. You can put a towel underneath yourselves while you’re making love, keep wipes handy at your bedside, take a shower or bath after sex, or even use a condom if you really want to cut down on fluids.

But I like to think of the sexual experience more like art. Have you ever seen an artist’s studio? Or a preschool room where children have been finger-painting? It takes a bit of mess to create a masterpiece. You can always clean up later.

However, we wives can’t escape the law of physics: What comes up must come down. 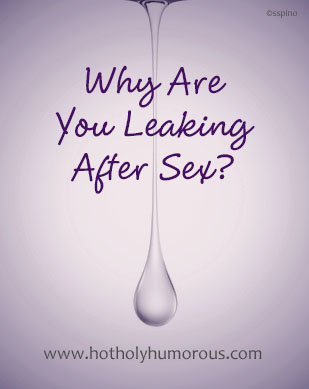 So when your husband showers his ejaculate into your vagina, gravity demands that some will spill back out later. Even if you’re trying to get pregnant, only about 5% of his ejaculate is sperm while the other 95% is strictly semen.

Leakage can happen right after sex, when you head to the restroom to urinate and a glob of stuff comes out as well. But it can also happen the next day as you’re standing in front of a room of coworkers making a passionate presentation and you feel a sudden wetness in your undies. Seriously, could the timing be any worse?

I’m just letting you know that (1) this is completely normal, and (2) if the mess irritates you, find ways to minimize the likelihood of leakage:

Some of the leakage immediately after sex could also be from you. Some women have been known to ejaculate, or as some crassly call it “squirt,” during sex. I’ve written about the shejaculation experience here. But your fluids aren’t likely to comprise much of the leakage, since most of what a woman puts out comes all the way out.

One last thought, ladies: If you think this sounds supremely unfair, many men experience semen dribble after sex. It’s a bit like when you turn off the water hose and several drops plop out before the flow stops completely.

But it’s nothing a towel, a shower, a pad, etc. can’t take care of. And you shouldn’t leak more than 24 hours after intercourse. Usually, it happens within a few hours of sex.

Do you have any of your own tips for handling leakage after sex?