I met Rebecca Lemke when she contacted me about appearing on her podcast, The Scarlet Virgins. Her book about her experience in the Purity Culture shares the same name. And I was impressed with how she was speaking up about her experience, both the good and the bad.

We had a wonderful discussion, which will appear soon on her podcast. But in the meantime, I asked her to return the favor and talk to my audience about what she wished she had experienced instead.

This is great information for two reasons:

I hope you’re entirely convinced now to read every word below, because I’m eagerly turning things over to Rebecca.

My husband and I are currently making our way through the book Making Chastity Sexy by Christine J. Gardner. A generous friend sent it to me because of my interest and extensive work on purity culture. This book has sparked some discussion between my husband and me about the way we would have liked sex and relationships to have been approached in our youth and some of the ways in which we hope we can approach these things with our son.

A point my husband made recently is that much of what we learned was through the Christian pop culture. Yes, there was a lot of in-your-face rhetoric with the purity rings and conferences and concerts, but the fear we learned was subtle in a lot of ways. It crept in on us more through the subtext within the culture and the way people acted than what was actually said.

Which, to be sure, was fear-mongering in many respects. At least in my case, where crushes were considered an emotional STD and therefore you were to marry your first one to avoid contaminating anyone else or yourself.

The number one thing I wish there had been more of is a culture of practicality surrounding sex. One point Gardner’s book makes is that sex was sold as a product, specifically amazing honeymoon sex, if you paid the price of waiting until you were married. A virgin body on your wedding night was made into a commodity to sell abstinence until marriage.

It seems abhorrent to me that information about precious gifts of God (our bodies, our sexuality, our marriages) was spun to produce an outcome rather than just giving us the facts and the Word of God. Why, on God’s green earth, was that not enough?

Instead of trying to make false promises and add to Scripture to up to ante to gain compliance, I wish the Powers That be would have spent time teaching us about how sex and marriage actually work.

Instead of trying to make false promises and add to Scripture to up to ante to gain compliance, I wish the Powers That Be would have spent time teaching us about how sex and marriage actually work. - Rebecca Lemke Click To Tweet

Purity culture has made sexuality this big bad thing that only becomes good the moment you say “I do.” Even going so far as to say noticing beauty is inherently sinful, which has caused problems for many people in the path of this idea. The body is bad, the spirit is good (amazing how tenacious old gnostic ideas are). Except when you get married, then somehow the body is magically good.

This kind of odd rhetoric combined with lack of any education on puberty, attraction, sex, etc. makes it easy to see sexuality as this conceptually blurry, overpowered bad guy. Appropriate information contextualizes sexuality so you know and believe it is a good thing. With this foundation, you also happen to understand why it is prudent and God-pleasing to exercise it in the proper place within marriage.

Numerous men and women have contacted me since my book came out to tell me that, since being fed a diet of purity culture’s high expectations, they have been extremely disappointed with the realities of sex. This is an issue compounded by exposure to pornography, which is something many of these individuals have experienced as well (oftentimes as the result of an attempt at sexual self-repression that backfired).

Sex isn’t always wild and crazy. You don’t always break a bed frame or wake all the neighbors up. Sometimes pregnancy complications arise and pelvic rest is ordered. But to hear the talk at a purity event, you wouldn’t know this! The existence of this blog and others like it helps to combat this issue, but nothing can replace having practical expectations laid at the beginning.

My husband and I have made it a point to be an open book with our son so he doesn’t have to wonder or feel ashamed or scared about sex. We make it a point not to idolize sex or manipulate its importance in his mind by downplaying or overemphasizing its role in our lives.

Instead of growing up in a subtext and culture of fear and lack of knowledge, I wish we would have had the opportunity we are trying to afford our son, to be surrounded by stability, certainty, knowledge, and respect for sex within the context God created it to be. 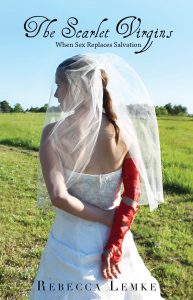 The Scarlet Virgins is a memoir of Rebecca’s journey through the ramifications of spiritual abuse and purity culture, wrestling with the temptation of apostasy, the descent of herself and others into the depths of addiction, alcoholism, anorexia, depression, self-harm, and suicide. She outlines the dangers of finding your identity in your purity or ability to follow the Law rather than in Christ and what he has done for you.

For more information about Rebecca, the book, and her podcast, visit The Scarlet Virgins.

Related posts:
Talking to Your Kids about Sex: No More One & Done
Is “Don’t Have Sex” Enough for Teens?