I didn’t know her, but she hailed from my town and attended my older son’s university. So there was a lot of buzz about her death, and I knew several people with connections to this young lady. I looked up her obituary and was surprised to see that she had chosen a life verse — but not one you might expect from a single, college-aged woman. Rather, it was a verse I’ve cited many times before from the Song of Songs: “You are altogether beautiful, my darling; there is no flaw in you” (4:7). 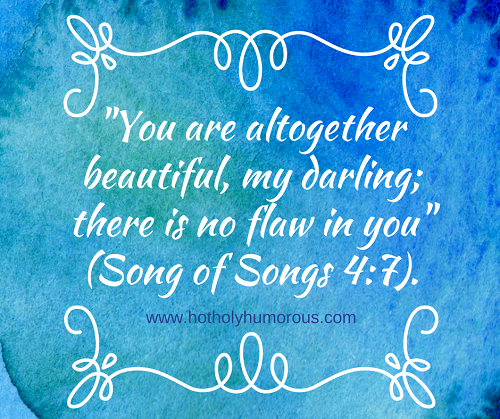 How wonderful for this young believer to settle so quickly on the truth of her value in God’s eyes! For all those daughters out there worrying so much about their appearance or trying too hard to be like someone else, I pray that they can learn and accept that they are “altogether beautiful.”

There is definitely this larger meaning, but the context of the verse itself is a husband speaking to his wife. After going through a long list of her physical attributes that the husband finds captivating (eyes, hair, teeth, lips, etc.), he concludes with that statement: “You are altogether beautiful, my darling; there is no flaw in you.”

Look, I never saw his wife. We have no idea what she looked like. But I can pretty much guarantee she had a flaw. If nothing else, she had a mole in a weird place or one hair on her arm that grew longer than all the others or stubby toes that would never grace a pedicure ad. Because everyone has some flaw.

Yet her husband didn’t see any of that: He saw her as flawless.

They say that love is blind. I don’t think that’s true, but it is rose-colored. That is, when you love someone so very much, you don’t see all their flaws. In your mind’s eye, your darling is altogether beautiful — flawless.

It’s the reason parents of “ugly babies” think their kids are the most precious things ever. It’s the reason we put our five-year-old’s terrible art on the refrigerator and beam with pride. It’s the reason teenagers overlook each other’s awkward stages and date anyway. It’s the reason you used to not mind so much when your husband — then boyfriend — wore that ratty Green Bay Packers T-shirt. It’s the reason you didn’t think anyone could possibly be more handsome than your groom standing at the altar and waiting for you to walk down the aisle.

Somehow, we seem to think it’s “growing up” or “getting realistic” to lose that lens. But I don’t think so. I think this verse shows what God intended — that as we deepen our love, we should become even more starstruck by our beloved’s beauty.

Maybe it becomes more of a choice we make: to overlook our spouse’s flaws, to focus on their amazing attributes, to remember that we have a special bond (my darling) that colors how we see one another.

What if you memorized this scripture and said it about your husband? Or wife? What if you practiced it in your mind? Even said it aloud sometime? How might that encourage you toward an attitude of appreciation? Toward gratitude for the spouse you have?

Say it with me, and say it about your spouse: “You are altogether beautiful, my darling; there is no flaw in you.” See your husband the way love sees him.

And believe he sees that in you too.

READERS, CHECK OUT MY BIG NOVEMBER GIVEAWAY! JUST CLICK THE BANNER BELOW. DETAILS ARE AT THE END OF THE POST.