The question today is fairly general, with a reader asking me to tackle arguments and confrontation. Since plenty of disagreements in marriage center around sexual intimacy, this seems like a good question.

Maybe you could address the question about how to handle arguments. I know for us, they would become quite confrontational. She’d stand there with her arms folded accusingly, and the volume level of the “conversation” would begin to ramp up, and it would all go downhill from there.

It has taken me decades to understand how to deal with this…but now, we have a process in place to handle disagreements…

A wife really shouldn’t want to get into a confrontation with her husband, because if there’s one thing men are good at by (their sinful) nature, it’s fighting to win. And we can really pull out all the dirty tricks in order to be victorious. It’s wrong, I know, but that’s our worldliness coming out.

It took us longer than a decade to figure some things out too. However, in my marriage the one willing to fight long and hard was me.  I was more confrontational, while hubby withdrew when things got super-hairy.

During our “bad years,” I read about a bazillion marriage and self-help books. Not to mention hours and hours searching scripture for the magic marriage duct-tape that would patch all the rifts in our relationship. Let me summarize my takeaways and what worked for us. 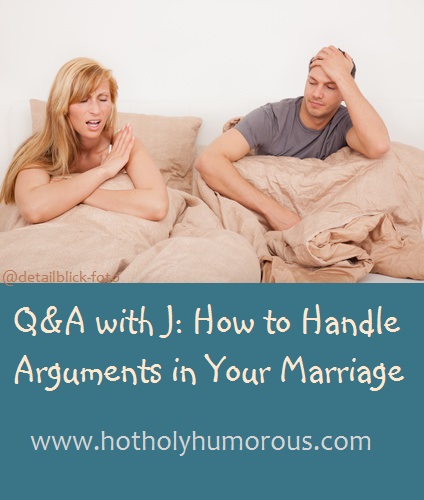 Respect how your spouse best handles disagreements. For double-digit years, we played this terrible argument game in which I insisted on talking everything out and settling issues as they arose, while my husband bolted away from conflict and withdrew into what he considered a more peaceful mode of silence. The more I confronted, the more he withdrew. The more he withdrew, the more I confronted. What a horrible cycle!

My position was backed up by Scripture, I’d declare: “Therefore, if you are offering your gift at the altar and there remember that your brother or sister has something against you, leave your gift there in front of the altar. First go and be reconciled to them; then come and offer your gift” (Matthew 5:23-24)” and “Do not let the sun go down while you are still angry, and do not give the devil a foothold” (Ephesians 4:26-27).

My husband’s perspective was backed up by other Scripture! “Don’t sin by letting anger control you. Think about it overnight and remain silent.” (Psalm 4:4, NLT) and “A fool vents all his feelings, but a wise man holds them back” (Proverbs 29:11). Not to mention Proverbs 21:19: “It is better to live in a corner of the housetop than in a house shared with a quarrelsome wife.”

We were so entrenched in getting what we wanted and needed. Instead, we should have paid attention to what love really looks like, even in arguments: “[Love] does not insist on its own way; it is not irritable or resentful” (1 Corinthians 13:5). We’ve since figured out the better way is for each of us to seek out the other’s good in how we argue.

I watch for when he’s getting emotionally flooded and let him have break time. He knows I will need to talk things out more than he does and allows for that. Each of you must consider the other and give ground about how you argue in order for your disagreement to still happen in the context of respect and love.

“Do nothing out of selfish ambition or vain conceit. Rather, in humility value others above yourselves, not looking to your own interests but each of you to the interests of the others” (Philippians 2:3-4).

Stop arguing about how the other feels. One of the absolute worst things to say is “You shouldn’t feel like that, so stop it.” Oh, how I wish I could simply turn off my emotional responses like the latest bad-idea reality show. Newsflash: Feelings just happen. They can be based on truths or errors or lies, but feelings themselves won’t  simply leave by willing them away. So stop arguing about how the other feels. Instead, tackle why they feel that way. Get to the underlying issues.

Now what if these two are married to each other? And they spend years arguing about how they feel about sex? But the issue isn’t their feelings, which are understandable under the circumstances, but their sexual baggage, their needs and values, their misunderstandings, the wrong messages they’ve believed about sexuality.

Make every effort to draw out the real issue to understand what’s causing your spouse to feel this way. You might find you’re way closer than you think when you begin to ferret out the core problems and work toward solutions.

Look for mutuality. This one’s the brainchild of Steven Covey, who wrote the wonderful book 7 Habits of Highly Effective People. If you haven’t read it, go get your copy. Two of his habits made a real impact on how I approached disagreements with my husband: “Seek first to understand, then to be understood” (which is dealt with better in the previous point) and “Think win-win.”

Too often, we think in terms of win-lose when arguing with our spouse. but from a biblical perspective, “…the two are united into one” (Mark 10:8). If you’re one, then her losing means he loses, and him losing means she loses. Even if you feel like you’ve won an argument, your other half and your relationship could lose — meaning you lose.

Approach disagreements with the goal of both of you feeling good about the resolution. That doesn’t mean you both win every time. Sometimes one of you gives up their position, but feels okay about it because they understand better or get something else in return or simply feel good about being listened to before a decision was made. Other times you find a reasonable compromise. And sometimes, you simply find a third way.

Regardless, the experience itself was a win for the relationship, not a horrible interchange in which you got knocked out in the marriage boxing ring. If you lose like that, you’ll build anger and resentment toward the person who dealt that knee-buckling blow, aka your spouse. Instead, you should walk with something you can feel good about — a win-win for both of you.

I have more on this subject, but if I said it all, this post would be ridiculously long. I’ll summarize that I also believe setting is important and how you communicate with one another matters. For more on those, check out How to Talk about Sexual Problems with Your Spouse and Are You Sure You’re Communicating? Also, What Detractors Have Taught Me about Resolving Marriage Conflict.

What tips do you have for successfully navigating marital disagreements? Where do you still struggle?