I don’t know who gets to name sex acts, but whoever was in charge did a poor job. If you don’t use crass terms, an approach I recommend, you’re typically left with either the scientific term or common slang. Oftentimes, neither of those is appealing.

Now I’m also a believer in symbolic language, a la Song of Songs, but forgoing talk of fruit and gardens for the moment, let’s talk about five sex words I’d really like to change. 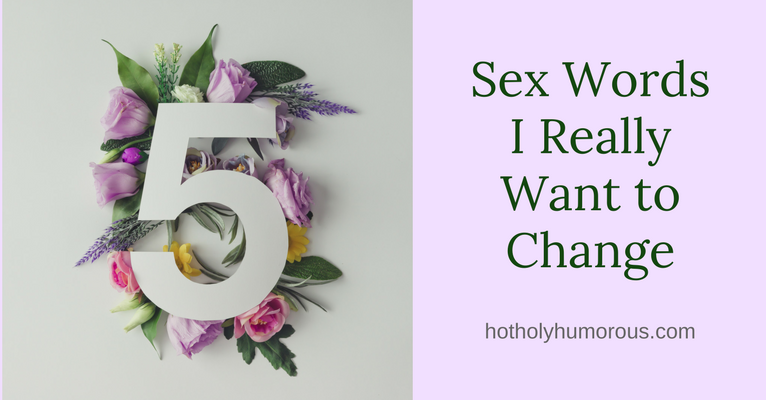 Intercourse literally means to run between, meaning a message conveyed back and forth. It was originally used to talk about trade, then social communication, and finally some misguided person in the 18th century coined the term “sexual intercourse.” Of course, that got shortened to intercourse, and now we’re stuck with it. Even though it sounds about as clinical as one can get.

Oh, I take that back. There’s also coitus and copulation. How do these people manage to make a sweaty, sexy, super-fun experience sound like a boring professor’s lecture? No wonder people have coined other phrases for this act — everything from “make love” to “the mattress mambo” to “the beast with two backs” (thanks for that one, Shakespeare).

One other option to refer to simple intercourse would be to talk about marital congress. Which is actually a nice phrase, given that congress is a compilation of roots that mean “to walk” and “together.” Unfortunately, as an American, I’d argue that our Congress has put at risk, or even ruined for some, the positive connotations of that word altogether. Alas, we shall move on.

Who knows where we got this term! There’s certainly no blowing involved. Unless you’re talking about that final moment when your husband ejaculates, and you could yell, “Thar she blows!” Actually, don’t do that — his penis is neither a whale nor a she.

Also, I object to the word job, as if I got hired to do this task or have to roll up my sleeves and put in 9-to-5 on this goal.

I’ve both written and talked about how terrible this name for a sexual position is. What wife wants to be compared to a dog?

But when I try to get around this, I end saying stuff like “rear entry,” which can get confused with something else that I definitely don’t mean. Not to mention that rear entry doesn’t sound appealing either.

What should we call this sexual position where a husband inserts his penis into his wife’s vagina from behind? I’m kind of at a loss. (And do not Google this. I foolishly did, and immediately clicked away from three sites that were not good. No visuals, just words, but trust me on this.) Maybe we could try the kneel & squeal, since that’s what could happen with husband and wife when you try this position.

The etymology of this word is just fine, with it meaning to set up or erect — exactly what happens to the penis when it’s aroused. But it also sounds unnecessarily formal. Perhaps because the most common occurrences of the word erection these days is in commercials for erectile dysfunction drugs (“If your erection lasts more four hours, call your doctor”).

Of course, there’s the tried-and-true hard-on, as well as boner (usually considered a crasser term), and stiffy. Or you could get creative with full salute or pocket rocket. Yeah, despite my issues with the clinical sound of the term erection, I’ll probably keep using it rather than adopt any of these terms as my go-to word.

I also considered revisiting the word penis, but it’s not such a bad-sounding word and there are a gazillion other words for that body part. Meanwhile, we’re all stuck saying vagina to name that canal wives use for marital congress. Indeed, vagina literally means sheath, like the sheath of an ear of grain; that is, hull or husk. Guess that makes the husband’s part the sword or an ear of corn. Weird.

Regardless, vagina isn’t a pretty-sounding word for an area the Bible refers to in its talk of a garden. Not that I’m suggesting we suddenly all call women’s vaginas gardens. If I tried that on this blog, I’d have to explain the meaning nearly every time.

Instead, when referring to sex, I vote for calling it the tunnel of love. You know, like those old amusement park rides where lovers sat in a two-person boat and entered a dark tunnel to experience private, intimate interaction. I can already hear all the husbands saying, “Oh yeah. Best. Ride. Ever.” What do you think? Would tunnel of love catch on?

And what other ideas do you have for words you’d like to change or synonym suggestions for the ones I mentioned?

Note: No R-rated comments. Some of the words I used here are probably uncomfortable for some readers already, and I want us to be lighthearted but also responsible in how we talk about God’s creation.