I recently read a great blog post by Kevin A. Thompson, The Most Frustrating Moment of Marriage, which involved a miscommunication.

And it reminded me of my own recent story with my husband.

We were at a Tex-Mex restaurant (yum!), eating fajitas and conversing about this-and-that. Hubby was also, given the large-screen TV nearby, watching the World Cup. I mentioned I’d been nervous that day because my outfit involved wearing two shirts that covered everything and what-not, but I wasn’t wearing a bra. Without that familiar feeling of a bra, I felt a little uneasy in public — like I might lean over a bit wrong and show something I shouldn’t show.

To which my husband said something like, “So what if you do? You worry too much.”

Immediately, my feelings went from unease to emotional hurt. My heart sank to my stomach (along with my tortilla chips and salsa). Had we hit a point in our marriage when my body was no longer special? Was he was okay with me giving a peep show? Did he care about me so little? Was the magic over? (Yeah, yeah, a bit melodramatic. I know.)

I slid away from him on the booth, he kept watching futbol, and we didn’t interact much after that. A few minutes later in the car, I revisited the subject. I recounted how earlier in our marriage, he’d asked me to get rid of a cute, little miniskirt (emphasis on little). I was young and didn’t understand men’s visual acuity that well at the time, but his request was so out of character, I figured it was important to him and obliged. After a while, I appreciated and even cherished that memory — how my husband wanted to keep my private and hinting-at-private areas within our marriage. That made me feel special, valued, treasured.

And now he was throwing me to the wolves and their steely, hungry eyes.

We went back and forth about our feelings for a bit, until he finally said, “I don’t want anyone to see anything, but you’re freaking out about this, like it would be horrible if someone saw your bra strap.”

And my husband was back.

Mind you, once again, I was dressed modestly, with nothing showing and nothing likely to show, but my story demonstrates how easily a couple can argue about a misunderstanding. He just hadn’t heard my original statement. (He was, after all, watching the World Cup.) 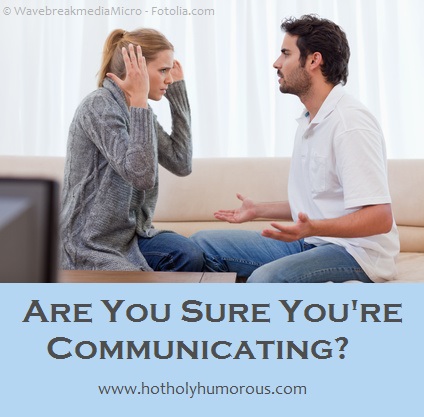 My own cautionary tale involves modesty and keeping yourself only unto your spouse. But there’s opportunity for plenty of other misunderstandings regarding marital intimacy.

You can see how this happens. We communicate poorly, or only part of our message is received. And then we’re in conflict.

It’s never fun to argue with your spouse about sexual issues, but it’s kind of silly to argue about sexual non-issues — things we never said or intended. You may eventually get to an Emily Litella moment like we did, or you may never get on the same page and keep approaching your problems with erroneous assumptions.

So what can you do to avoid misunderstandings?

Slow down the conversation. When we feel hurt and sense conflict coming on, we tend to heat up, open our mouths, and let ‘er rip. Instead, when you feel that unease rising inside you, take some deep breaths and slow your words.

“In the multitude of words sin is not lacking, but he who restrains his lips is wise” (Proverbs 10:19 NKJV).

Make sure you’re listening. Are you really hearing what your spouse is saying? Or are you looking for points of disagreement or an opportunity to butt in with your own perspective? Pay attention to your beloved’s words, facial expressions, and body language. Make your focus figuring out what’s happening with your spouse.

“To answer before listening — that is folly and shame” (Proverbs 18:3).

Ask for clarification. See if you’re getting it right. Obviously, if I’d asked early on, “So you don’t care if I bare my breasts?” there’d have been no misunderstanding or argument between my husband and me. (Of course he cares if I bare my breasts — he wants them bared to him only and often!) If you’re surprised or hurt by something your spouse said or did, probe a bit to see what’s going on. Clarify your understanding.

“By wisdom a house is built, and through understanding it is established” (Proverbs 24:3).

Repeat back your understanding. When you think you’ve got it, say it back. If your spouse says, “No, that’s not it!” then keep talking until you do get it. Unfortunately, we often make our first goal winning the argument or expressing our own feelings, but our primary goal should be getting on the same page about what the problem is. When you agree on a diagnosis of the problem, you’re far more likely to work together toward a mutually satisfying resolution. Or when you finally get your understanding right, you may discover there wasn’t such a problem after all.

“It is honorable for a man to resolve a dispute, but any fool can get himself into a quarrel” (Proverbs 20:3 HCSB).

Before you go barreling in to fix a problem regarding your marital intimacy, make sure you know what the problem really is. Get your spouse’s perspective on it. You may discover something you simply didn’t understand before, that will help you grow closer and stronger.

Have you had any silly misunderstandings? Or serious ones? How have you handled erroneous assumptions?

7 thoughts on “Are You Sure You’re Communicating?”