Quite a discussion erupted in the comments section of My Husband Is the Best Lover I’ve Ever Had, fueled by a wife whose husband mentioned a previous lover in a way that shook the wife’s confidence. 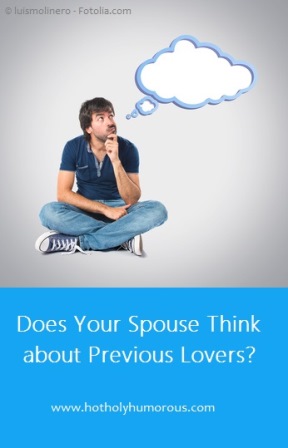 The discussion that ensued made me think about this question for myself: Do I ever think about my previous lovers? (The ones before I truly repented, got married, and began to enjoy the vast difference between that posed version of love and the real, honest-to-goodness thing?)

I wanted to immediately say no, but sometimes I have thought about them. Though probably not in the way some might think.

A few of those guys in my younger years took advantage of a situation and capitalized on my weaknesses for their own selfish pleasure. When I’ve thought of them, it’s sometimes followed by the image of me giving them a hard punch to the gut. Because that was uncool, man. Totally uncool.

And then there are a couple I took advantage of, for which I’ve given myself numerous internal punches to my own gut. When I’ve thought of those men, I ache over my actions and wish I could apologize.

The ones in the middle, where we both acted stupidly, selfishly, and shortsightedly? I feel pretty neutral about that — bad about my own actions and bad about theirs, which sort of cancels each other out.

But the truth is that, at this point in my marriage, my past lovers are like that dorky hairdo or fashion choice I wore back in the 80s. If I think of them at all, which is rare, it’s a distant memory that reminds me of my bad choices, but without much emotion attached.

It’s very much a that-was-then, this-is-now sense I have about the whole thing. As if that was a different person who engaged in those activities, a person wholly unlike this new creature in Christ with forgiveness, sacrificial grace, a fresh start, and God-blessed marital intimacy. I know that girl existed and that she’s a part of me, but she’s that part with the bad, teased-out perm and four-inch-high shoulder pads who lip-synced tunes with her Sony Walkman tape player and talked to her friends on a princess phone while curling the tangled cord around her fingers. Who was that girl?

And even if I think about one of those guys and my presence with them, I don’t really think about the sex. Except when I’m thinking about it for this blog or a book, in order to make comparisons that show how much better sex can be in a covenant marriage blessed our Heavenly Father. But that’s still a pretty clinical look at my past.

So honestly, I do think about my past lovers, but not as lovers . . . more like pieces of the disordered puzzle that was my past. And if I think about them as people, I wish them well — pray they found peace and forgiveness and love along their journey.

But does this mean your spouse doesn’t think about past lovers?

I can’t answer that.

Still, I have a gut feeling that many spouses feel about like I do — that was then, this is now. Even if they had a physically wonderful time with a previous lover, they don’t want to go back and have that. They chose the one they want to be with . . . and it’s you.

Sometimes, I have heard comments like how a husband wishes his wife was as sexually assertive as a former lover. Or a wife who fondly remembers the tenderness of a former lover. And that can feel like he or she wants the former lover. I doubt that’s true. Because while they may recall a quality from a previous lover — or maybe even an activity or location or event — what they really want is you with that quality, activity, location, etc.

It can be hard to tease that out — to feel like it’s an original experience when your spouse had such an experience without you. Which is one of the reasons why I believe God wants us to wait until marriage. But while having a sexual past presents challenges, they’re not insurmountable.

To me, the answer is creating your own memories that blow the old ones out of the water. Making the answer to the question, Do you think about old lovers?, a resounding, Why think of that when I could have THIS?!

Don’t worry that by engaging in similar behaviors or activities you’re recreating an old memory for him. That’s pretty unlikely, because you are your own person and the two of you have your own thing. Even if you had fun sex in the back seat with some guy back in 1988, it won’t be anything like that to have sex with your husband in the back seat of your vehicle today. Because you exist with a different and deeper connection, and the memory you make with your mate won’t be cringe-at-my-bad-perm stuff, but rather an addition to the treasure of memories that express and reinforce your love.

Does your spouse think about previous lovers? Maybe. But I suspect he thinks way more often about making love with you — the one he loves.