I’ve written about the myths of romance novels, aware they often convey wrong messages about love and sexuality. Plus, I feel bad for husbands who are trying, but the standard women seem to want, based on romance novels, is unrealistic and impossible. (We ladies know how unrealistic and impossible feels based on visual images, so you can understand my compassion. It sucks being compared to a fictitious fantasy.)

And then there’s the “cheese factor.” As in some romance novels — including some Christian fiction — are just cheesy. I don’t even know how to say this better. These are stories in which the characters don’t seem at all like ourselves or any real people we know. Sure, that could be fun for an escape, but I don’t read many of those novels. I know some of you don’t either.

Still, I believe in the importance of story. God’s Word is filled with stories teaching principles to live by, and Jesus taught many of his lessons in parables.

Bestselling author Toni Morrison said, “If there’s a book you really want to read, but it hasn’t been written yet, then you must write it.” So I decided to leap in with both feet and write the kind of stories I’d like to read about love, marriage, and sexual intimacy. 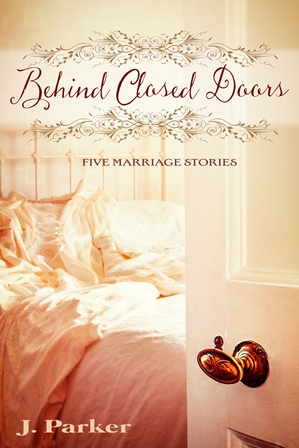 Behind Closed Doors is a collection of inspirational short stories addressing marriage and sexual intimacy. Following are previews of the five stories:

“The Rose Club.” Wendy and her two best friends are still mourning the death of Aunt Rose, as they sort through her treasured belongings and their childhood memories. When a discovery in the Aunt Rose’s bedroom sheds light on an unexpected side of their straight-laced “aunt,” the revelation unleashes confessions among lifelong friends.

“After the Baby.” Jack knows the exact number of days since he and his wife made love. With a newborn baby and an overwhelmed mommy in the house, how much longer must he wait? More importantly, how can they reconnect not simply as parents, but also as married lovers?

“Shotgun.” Tina and Josh are newlyweds, thanks to a surprise! teen pregnancy. But when a pregnancy complication knocks Tina onto her back for bed rest, it’s even more grown-up problems and less, or rather no, sex. Are the doctor’s orders for abstinence in their marriage a case of divine payback?

“The House the Densons Built.” Candace is a wife, homemaker, and mother of two, devoted to her family—until the arrival of a mysterious package shatters everything she believed about her marriage. How could her husband destroy their trust? Now they must confront the truth and decide if their marriage can be saved.

“Suite Nothings.” Nadine has dreamed of her wedding since childhood, determined to transform herself from tongue-tied klutz to fairytale princess for at least one day. After finding Mr. Right and setting the date, she realizes her preparations don’t include anything post-nuptials. Add another tab to the notebook! What can she do to make their wedding night unforgettable?

What can you expect with my romance book, Behind Closed Doors?

No sex on the page. Thus, the title Behind Closed Doors — since I believe what happens between a specific couple in their marriage bed is a private matter. So while many romance books include steamy sex scenes, they are not in my book.

References to sex. That said, there is definitely sexual desire, tension, and hints at intimacy between married couples. Nothing is written in an effort to titillate, but rather to be authentic about marriage and intimacy.

Real characters. Of course these are fictitious people, and I didn’t base them specifically on anyone I know. However, I tried to give them real skin, so to speak. I wanted these characters to feel authentic and experience real problems, real emotions, and real hope.

Specific scenarios. These are stories about these particular people, so don’t read too much into the specifics of their situation. For instance, the couple who marry young following a teen pregnancy does not mean I condone premarital sex, teen pregnancy, or marrying that young — but I know it happens and I used that specific setup to tell a story.

Universal themes. Although these stories and characters are specific, there are definitely takeaways. Themes of godly sexual intimacy, grace and generosity in marriage, and redemptive hope run through all of them. I believe stories can teach us something about life and ourselves, and I hope Behind Closed Doors achieves that goal.

I also hope a series of short stories revolving around biblical love, marriage, and intimacy will appeal to people who wouldn’t normally pick up a book about biblical sexuality. Maybe this is the kind of thing you could share with someone who won’t read a “self-help book,” but who does enjoy a good romance.

Behind Closed Doors is available through ebook, and it’s available with several vendors:

Many blessings to your marriage and what goes on behind your closed doors!