I’m back again for another installment of the Summer of Q&A with J. Here’s today’s question sent to me from a husband. He describes a conflict he had with his wife:

I have been giving a lot of thought to a recent disagreement on sexual intimacy. We had been through some tough things over the prior week, and one night I said how much I wanted to make love and feel her in my arms and forget the world for a while. And she got upset with me. Really upset.

At issue was the idea of using sexual intimacy as “comfort.” She was adamant that sex should not be used as “comfort” at all, ever, and felt that my request was inappropriate. 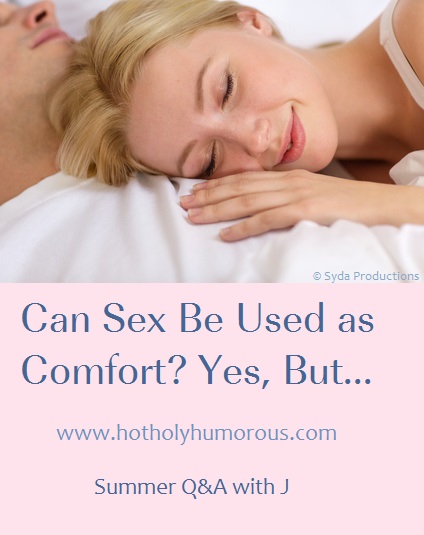 Let me point this reader and others to a post I wrote on 4 Ways Sex Can Comfort in Crisis or Grief. Specifically, consider these verses from the Bible:

“Then David comforted his wife Bathsheba, and he went to her and made love to her” (2 Samuel 12:24a).

“Isaac brought her into the tent of his mother Sarah, and he married Rebekah. So she became his wife, and he loved her; and Isaac was comforted after his mother’s death” (Genesis 24:67).

Thus, my answer is an unequivocal yes — sexual intimacy can absolutely be comforting in marriage. I’ve certainly experienced it myself.

HOWEVER, before you all bring out your thick Bibles to thump your spouses, the issue is more than who is right or wrong. I’m rather curious what the wife thinks sex is for — what are her “appropriate” reasons to engage in sex in marriage.

Some wives who don’t engage in sex frequently in marriage don’t feel listened to and valued, so here’s an opportunity to demonstrate you care about her thoughts and feelings. Ask what she thinks about sex: What purpose does it serve in marriage? Why did God include create it the way He did? Why is there an entire book about marriage and sex in the Bible (Song of Songs)?

Now don’t corner the poor girl and drill her like you’re the hard-nosed detective in the last cop show you saw. In The DNA of Relationships, marriage researcher and author Gary Smalley talks about how we draw close and open up to others when we feel “safe.” He defines as a safe environment as “no one has to worry about being shamed or rejected or punished or attacked for stating personal beliefs and feelings.” Then he notes, “In a place like that, heartfelt communication can bloom and grow.” Ask open-ended questions, invite conversation, and affirm your wife. Listen and rephrase what she says to make sure you understand where she’s coming from.

It’s perfectly fine for you to feel sex is comforting; it’s obviously in the Bible. What’s at question here seems to be her view of sex altogether. Who knows what beliefs about sex she’s learned or ingrained over the years? Some of us have loads of sexual baggage or received negative messages about sex.

When a big disagreement breaks out over something seemingly innocuous, that’s a red flag that you have hit a sore spot. Instead of digging in your heels further, as we are all tempted to do when we’re right, it could be a time to tread lightly and make extra effort to create that safe environment.

By the way, you won’t be able to do this on your own. That’s my heartfelt, been-there-tried-that opinion. I cannot achieve this kind of extravagant love in my own strength. Because yeah, when your spouse fires back at you, you’re wounded and the last thing you want to do is to put aside your pain and minister to your spouse.

Still, that’s what we’re called to do. Extra prayer is warranted. James 1:5 says: “If any of you lacks wisdom, you should ask God, who gives generously to all without finding fault, and it will be given to you.” You’ll need wise words, so ask for them. I also like finding verses that remind me of the kind of person I want to be in that circumstance and try to memorize them. For instance, I wish every married person had 1 Corinthians 13:4-8 memorized, so they could recall to mind what agape love really looks like. But if you’re struggling specifically with compassion or patience or gentleness, find those scriptures and arm yourself accordingly.

What do you think about sex as comfort? Have you faced similar conflicts in your marriage? What advice would you give?