My inbox currently has several messages with the same theme — a wife longing for her husband to desire sexual intimacy as much as she does. It seems to be increasingly common. Here’s a sample of what these wives say:

#1 – Please can you help me with learning how to cope with my husband who has been telling me “no” to sex? Can you tell me how I can understand why he acts uninterested and says he is tired? I know this is common now. Wives having the higher drive. . . . It seems the tables have slowly turned and now I am the one who has to seduce him and initiate sex. I just want to feel wanted and loved.

#2 – When we got married, I was a little taken back by his lack of interest in intimacy. . . . I avoid talking to him about our sex life because it only frustrates him and he says “I just don’t know what’s wrong!” I understand this is completely out of our control, so I try to dismiss it and not let him know it bothers me. It brings up feelings of rejection when I “make a move”  and he isn’t in the mood, it brings up insecurities and feelings of being unattractive.

#3 – I honestly don’t know if we’d ever have sex if i didn’t initiate it. Still to this day, I almost always have to initiate. And it drives me crazy! Thankfully, your blog has helped me learn how to communicate a little better how i feel and what i want. But i feel like we have the same conversation over and over again. I have told him that I need him to initiate more often, and he’ll do it like once but then if I don’t do it the next time I feel like it would be forever before we’d do it again. I try to wait and let him initiate but then he doesn’t and i am just left feeling disappointed.

#4 – I am by far the higher drive spouse, and it has caused some strain in our sex life. . . . usually whenever I initiate anything it just makes everything worse because I end up crying too much (I know, it’s bad) and he ends up so stressed about it that he wants it even less. So, can I just adapt to his timetable and suck it up or would it be a bad idea to suppress myself?

I’ll deal with each of these specific emails in the future, but I wanted to cover the subject as a whole of why doesn’t he want sex? 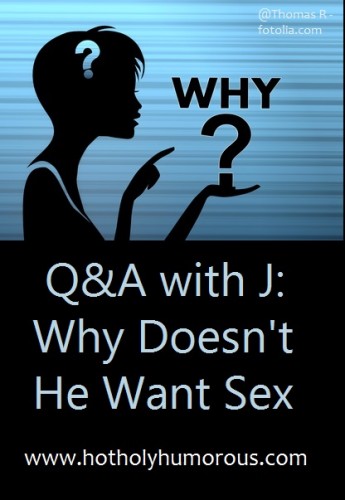 Many of us had personal experience to back up this notion: Guys scanning you inappropriately, making suggestive comments, hitting on you, even pressuring for sex.

Even most Christian resources about sex emphasize the husband’s biological need and emotional desire for sex.

So when a wife gets married and her husband’s just not that into sex, she can find herself feeling the sting of rejection, wondering what’s wrong with him, wondering what’s wrong with her, dealing day after day, night after night with disappointment. Why doesn’t he want sex? And, more importantly, why doesn’t he want sex with her?

Let’s lay out some options for why he isn’t interested. Because I agree this is happening in marriages more and more.

Physical issues. Like low-drive wives, low-drive husbands might be facing physical issues that prevent their bodies from responding as they should. Some of the common culprits include low testosterone, depression, diabetes, and obesity. This is why the first step I typically recommend is seeing a doctor and discussing libido. It’s not going to do much good to request a lot more sex when his body simply won’t cooperate.

What’s particularly difficult for the male side of low libido is the stigma many men attach to seeing a doctor and/or admitting their low sex drive. But if you can get him to recognize the problem could be physical and easily resolved, he might get on board.

Stress. Since I started writing about higher-drive wives, I’ve decided this is actually a big part of the problem for low-drive husbands. It’s not that we have so much more stress now in our world. We just don’t have the same outlets men have historically had. Whether we gals understand it or not, men are built to engage the world in a physical, vigorous, adventurous way. Sure, these are stereotypes, and there are exceptions, but there’s some deep-down truth to it. Just ask a bunch of moms who’ve raised boys, and we’ll attest that even young boys tend toward more roughness and physicality.

Now put all those guys in schools or homes or workplaces with little opportunity to move around in big, hearty ways. How are men supposed to release their pent-up stress?  You’d think they might engage in the physicality of sex. But there’s effort and gentleness required in marital sex that many of today’s men don’t have the capacity to give. The stress simply wears them down. Frustration and fatigue set in. They might even turn to virtual ways of relieving stress, like shooter video games.

The lack of physical activity also affects testosterone levels (see physical issues above). Many societies simply don’t require husbands to exert the physical activity that would release his stress and fuel his masculinity. What’s the answer? Regular exercise is a start. Looking for ways to support his adventurousness might help. Little by little, increase the opportunities for him to flex his physicality.

Wives are freer to want sex. Here’s the last thing I want to point out: Some of the shift in drive is attributable to women feeling freer in our society to express their sexuality. In many eras and cultures, the standard message was not only that men wanted sex more, but that women weren’t supposed to want it all that much — certainly not good women. Thus, many women suppressed their sex drive, consciously or unconsciously. When she didn’t want it so much, he obviously wanted it more.

And maybe some of those expectations are not realistic. For instance, these wives often expect a sexual happily-ever-after based on romance stories they’ve read or seen. Real-world sex in marriage is far better in the long run, but it does take some effort. Flex your sex muscle, sure, but recognize that there are two people involved in this relationship, and that means it won’t always be perfectly synchronized.

Like I said, I’ll deal with these wives’ specific questions later, but I wanted to clear up some reasons why I believe more and more marriages have higher-drive wives and lower-drive husbands.