Once again, I’m appalled by how sexual sin has creeped — or perhaps stomped — into our politics. You can’t even let your kid watch a political debate or an ad without the strong possibility that you’ll need to explain some pretty vulgar stuff.

And it’s not just the presidential election. In the last year, a former House Speaker pled guilty to paying bribes to make charges of sexual misconduct (when he was a teacher and coach) go away. A Louisiana Senator lost his bid for governor after news broke that he’d solicited prostitutes. And a former New York congressman can’t seem to stop sexting his body parts across the Twitterverse.

Now let’s not fool ourselves. We’ve always had sexual sinners in politics. That part is most definitely not new. But the speed and spread of information in our digital age keeps these stories at the forefront.

And in front of our kids. 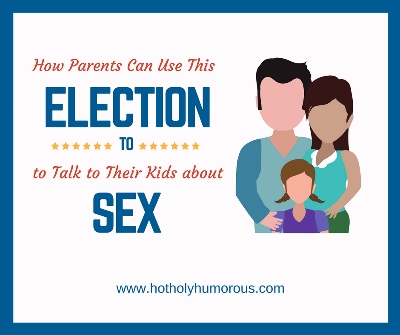 Even if your child isn’t seeing these ads or walking through the room as debates are played or viewing news stories on websites, other kids are talking about it at their school or online. These stories are also headlines on the magazine covers displayed at the grocery store checkout.

Rather than be furious at the world for its inability to keep things G-rated for the sake of my children, I decided to use these current events to strike up a conversation with my teenager. It ended up being a wonderful discussion in which I asked his opinion, expressed my thoughts, and clarified more about godly values.

Admittedly, my kid is a teenager. This conversation would have gone very differently with a six- or an eleven-year-old. But I wanted to give you some quick tips on how to use this election — or any other news story about sexual misconduct — to speak to your kids about God’s superior design for sex.

Ask your kids what they know.

If your child is very young, you can likely skip this one because you have a good handle on what they’ve been exposed to. But even by elementary and beyond, kids are hearing what’s going on in the news. And what they’ve heard could be erroneous, incomplete, and/or explained in ways that don’t comport with your values.

You don’t need to address the entire story, giving them every in and out, so ask what they’ve heard. Correct errors in the facts, fill in gaps if needed, and talk about the biblical perspective of what’s happening. Remember as you speak that our God is a god of righteousness and justice as well as love and mercy.

Ask your kids what they think.

Around junior high, kids are starting to have their own take on what’s going on in the world. You might be surprised how well they can express their own thoughts about what’s happening. Ask their opinion on the latest sex scandal, and then really listen. Be a safe place for your child to express their forming opinions. You’ll have a lot more opportunity to help them mature in their faith and beliefs if you welcome their questions and doubts.

You might also find they’ve absorbed a lot of the messages you’ve been trying to send about good, respectful, and godly behavior. Then you can tweak around the edges and discuss the subject more fully, helping them to understand where they need to think further and align their views more with God’s Word.

Talk at their level.

Your 7-year-old does not need a crash course in sexting. But if you think your 13-year-old doesn’t know what that is, think again. A general rule of thumb is to take whatever age you think a child should know about something, then subtract 2-3 years and — in our society — that’s when they know it. Talk to them at whatever level they are, equipping them with a little more information than they have while avoiding a detailed rant about the sex scandal at hand that your kid doesn’t need.

Use age-appropriate language for body parts. (You don’t want your kid to be the one to teach everyone else in elementary what p**sy means. Please.) And consider what their needs are at their particular age. Do they need reassurance that not all mommies or daddies behave like the ones in the news? Do they need specific knowledge to understand what’s happening in the world around them? Do they need better tools to handle their own personal challenges in light of the news story?

Bring God into the conversation.

Your child needs to know that God is active in our current world and has something to say about modern-day events. Let your kid know what God thinks about the situation and even reference a scripture or two that supports that viewpoint. Be clear that “as for me and my household, we will serve the Lord” (Joshua 24:15).

That said, don’t browbeat your child with verse after verse after verse. We can become so fervent in getting our point across that we turn the discussion into a Bible lesson and shut down conversation. Look at how Jesus did it: Choosing an apt scripture here and there to demonstrate the point He wanted to make.

Discuss what lessons we can draw.

It’s easy to talk about everyone else’s terrible sexual behavior, but let’s consider how some news story applies to our own lives. For young kids, a sexual scandal story might remind us to warn our kids about what’s appropriate and inappropriate touch and how to handle someone speaking in a way that makes them uncomfortable. For middle-age kids, we need to start talking about proper boundaries and showing respect to others.

For teenagers, they’re almost adults and actively dealing with their own sexuality. Talk about what’s okay and what’s not okay, why exclusive sex in marriage is a far superior design, how to train their minds toward godly views of sexuality, how to actively show respect to others of the opposite sex. In my conversation with my son, I talked specifically our responsibility to help others not to sin but how our sin is also our own. That is, even if some girl dropped her clothes and rubbed up against him, it’s still his sin if he acts on that instead of fleeing from sexual immorality. (Just ask Joseph, Genesis 39.)

And God can use you to teach your kids about what it means to belong to Him. Even through scandalous headlines in this election and beyond.

Note: I welcome your comments, but please not specifically about this divisive election. If you even use the names Clinton or Trump, you’ve likely moved away from my point. I moderate all comments and will approve those on topic.