I’m not sure how many low-drive husbands read my blog, but I know quite a few high-drive wives read it. Sometimes they comment or email me about the issues in their marriage, and I personally lament how few resources there are for couples in this scenario.

Today it’s on my heart to write not to the high-drive wife (though I have done that and will continue to do so), but to the low-drive husband because that’s also a tough position to be in. 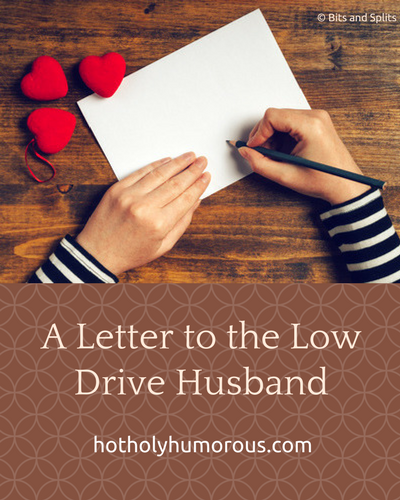 You live in a frustrating world. All around you, the message is that men want sex constantly, that their appetite for sex — particularly with the woman they love — is nearly unquenchable. It’s a message you grew up with, so much that it seems like masculinity itself is linked with a high sex drive.

And while you’ve got the equipment and it works, you’re just not that needy for sexual encounters with your wife. Sure, you like them. But on any given day, you’re not busting out of your pants zipper at the thought of sex, or even the thought of your sexy wife — as gorgeous as she is. And plenty of nights you long for sleep as much or more than you do sex.

Confessing this to other guys, however, might get your Man Card revoked. So you haven’t gone around asking how it’s going with others or seeking resources for your “issue.”

As someone who has studied and written on married sexuality for almost seven years and hears from higher drives wives almost every week, let me see if I can explain a few things.

Totally man. Completely, thoroughly M-A-N. A more passive sex drive doesn’t make you any less male. If you’ve got the package and you know how to use it, rest assured you’re good to go. God knows what He made, and he made you XY — man. In fact, this is a big factor in why your wife wants you so much. Because she’s very into you being different from her and how you fit together as male-female so perfectly.

Please don’t listen to the messages that equate masculinity with unbridled sex drive. They aren’t from God. Rather, principles of biblical manhood within marriage are controlling sinful appetites, providing for one’s family, and servant leadership.

Pay attention to these words from King David: “When the time drew near for David to die, he gave a charge to Solomon his son. ‘I am about to go the way of all the earth,’ he said. ‘So be strong, act like a man,…’” His next words were not, “And show off your sexual prowess, thus getting lots of high-fives in the men’s locker room.” Rather, David finished his instructions this way: “and observe what the Lord your God requires: Walk in obedience to him, and keep his decrees and commands, his laws and regulations, as written in the Law of Moses.”

Also, consider what the Apostle Paul said: ” As for you, Titus, promote the kind of living that reflects wholesome teaching. Teach the older men to exercise self-control, to be worthy of respect, and to live wisely. They must have sound faith and be filled with love and patience” (Titus 2:1-2,  NLT). These are pictures of biblical manhood.

You’re not the only one out there whose sex drive isn’t in high gear 24/7. You’re in the company of 15-30% of other husbands. Let me break that down for you. In terms of the U.S. population, that’s about 22 to 45 million men. If we’re talking world population, it’s 0.57 to 1.13 billion men. So while some may make you feel like a stranger in a strange land, you’re not.

While it seems risky, if not dangerous, to admit to another guy that you have a lagging sex drive, there are resources for you. Some have written about low-drive husbands, and you can also take many married sex articles, books, resources and just reverse things in your mind (if they say the wife is lower drive, but you are in your marriage, then pay more attention to the advice on that side).

You need to take action.

Dude, your wife is hurting. I hear from higher-drive wives all the time who question their desirability, their marriage relationship, and even their husband’s love, because they feel like the weird one whose husband doesn’t want them sexually. Even more importantly, God intended for you and your wife to have regular sexual intimacy in marriage.

You have a biblical obligation to engage in the marriage bed: “The husband should fulfill his wife’s sexual needs, and the wife should fulfill her husband’s needs” (1 Corinthians 3:5). Now that doesn’t mean that you should schlep to the bedroom with duty, duty, duty playing through your head. The second part of that verse, and so many other places in the Bible, show us sexual intimacy in marriage is for both spouses and should be pleasurable and connection-building.

Rather, this is a call to action. If you’re not currently fulfilling your wife’s sexual needs, you need to work on why and what to do about it. How can you create a situation in which you both desire sexual intimacy? I don’t know what your issues are, but I’ll throw out a few possibilities:

And if your wife shared this blog post with you, maybe it’s time to take a walk together hand-in-hand or sit across the kitchen table and have an honest conversation about sex in your marriage.

Because she wants you — all of you. And I suspect, once you work out a few things, you want her a great deal too.

Note on “not attracted to your wife”: High-drive wives will likely read that as physical appearance, but men tell me it’s almost always things like feeling disrespected or ignored that makes her less appealing to him.  You, dear woman, are beautiful, but relationship issues can tense men to the point that they don’t feel as drawn to their wives. I’ll cover that more next week, but I really didn’t want to leave the wrong impression!