If you’d told me that I would be blogging for seven years, put up 800 posts, most of which have been about sex, and have thousands of people regularly reading them, I’d have said, “Excuse me, I need a vacation from just thinking about all that.”

Actually, I still want that vacation.

But rather than a vacation, I’ve been on a journey. I started in December 2010 with a Blogger site, writing one post a week and agonizing every time my finger hovered over the Publish button. I was sending my thoughts about sex into the world! A subject I was passionate about, but that not everyone was comfortable discussing.

Still, I believed that:

Seven years later, here’s my blog by the numbers: 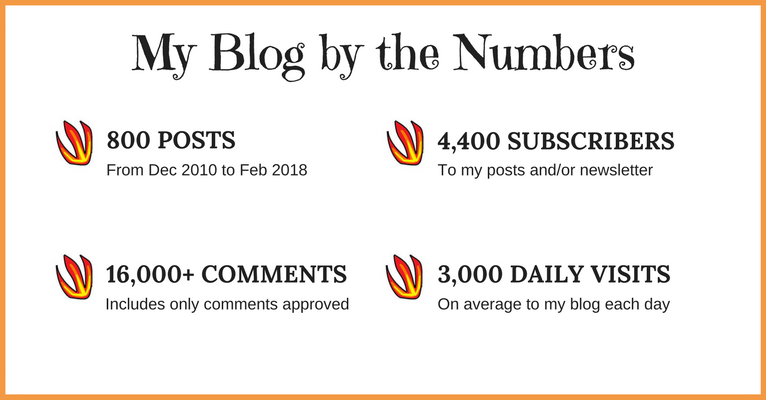 Pardon that pause. I had to be awakened from my faint with smelling salts. Because good gravy! those are some big numbers.

But the number I don’t have—the number I’m curious about, but don’t need to know—is how many marriages God has strengthened through Hot, Holy & Humorous.

He deserves all the credit. While I believe wholeheartedly in what I do, and think I do it well, even that comes from God.

For when one says, “I follow Paul,” and another, “I follow Apollos,” are you not mere human beings? What, after all, is Apollos? And what is Paul? Only servants, through whom you came to believe—as the Lord has assigned to each his task. I planted the seed, Apollos watered it, but God has been making it grow. So neither the one who plants nor the one who waters is anything, but only God, who makes things grow.

I’m just glad I got to be part of the gardening. (Because in real life, I suck at gardening.)

And you have made my journey so much nicer! I started this venture alone — well, me and God — but along the way, I’ve encountered so many who have trusted me with their stories, invited me to share what I’ve learned, encouraged me with generous words and deeds, and thanked me for whatever part I’ve played in their journey to a stronger, more intimate marriage.

As we approach Valentine’s Day, I simply want to say thank you to my brothers and sisters in Christ who have kept me and this blog going. You’re all sweethearts!

Now go bless your spouse with your love! And a little bow-chicka-wow-wow, while you’re at it. 😉

And DO NOT FORGET, this sale ends soon. Don’t miss it!