To those who get sexually rejected by your husband: Hearing no hurts.

I get it. Some of you hear a no now and again, and some of you hear it a lot. But either way, you experience a strong desire to be physically and emotionally connected to your beloved, you approach your spouse with high hopes, and you get brushed off — your longings left unfulfilled.

But something often happens next. You ask yourself why. 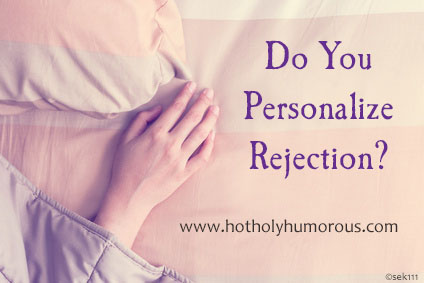 Why does your hubby not respond to your sexual advances? Why do other husbands seem to want their wives but your husband doesn’t? Why isn’t your beauty the kind that stops traffic, or at least makes your husband look up from his TV show? Why does he say he’s too tired or too busy or too fill-in-the-blank? Is that really the reason, or could it be something else?

Given how quickly our female minds jump from one thing to another, it could be mere moments before you settle in on what you’re sure must be the truth: He just doesn’t want you.

Not only this time, but generally speaking. You believe there’s something wrong with you or your relationship or your beauty or your worthiness or … And the list goes on. We personalize the rejection.

But when we personalize that rejection, we don’t see those factors. A wife ends up feeling like her husband isn’t saying no merely to sex, but to her. And not because of some issue within him, but because he’s rejecting her personally. When that’s probably not what’s going on.

Why do we do this? Maybe for one of the following reasons.

Women are relationship problem-solvers. Men are often seen as the problem-solvers — the ones who, when you explain a problem, skip right over sympathy or commiseration to “how can this be fixed?” That stereotype holds some truth, especially when the problem is well-defined.

However, when it comes to relationships, I think women are more likely to be problem-solvers. When we see something amiss, we jump in to assuage hurt feelings, correct misunderstandings, resolve differences, and mend the cracks. We don’t like cracks in our relational bonds, and we try to putty over those as fast as possible.

Being rejected sexually feels like a relationship crack. And if we can’t fix our husband, the immediate place we go to is fixing ourselves. Clearly — a wife thinks — I must be the problem, and if only I can fix that… Fixing ourselves is within our sphere of control.

So we try to do better, look better, be better. And, while I believe in becoming your best self, this can veer off into becoming someone who isn’t you. That is, you minimize your value, your desires, your beauty — trying to become someone you think your husband wants.

When most of the time, his lack of drive isn’t about that. And he already has who he wants — you.

Women are constant comparers. If I had a nickel for every time a woman in my midst compared herself to another woman’s homemaking, mothering, or appearance, I wouldn’t be writing this blog right now — I’d be sipping a paper-umbrella-decorated drink on the beach of my private island. Wives are constantly measuring how we’re doing by checking in on how other women are doing, and then drawing (often erroneous) conclusions.

So what happens when you hear how often other wives are getting “hit on” by their husbands? When the messages you’re getting are that “all husbands want is sex,” but that’s not your experience? When it feels like all other husbands are raring to go at the snap of a bra opening, and that’s not happening in your marital bedroom?

You look at those wives … you look at yourself … and you decide there’s something wrong with you. What else could be happening? Well, a lot of things actually. But it’s easy to ignore all the other reasons for a difference in sex drives and personalize that rejection. You can end up thinking if all those husbands are chasing after their wives, then your husband must simply be unhappy with the wife he chose.

But that’s rarely the issue. More often, it’s something going on inside him. And playing the comparison game isn’t helping your situation.

Men are bad communicators. Okay, not all of you guys. I promise I’m not trying to be mean here. But from the female perspective, you guys can be hard to figure out because you often don’t tell us what’s going on inside you!

Now I live a house of three men. Typical answers to “how are you feeling?” include hungry, tired, stressed. To me, those aren’t feelings. Feelings are discouraged, grieving, depressed, sullen, heartsick — and those all just describe sad. If you listen long enough, I can also give you full description of where I feel this sadness in my body, why I think it’s there, and metaphors or similes to describe what I’m feeling (“It’s like I’m tethered to the ground”). Look, I know some of that is because I’m a writer, but some of it is because I’m a woman. We express our thoughts and feelings!

Sure, plenty of marriages contradict this pattern, but it’s not uncommon for a guy to keep his feelings close to his chest, or even be unable to define or describe what’s happening inside him. So when he doesn’t have a high sex drive, what’s he supposed to say? He likely says as little as possible, because most guys don’t like to talk about their bad emotions.

So wives fill in the gaps, imagining what he’s really thinking. Even figuring the only reason he isn’t saying something is because it’s bad and about us. So yeah, it’s not just poor communication of some husbands, but also the overactive imagination of some wives.

But what if the explanation “I’m tired” or “I need to finish this job for work” really is the reason? What if you’ve complicated the whole thing because, as a woman, you wouldn’t have communicated it that way?

So if the rejection isn’t personal, how can you stop believing that a no to sex indicates some flaw in you?

Ask yourself some questions and really think about your answers. It’s easy to react with your default settings, but consider an alternative perspective.

This is one instance when “it’s not you, it’s me” is usually true. But in marriage, me becomes we. So instead of spending your time personalizing the rejection, try to identify the real issue and tackle it together. Many couples with mismatched sex drives have figured it out, but only by being one another’s support.