Last week, I asked wives to answer a simple question: Why don’t you comment more often? The answers I received were enlightening. And a little surprising.

The Results of My Survey

Among the reasons were lack of time, agreeing with what was said and having nothing to add, and a few issues with some male commenters. But what caught me off guard was how many women said they did not comment because they didn’t know who would want to hear what they had to say.

While I don’t believe gender differences completely explain this viewpoint, research has shown women are less likely to exhibit boldness than men.

What the Research Shows

According to a commonly cited internal report from Hewlett Packard from the 2010s: “Women…applied for a promotion only when they believed they met 100 percent of the qualifications listed for the job. Men were happy to apply when they thought they could meet 60 percent of the job requirements.” Further studies showed that women didn’t lack confidence in themselves as much as confidence in the system being willing to hire them if they didn’t meet every qualification.

Men have also been shown to be bolder in dating apps, initiating more contacts than women, not by double but four times the number of messages. Certainly some of this is cultural, in that men tend to initiate relationships more often, but it still indicates a bias toward men just going for what they want.

And then there’s the study showing that at meetings where both men and women attend, women speak 25% less than men. Moreover: “Participants who held the floor for a greater percentage of the group’s deliberation were more likely to be seen as influential by the other members of the group. Thus the active use of voice translates into greater perceived influence, as we expected.” Even more discouraging, perhaps, was the researchers’ conclusion that women fare better in homogeneous groups, meaning all women.

So are we ladies really supposed to exist in a world where we only express ourselves fully when in the company of women?

What Are We Missing?

Look, I’m a big fan of gathering into all-female groups at times. I co-host a podcast with that framework, Sex Chat for Christian Wives. I also have a higher-drive wife group on Facebook, comprised exclusively of women whose libidos are higher than their husbands. And when I speak, I primarily teach women’s groups.

However, I’m really bothered that some of us gals don’t feel like our opinions, our beliefs, our desires are worth expressing, even in mixed company.

And I’ve seen this play out with wives in the bedroom, who have sadly absorbed the message that their sexuality and/or sexual pleasure doesn’t matter as much as their husbands’. When nothing could be further from the truth.

Yet, we have promoted this belief in our culture, both Christian and secular, by talking much more often about the male sex drive, by telling wives their role is to meet their husband’s sexual needs, by presuming that male sex arousal is the sexual cycle for all people (see our “Women’s Sexual Response” episode), and by using scriptures about the mutuality of sexual intimacy to argue that a wife can never say no.

Instead, I want to say unequivocally right now to all of you wives out there: You matter.

The Importance of Women and Their Words

What you feel, what you think, what you believe … is important. What you want, what you need, what you dream about … is valuable. Who you are … is precious.

And in a society that discounted a woman’s testimony as unreliable in court, our Lord Jesus appeared first to women, making them the initial eyewitnesses to His resurrection (Mark 16:1-8). What a message about how He values the words of women!

What This Means about Your Bedroom

I often feel in my ministry as if I’m balancing two disparate concepts I want wives to understand about their sexual intimacy:

Some might say it’s a weaving selflessness and selfishness in the marriage bed. But I think of it as other-focus and self-awareness—an approach that values both of you as equally worthwhile partners in intimacy.

Do you discount your sexual desires? Do you tend to believe his pleasure or climax matters more than your own? Do you hesitate to speak up for yourself and what you want? Do you lack boldness in your bedroom?

Maybe it’s time, or well past time, to value your opinions, express yourself, and create more mutual conversation and sexual intimacy in your marriage.

And hey, comment more here! I’d love to hear what you gals think.

Sources: Harvard Business Review – Why Women Don’t Apply for Jobs Unless They’re 100% Qualified; Forbes – Act Now To Shrink The Confidence Gap; Forbes – The Confidence Gap In Men And Women: Why It Matters And How To Overcome It; The Daily Free Press – Men’s online dating habits more bold than women’s, study finds; Enterpreneur – Head Into Your Next Male-Dominated Meeting Ready to Contribute by Following These Tips; American Political Science Review – Gender Inequality in Deliberative Participation

“Just tell me what you want!” he says, exasperated by all her hinting and expectations and … well, manipulation. Because that must be what it is, right? Why else would she play games? 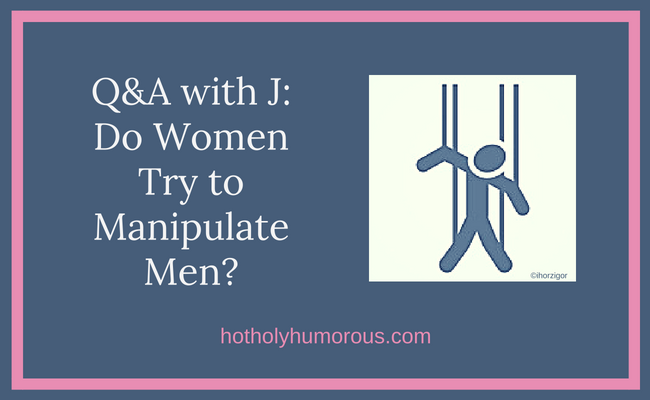 This question, more or less, came up in a series of posts written by Paul Byerly of The Generous Husband and The XY Code. You can go read those posts here:

I took issue with the word “game” as a description of what’s happening for most women. In addition to commenting, I had a great online conversation with Paul, at the end of which I volunteered to write a post about why women often aren’t as direct in their communication.

Generally speaking, she’s not trying to manipulate him or make it difficult. Most women who haven’t learned a lot about men’s brains and communication style don’t understand they’re being unclear to him. We honestly believe you should be able to see what we’re saying!

Especially because … sometimes he does.

Case in point: My husband, whom I fondly call Spock because he is super-logical and not instinctively romantic, does not pick up on hints. When he tries, he often guesses wrong. However, we stepped into a local furniture/knick-knack store one time, and I commented on how much I loved a particular painting. I thought nothing of it, because I was simply admiring a product at the store.

Lo and behold, at my next birthday my husband presented me with the painting! It now hangs next to my desk: 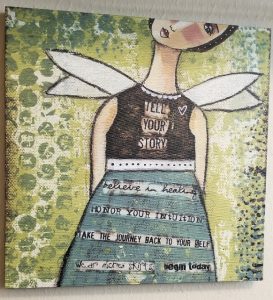 Creative, fun, and quirky…like me!

I don’t know why that one time he paid attention to my interest and followed through with the gift. But had I not already known the way his mind generally works, I might have concluded that his willingness to meet my understated desires was selective. Some women might figure: Because he did it this one time, why can’t he do it all the time?

But it’s not fair to take a one-off and try to force that into a pattern. That would be like thinking that one time I made a perfect meal means I could deliver chef-worthy food every single night. (Not.)

It’s easy to misread one another if we don’t make an effort to understand the inherent differences in our communication styles, which come from our backgrounds, our personalities, and our gender. Not all of the stereotypes will apply to your spouse, but it’s worth asking whether such things are true.

And give one another the benefit of the doubt when your spouse says you misunderstood their intentions. Yes, if you said X, it would mean Y. But for your spouse, saying X might mean Z. Because we think and communicate differently.

Again, I believe God made it this way because, to have a good marriage, we’re then forced to let go of our selfishness, aim to understand our spouse, and stretch ourselves in loving them. The way Christ modeled.

But let me back to the original question: Do women try to manipulate men? Sure, some do. But most of the time, if a wife’s dropping hints and thinks her husband should pick up on them, she’s not trying to manipulate him. She’s lived her life learning how to pick up on subtlety, and her brain is even hardwired better for this task, so it’s difficult to understand why he can’t. Especially when, as I pointed out, now and then something does stick for him.

Meanwhile, ladies, take those moments as a treat, but try to be more direct with the men in your life. I hear from a lot of husbands who feel frustrated because they want to give their wives what they want, but their wives won’t tell them and the guys cannot figure out the hints. Because men are hardwired that way and learned that communication style.

Let’s not accuse each other of intentions that aren’t there, but rather work through our differences to reach unity.

“Make every effort to keep the unity of the Spirit through the bond of peace” (Ephesians 4:3).

Now please go read my guest post at The Generous Husband: Why She Communicates the Way She Does (and It May Not Be What You Think)

Also check out a great podcast episode I just listened to: The Art of Manliness – The Male Brain

And a great one for wives to read: You’re Not Allowed to Complain About Not Getting What You Didn’t Ask For (It’s more balanced than the title conveys.)

Plus one more: Is It Manipulation? Motive Matters from The Forgiven Wife

Would love for you to support our podcast team attending a ministry conference!