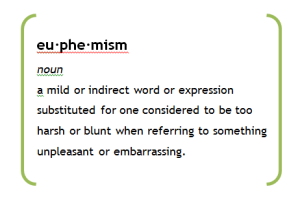 A euphemism is an expression that says one thing when we all know it means another *wink-wink*. Like saying your uncle “kicked the bucket” or “bought the farm” or “passed away,” rather than died.

There are moments when you might refer to your own sexual encounters, or perhaps those of others, by not stating outright what’s going on, but using a euphemism instead. For married couples, this can be out of playfulness or to send a message that others (like the kids) won’t catch.

Today, I’m sharing a few unusual euphemisms for sex, gleaned from the Internet, family and friends, and Facebook followers. They fall into categories.

Food. I shouldn’t be surprised, since I’ve used analogies on this blog of eating at restaurants, starving vs. gluttony, and indulging in brownies. But here are a few sex euphemisms referring to food.

Play with the cookies. I have no idea which part is the “cookies,” but JP said that she tells her husband “time to play with the cookies!” Indeed, I have a feeling most hubbies would rather have sex than chocolate chips . . . or better yet, both.

Chicken noodle soup time. Thanks to VMB for this one. And I couldn’t help myself: It seemed like the Campbell’s Soup slogans would go along great with this euphemism, so I looked them up:

Bread and Butter. This expression hails from the 1800s and indicates the closeness that both butter spread on bread and one spouse, um, “spread” on top of the other would have. “I’d like some bread and butter tonight, honey!”

Politics. I was rather bemused by two euphemisms for sex that showed up in the Facebook comments. Who knew that politics could be so inspirational for the bedroom?

Presidential Quarters. NCR says that she tells her husband she needs to meet him in the presidential quarters. Wow, that’s gotta make a guy feel good. Not only does his wife want to have sex with him, she’s promoted him to “leader of the free world.”

Congress Is in Session. For those of us who live in the United States, that phrase isn’t always a good thing. But as a euphemism for sex, it’s wonderful! The word “congress” originally meant a coming together of people or a meeting. And marital sex is definitely a meeting you want in session.

Household chores. Some parents tell the kids they’re doing boring, grown-up household chores when they’re really doing exciting, grown-up sex stuff. Since kids don’t want to be around you when you’re “cleaning closets” or whatever, this could be a great way to secure enough time alone to get the deed done.

Moving furniture. RKY use this one. I have to wonder how they explain it to others when the furniture is still in the same place later. Although “moving furniture” would explain the creak of the bed and the grunts and groans heard through the bedroom door.

Paying the bills. Now there’s a way to clear the room of everyone but you and the hubby! According to HWC, this works brilliantly, since their 9 year old then says, “That stresses parents out, so we better leave them alone!” Yes, kid, you should.

Animals. Since sex is a nature thing (“birds do it, bees do it, even educated fleas do it”*), some use references to animals. Sure, we’re not animals, but they mate, we mate…it makes sense.

Bury the bone. Have you heard this one? No, you’re not a dog, but the imagery is clear. You know exactly what the “bone” is and where to “bury” it.

Animal noises. One FB commenter (CW) said that her husband just makes animal mating noises. The kids think he’s being funny, but his wife knows what he’s proposing. I’m curious which animals and how he knows their mating sounds.

The Unexplainable. Some euphemisms don’t fit a specific category. They’re just fun, make sense to the couple, and get the job done.

Spelunking. Thanks to a friend who provided this one. She and her husband will sometimes say, “Want to go spelunking?” Why spelunking? She explained that spelunking involves exploring secret caverns and crevices, kinda like sex. I’d like to be there the day her children realize why their parents are always talking about going spelunking . . . but never actually go.

Jumpstart. Facebook commenter ABA’s husband is a mechanic. So their code phrase is “Do you need a jumpstart?” I like that they tailored the euphemism to their specific family situation.

Chitty Chitty Bang Bang. Yes, it’s a Disney movie. However, when I told my husband I was going to do a post about euphemisms for “you know” and then gestured a little to convey my meaning, his response was, “You mean the Chitty Chitty Bang Bang?” That was a new one for us. After laughing a bit, I responded, “Oh, now I understand why they sing, ‘Chitty Chitty Bang Bang, we love you!'” Yep, it’s veritable feast of cheesy humor in my marriage.

Okay, your turn. What euphemisms do you use for sex? How do you let your spouse know that you’re willing, interested, and good-to-go?

*”Birds do it, bees do it, even educated fleas do it” are lyrics from “Let’s Do It, Let’s Fall in Love” by Cole Porter.