I’ve written honestly about my premarital promiscuous past. It took a long time for me to get over the lingering feelings that I was damaged by decisions I’d made and that I didn’t really deserve fabulous things in my marriage bed because I’d blown it with God’s gift of sex before my I Dos.

Whether you knew what you were doing was wrong, or you later figured out how much better it would have been to wait until marriage, many of us wives end up with guilt stuck to us like lint to black pants — we can’t quite get rid of it all.

Maybe you’re actually like me — a wife who had a satisfying sex life with her husband, but who secretly worried that she was still a “bad girl” at heart, despite the commitment on her lips and the ring on her finger. Who wondered if God would ever really forgive her for ignoring His clear commands. Who expected consequences to come careening around the corner any minute to destroy her newfound marital happiness.

I’m so over that now.

I had a way-too-petty perspective of my forgiving God. In truth, He’d already forgiven me; I just hadn’t fully accepted His grace. It was like He kept shoving this new gift at me, and I was turning it down. Over and over.

Believe me, I did all kinds of self-evaluation — with the background of a counseling degree — and tried to figure out ways to deal with my clinging guilt. None of that worked.

What did work was diving into God’s Word and realizing how foolish I’d been. When you read the life of Paul, you recognize that his past is ever-present as a memory of who he was, but it does not define who he becomes in Christ Jesus. And he knows this when he writes this passage that was finally The One that snapped me out of my poor thinking:

Or do you not know that wrongdoers will not inherit the kingdom of God? Do not be deceived: Neither the sexually immoral nor idolaters nor adulterers nor men who have sex with men nor thieves nor the greedy nor drunkards nor slanderers nor swindlers will inherit the kingdom of God. And that is what some of you were. But you were washed, you were sanctified, you were justified in the name of the Lord Jesus Christ and by the Spirit of our God.

I underlined where I showed up in the verse, so you couldn’t miss it. Did you see the former me? Yep, “sexually immoral.” I was not going to inherit the kingdom of God. But I also highlighted the most important word to me in that whole section: were.

Just like S.E. Hinton’s novel title: That was then, this is now.

Because it’s a done deal, y’all. You used to be that person. But you’re following God’s plan now — married to your lover. If you’ve confessed and asked for forgiveness for your premarital sins, God will forgive you (See 1 John 1:9). And then you can say: “I was washed, I was sanctified, I was justified” — past tense. Signed, sealed, delivered. Done.

You can let those past sins go. God’s got it covered.

This is the principle I want us to understand this week as we consider a memory verse for your marriage. But honestly, that passage I quoted is really long. I’ve read it many times, but I still don’t have it fully memorized.

So I chose another verse that is shorter and right to the point. In fact, it communicates just how much God wants to do for you — how gracious and loving He is. That He isn’t holding your sinful past over your head, but rather encouraging you to seek His best for your marriage now.

Psalm 103:12: “As far as the east is from the west, so far has he removed our transgressions from us.” 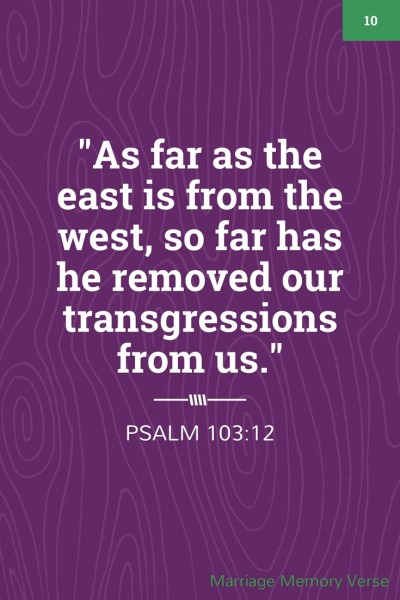 Transgressions is pretty much a big word for “sins.” Transgression comes from the root words trans, meaning across, and gress, meaning to walk or go. It basically means that you’re crossing over the line — that line in this case being God’s command to remain pure before marriage.

You crossed the line before. But you’re on the right side now — purity in marriage. Because marital purity isn’t going without sex; it’s seeking godly intimacy in your marriage bed.

That’s what God wants you to have now — everything He always intended you to have, in the right context.

Let him shower you with His love and remove your sins from you — as far as the east is from the west.

I’ll be honest: I do not understand the adult coloring craze. I hated coloring inside the lines as a child, and I have no intention of repeating that frustrating experience as an adult.

However, I have friends who truly love it. And I know that for visual people, doodling is an excellent way to retain information. So why not find a coloring page online with your memory verse or create your own?

I opened up my Microsoft Word program and created the coloring page below. Not amazing, but if you’re a visual person and enjoy coloring, this might help you remember the scripture. Click the pdf link below, print, and color away!

5 thoughts on “Has Your Previous Promiscuity Impacted Your Marriage?”