On Saturdays, we’ve been looking into how the Beatitudes impact our marriage and our marriage beds. Once again, from Jesus’ Sermon on the Mount:

We’ve been through Poor in Spirit, Those Who Mourn, The Meek, Hunger and Thirst for Righteousness, The Merciful, Pure in Heart, Peacemakers. And now we’ve reached the final one: persecuted because of righteousness. 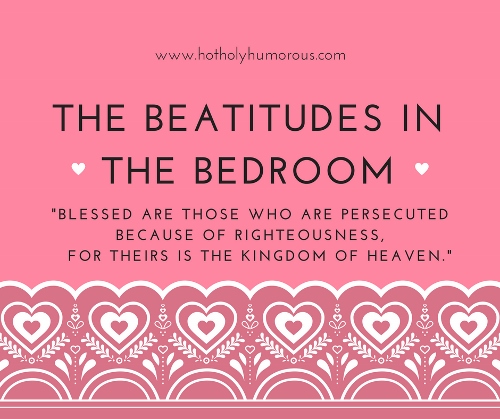 I feel for you, but that’s not what this verse is talking about. Let’s break it down.

In the New Testament Greek, the phrase “persecuted because of righteousness” comes from three words: Dioko Heneka Dikaiosune.

Dioko. The New Testament Greek word Dioko is one of three words used to mean persecute. This particular word carries with it the notion of pursuing someone in a hostile manner. It’s not just mistreatment, but persistent pursuit to harass or oppress.

Where I live, in a well-churched suburb of Houston, I don’t think we have a good sense of what it’s like to be really persecuted. We certainly haven’t ever had to make a choice between confessing our faith and having our freedom or our lives. For that, I’m grateful — and I pray for those Christians in our world who live in places where they are outright persecuted.

But most Christians know what it’s like to be mocked by someone for their faith. That’s a low form of persecution, but it is harassment or even hostility. And yes, we can be mocked for our position on sexual intimacy in marriage. But, before I go into more detail, let’s get to the next Greek word.

Heneka. This is the word translated as because of, but it’s also translated in other verses simply as “for” (see Matthew 10:39, 19:5). So why am I focusing on an itty-bitty preposition?

Because we might read, “Blessed are those who are persecuted,” and immediately start listing all the ways we feel put upon and harassed and mistreated. But God isn’t saying you’re blessed just because you’re having a bad day, a bad week, or even a bad decade. There are other verses that give you comfort and answers for that.

This verse says you’re blessed if it’s because of something. The reason why you feel like things are going badly matters. Some of us are experiencing bad stuff in our marriage because, truth be told, we aren’t fully seeking the next part of this verse.

Our marriage beds can be places of righteousness. Not simply in those black-and-white ways of having sex in marriage but not outside of marriage (which is definitely important), but with each choice we make in how we treat our spouse, what attitude toward sex we adopt, whether we pursue God’s plan for deeper love and intimacy through physical closeness, and how we express Christ-like love as we make love.

So bringing this all together…

What could it possibly mean to be persecuted because of righteousness — when it comes to the marriage bed?

I don’t think this is about feeling mistreated by your own spouse. Rather, I know spouses and couples who have tried to seek righteousness in this area of their marriage … and things got harder. It’s tough to admit that, because I’m always saying stuff like, “Work on your marriage bed! Things can get better!” Which is true, but that doesn’t mean that Satan, and other people, will be cheering you on as you seek righteousness.

See if you recognize any of these forms of harassment or hostility:

You could probably add to list, and none of these is insurmountable. I certainly don’t know anyone whose stance on godly sex in marriage has resulted in a threat that they’ll be burned at the stake or hung in the public square.

But I have seen couples who have made real progress in the bedroom, and instead of having others celebrate their steps toward righteousness — life seems to attack them from various directions. I can tell you that every marriage blogger I’ve talked to about this says they’ve felt spiritually attacked in their marriage at one point or another.

So maybe there is some persecution because of righteousness in the marriage bed. But whatever. “…theirs is the kingdom of heaven.” I think I’ll take that trade.

Pursuing righteousness in your marriage bed has its own rewards between you and your spouse, but ultimately we do the right thing for the sake of God and His kingdom. We are His children, and our lives — all the way down to our sexuality — should reflect the Father.

Have you felt any persecution, or harassment, because of your stance or pursuit of godly sexuality? Has your marriage felt attacked in some way since you began working toward better sexual intimacy?

9 thoughts on “The Beatitudes in the Bedroom: Persecuted”