Our question for today comes from a wife who is currently separated from her husband, fighting for her marriage, and trying to deal with her restless sex drive. Here it is:

Our sex life has been amazing from day one. I have a very high libido and I just enjoy sex and trying new things, etc. However, we are currently separated due to him falling into an international affair. I am fighting hard for my marriage and I’m praying the Lord will grab his heart and turn him from his sin… 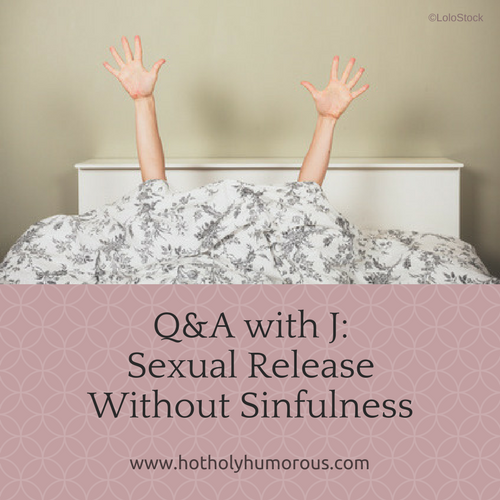 First off, I’m praying for your marriage too, and I invite my readers to do the same. Obviously, the best answer is for this marriage to be not only restored but brought to a place of thriving.

Yet whatever happens, you have to deal with this high libido that was awakened in marriage and now has no place to be satisfied. I feel for you. Your sex drive doesn’t just go away when your spouse is gone; it can be a hungry little beast when not properly fed.

You essentially have three ways to deal with a restless sex drive.

Long physical separation from your spouse could be one of those times when it’s beneficial to “take the edge off” so that you can remain focused on your husband and your intimacy with him and not be tempted by another’s man attention, get cranky with your husband because it’s been way too long, etc. But imagining a scenario in your mind that doesn’t involve your husband takes sexual energy away from him; it’s inherently detrimental to your relationship.

If you’re imagining anything other than your hubby in your mind, you’re in sinful territory. And that’s what erotica encourages you to do. Jesus said, “But I say, anyone who even looks at a woman with lust has already committed adultery with her in his heart” (Matthew 5:28, NLT). Of course that also applies to a woman looking, or imagining, a man with lust.

Look at your motives, your heart and your mind, and what will best keep your sexual energy on your marriage. Prayerfully ask those questions and listen for God’s answers.

You don’t have to use sexual energy sexually. That pent-up feeling can be channeled toward other activities. For instance, physical exercise can help diffuse that tension. It’s another way to be active, experience body chemical highs, and end up with that level of fatigue you sometimes feel at the end of sex.

I’m sure you’re also missing that physical touch that comes with sexual connection. You can refocus your desire for sexual affection to other forms of affection and other relationships. Spend more time with family. Volunteer in your church’s nursery. Head to a convalescent home and hold hands with an old woman, who might also have some wise life advice to share while you’re there.

Check out these and other ideas on what to do with your sexual energy when you’re not attached in this post.

You’re probably thinking, I can’t! It’s impossible to ignore. But hear me out. In psychology, there’s a principle called extinction. In behavioral therapy, we know that linking a stimulus and a consequence causes people to expect the latter when the former shows up. The classic experiment is Pavlov’s dogs who heard a bell before being fed and thereafter drooled for food whenever they heard the bell ring. But if you de-couple that stimulus and consequence (bell → food), eventually the conditioned response (drooling) goes away. That’s extinction.

Right now, your hungry little beast — aka, your sex drive — wants to be fed. But it doesn’t literally need to be fed. You don’t have to have sex for your heart to keep beating. So it’s possible to use a bit of extinction in dealing with your drive.

I don’t believe your libido will completely go away, because our sexuality is an integral, God-given part of our humanity. But if you constantly shove juicy morsels at that beast, it will keep coming and coming, demanding to be fed. If you ignore it, eventually your drive will diminish. Enough to be more manageable.

Lest you think I’m being completely unrealistic, my husband and I did not have sex for about four months when expecting our second child. I was right in that high-libido part of my pregnancy when my doctor announced that health risks precluded intercourse. I did a lot of ignoring my drive, and so did my husband. Over time, it got less demanding. So I believe it can be done.

(By the way, for those who are in a marriage where you should be having sex and one of you has been practicing extinction, this might help to explain why it’s hard to get going again. But you should, for the sake of your marriage.)

Which of the three options should you choose? Each of them — releasing your sex drive, channeling it, ignoring it — could be beneficial depending on the motives, circumstances, and goals. But ask serious questions about what would honor God and your marriage when deciding what to do.

Once again, I’m praying that your marriage will be saved.

9 thoughts on “Q&A with J: Sexual Release Without Sinfulness”