When I first read the following question, I thought surely I’d answered it before. But while I could find a post about sexting your spouse, I couldn’t find one specifically about having “Skype sex.” So I’m tackling it today.

I guess what I am asking is, should there be shame here? I’m so torn. 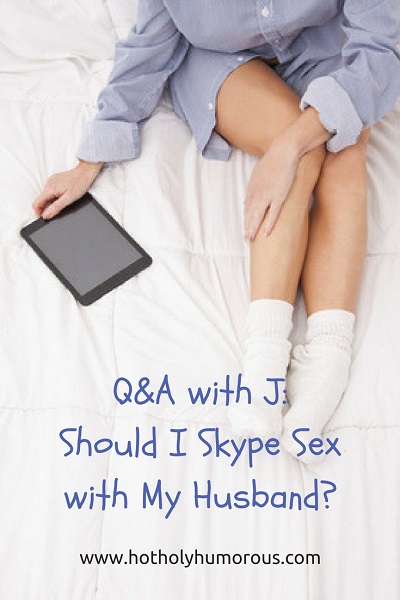 Q&A with J: “Is It Okay for Him to Please Himself While Thinking of Me?”

It is indeed quicker and easier for most people to reach orgasm using their own hands, because we have a feedback loop for what feels good and can immediately adjust. If you get overly used to that form of sexual satisfaction, it can be difficult to be patient and adaptable in the presence of your beloved to make things happen. Because it takes more communication and connection to have your husband bring you to climax, or vice versa. However, it’s ultimately more fulfilling.

To my mind, here are the choices:

I don’t believe any of these choices is expressly wrong. Rather, they each could cause you to grow closer or to grow further apart, depending on who you each are and your relationship. And that’s the measure.

You state yourself: “However, I also know that it is time spent with my husband, keeping our marriage strong. It doesnt involve anyone else and were doing it together.”

It sounds like you know the answer then. Engaging in this activity, as awkward as it might seem at first or to some, seems to be strengthening your marriage.

So why do you feel shame?

One final thought: If you don’t want to have Skype sex with your husband, you don’t have to. While everything I’ve said (with the exception of the technology question, which someone else will answer) show that I don’t consider this a problem, it still isn’t something a spouse should demand in a long-distance season of marriage.

It’s legitimately okay to say you feel so extremely uncomfortable that you need to find another way to deal with your sexual desires. Because it isn’t straight-out sex, so I don’t think you’re depriving your husband if you don’t engage (see 1 Corinthians 7:3-5). It’s the physical separation itself that’s causing the absence of sex.

But given your situation — six months apart! — you might want to give long-distance sexting or Skype sex a shot. It might help you both hang on until you can be back in one another’s arms and in your literal marriage bed.

22 thoughts on “Q&A with J: Should I Skype Sex with My Husband?”