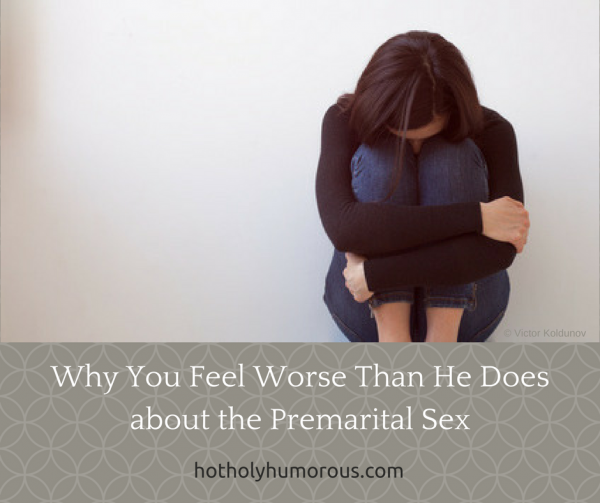 Did you have sex before marriage? Either with your husband or someone else? Or maybe several someone elses?

Welcome to the majority. Statistics show that 97% of Americans have sex before marriage. In highly religious groups, that number goes down to 80%, which is quite a difference. However, that’s still 4 out of 5 devoted Christians who didn’t wait until the ring was on the finger, the I Dos were spoken, the deal was sealed.

Waiting for sex until marriage is God’s design and desire, but the reality is that many of us didn’t achieve that goal. And if messing up was the end of our hope, not a single person could make it to Heaven. Rather, there is forgiveness, redemption, and clean slates through the saving work of Jesus on the cross.

But a reader recently emailed me saying that he hadn’t gotten the sense that my premarital promiscuous past came with any real consequences for me or my marriage: “I came to the conclusion that your premarital ‘adventures’ had not affected you at all.”

Wow. If I have left that impression, let me correct it right now. I have not talked about all the specific consequences of my past, poor choices — my sin — because some are quite personal and painful. But having sex before marriage remains my greatest regret.

I do not carry the guilt of my sin, because through the blood of Jesus, I have been washed, sanctified, and justified through Christ and the Spirit (1 Corinthians 9:11). Still, if I could do anything in my life over again, that would be it.

Many wives feel similarly about their past promiscuity. They hate the choices they made, they ache over the consequences, they wish they could go back and do it differently.

Some of that emotional baggage follows them into marriage, like dragging an invisible suitcase filled with heavy heartache. But when these wives try to talk to their husbands about the issue, their feelings are sometimes batted away with “That was so long ago” or “I don’t care about those guys; you’re with me now” or “Why are you dwelling on the past?” The husband doesn’t really understand why the issue still impacts her view of her sexuality and her openness in the marriage bed.

So why do you feel worse than he does about premarital sex? Why is easier for him to move on from his past? Why doesn’t he understand what you’re going through?

Looking specifically at teen sex, one study cited that 72% of girls who engaged in sexual intercourse wished they’d waited. That’s nearly three-fourths of young ladies who regret the sexual choice they made. But what is the percentage for teen boys? 55%. While still a majority of guys, that’s a substantial drop.

What about adults? The Norwegian University of Science and Technology and the University of Texas at Austin together interviewed 853 Norwegians and 466 Americans. They wanted to know if religiosity influenced sexual regret after casual sex, with Norwegians representing far less attachment to religion than Americans professed. They didn’t find much difference on the religiosity scales (although I could argue with what they defined as “religiosity”), but they discovered an interesting outcome that women experienced far more sexual regret than men.

Then there’s the National Marriage Project, which surveyed a thousand single Americans and then studied them for five years. Among the 418 who got married during that time, 23% who only had sex with their spouse prior to marriage reported higher quality marriages than those who had additional sexual partners in their past. Even more revealing was that the more sexual partners a woman had before marriage, the less happy she reported her marriage to be. But the researchers didn’t find the same thing about men.

So are our husbands all too happy to collect sexual partners before marriage with no regrets at all? No, I don’t think that’s true.

Plenty of husbands also say they wish they’d waited for their wives. But they don’t always carry residual regret the same way.

I suspect that’s more about how men target their focus and compartmentalize events. Many husbands don’t feel their prior mistakes or sins have a bearing on how they feel about their wives. Simply put, they’re often better at putting the past behind them with a that was then, this is now attitude.

That’s a great thing when you consider that husbands are not comparing their wives to other women from their past. They’ve flipped that page and moved on.

Now I’m not at all trying to diminish the weight of sin. Because that is what our poor choices were. But I am saying that there’s a gender gap in sexual regret likely based on gender differences in our brains.

But that doesn’t solve this disconnect — that she continues to carry baggage from her promiscuous past and he doesn’t fully understand. What can a wife (and husband) do?

The first step in clearing your state is being honest about your failings. That may sound like I’m encouraging you to dwell in the past, but nothing could be further from the truth. Admitting our sin is simply a first step. As 1 John 1:9 says, “If we confess our sins, he is faithful and just and will forgive us our sins and purify us from all unrighteousness.” That’s a big if there at the beginning, one we’d be well-advised to heed.

I was recently asked if there was an aha moment for me in my marriage — that moment when I let go of my past baggage (as awful as it was) and embraced a different future for my marriage. For me, it was finally, fully understanding this passage:

Or do you not know that wrongdoers will not inherit the kingdom of God? Do not be deceived: Neither the sexually immoral nor idolaters nor adulterers nor men who have sex with men, nor thieves nor the greedy nor drunkards nor slanderers nor swindlers will inherit the kingdom of God. And that is what some of you were. But you were washed, you were sanctified, you were justified in the name of the Lord Jesus Christ and by the Spirit of our God (1 Corinthians 6:9-11).

Ah, the beauty of that past tense. The sexually immoral is what I was, but I also was washed, sanctified, and justified in Christ Jesus. Believe it, cling to it, embrace His forgiveness.

Be honest about what messages and concerns you’ve brought into your marriage based on your past. Much of what we think about ourselves, our husbands, and our sexuality can be tainted by our prior sexual experiences. What errors in thinking and behavior have you adopted based on your previous sexual choices and how you were treated by those other men?

To replace your erroneous thinking with God’s truth about sexual intimacy in marriage, you need to know where you’ve bought into lies. Here’s a common lie: That you don’t deserve full pleasure and intimacy in the marriage bed because you screwed up before. Not true. You are in a married wife now, pursuing God’s plan for sexual intimacy, and He longs to bless you and your husband.

Your husband doesn’t have to fully understand, and he may have a different way of looking at past promiscuity. But explain your own thoughts and feelings as best you can. You might also want to use a line I once used with my husband when he told me, for the millionth time, not to worry about something: “I literally have no idea what that looks like.” I went on to explain that while he can shove something in a mental box and tuck it away, I cannot. It’s just not how the female brain typically works. If your husband can begin to understand, you can enlist his help to push through your sexual regret and enjoy the full blessings of a healthy marriage bed on the other side.

All of my other tips are for the wives, but this one is for you men reading. Research has shown that women struggle more with this, so please recognize it’s not some flaw in your wife that she can’t quickly and easily let go of the past. If you want to really help your wife, don’t belittle her feelings, dismiss her struggle, or shut down conversation. Rather, reassure and comfort her, help her embrace a new perspective, and make sexual intimacy a beautiful experience for her too. Just be her Barnabas; that is, her encourager as she journeys toward a healthy and holy view of sex in your marriage.

For a while after I embraced God’s design of sex, I still struggled. I ruminated about my sinful past, carried personal labels like slut in my mind, and felt a fair dose of heartache from time to time. But over time, my husband and I logged so many positive, one-flesh sexual experiences that those outweighed everything that came before. The scales tipped, and “sex” in my mind became equated with this holier and deeper version of sexual intimacy. In some ways, “just do it” is good advice. And by it, I don’t mean sex itself, but sex God’s way.

Have you struggled with your premarital promiscuous past? How have you embraced God’s way instead? 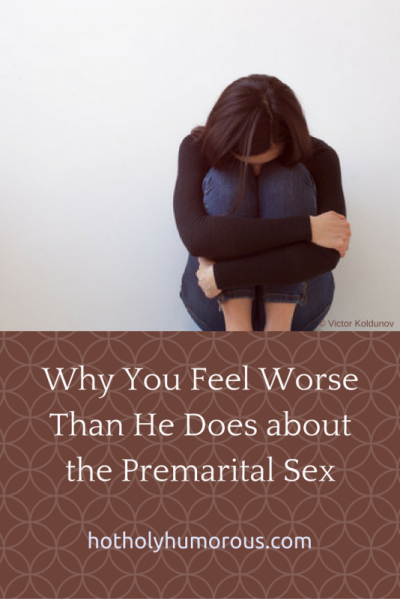 WaitingTillMarriage.com – 4 Cool Statistics About Abstinence in the USA; Statistic Brain – Abstinence Statistics; PubMed.gov – Trends in premarital sex in the United States, 1954-2003; Verily – Sex Regret Isn’t about Religious Guilt as Much as Biological Instincts, New Research Shows; Sutter Health Palo Alto Medical Foundation – Teen Attitudes Toward Sex; The National Marriage Project – Before I Do; Verily – Regret Is Not the Same as Slut-Shaming