Have you heard the saying that, when it comes to sexual intimacy, “Men are microwaves, women are crockpots”?

The message is that men heat up quickly, while women take longer to warm up and reach readiness. Now some have argued this is a poor analogy since it assumes the woman will heat up, which isn’t always true for low-drive wives. 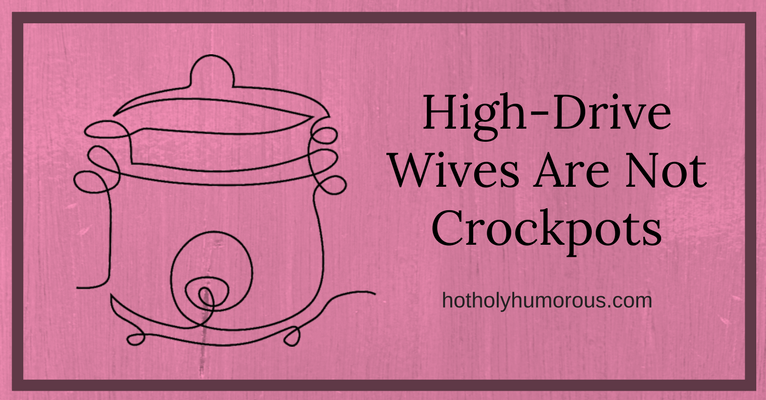 In fact, I discovered this quite by accident. I recently established a closed Facebook community for higher-drive wives, and as I was going through requests (yes, I’m behind), a number of them were also part of a Facebook group called the Instant Pot®­ Community.

If you haven’t heard of an Instant Pot, first of all, where have you been? Secondly, it’s much like a slow cooker in shape and plug-in, but it performs several tasks—among them, warming, sautéing, slow cooking,  and pressure cooking. That’s it—the perfect metaphor for the high-drive wife!

She has higher sexual interest than her husband, but she still has sexual responses typical to a woman. It’s not that every single second she’s zapping with sexual energy. Rather, she goes through all of these.

For most higher-drive spouses, the sexual interest is rarely gone, but rather it hums in the background. Click To Tweet

It’s warm, but not eager. Ready, but not antsy. There, but not prominent.

Even if she started out warm, sometimes an HD wife still needs to be “slow-cooked” in the bedroom. That is, having higher sexual interest does not mean her body necessarily cooperates with where her mind and desire are.

Many wives have more reactive than proactive sexual responses. That is, when the sexual cycle was originally proposed, it considered the male experience:

But for many women, things can be less straightforward. For instance, this isn’t an unusual experience for wives:

As you can imagine, it can take longer for the wife to get there than the husband. Even if she started out with more sexual desire than he had. It’s often a good idea for husbands to slow down the arousal phase, even if she’s generally excited about making love.

An HD wife knows what being “steamy” feels like. Sexual awareness hangs over her like late-summer humidity by a Louisiana swamp. Sights and sounds and smells of her husband can trigger desire and even arousal.

These moments might coincide with hormonal peaks in her cycle, but that’s not necessary. The warmth she typically feels has risen to full-on heat, and she can be ready to initiate or respond in the same 5-7 minutes it takes to steam broccoli.

Sautéing takes about the same amount of time as steaming, but it places the food closer to the heat and adds a little oil. While I’m sure I could draw some analogy from the inclusion of oil (oh, the possibilities…), I’m going to bypass that one and stick with the heat.

But this is when HD wives are very likely to initiate. They feel heated up, eager to make love, and want to sizzle in the marriage bed. Eagerness and excitement underlies sexual interest, and arousal is right behind or even taking the lead.

Likewise, HD wives can reach the pressure cooker point when it’s been a while between sexual encounters. The steam and heat have built up, and they long for a release. This isn’t to say that lovemaking is merely physical for them, but oftentimes the longer a higher-drive spouse goes without sexual contact, the more they experience a physical urge. There’s an intensity and urgency to their sexual desire.

Now I recognize you all can tear apart my analogies if you feel so inclined, but the main points I want to make in this post are:

Does that make HD wives complicated? I suppose. But then aren’t all women a bit complicated? If you didn’t want complication, hubbies reading this, you should have gotten a dog. Mind you, it won’t care for you when you’re sick, you’ll have to pick up its poop, and you definitely aren’t getting sexual intimacy, but Fido will be easier to figure out.

Frankly, most husbands think the puzzle of their wives is worth it. Especially when you both enjoy all kinds of intimacy in marriage.

For more on HD wives, check out the following posts:

For those wives who are lower drive, please don’t feel that HD wives have it easy. Every marriage has a lower drive and a higher drive spouse, and the couple has to work through that. And if you’re really struggling, please check out Sheila Gregoire’s Boost Your Libido course and/or Bonny Burns’s Unlock Your Libido book.

53 thoughts on “High-Drive Wives Are Not Crockpots”