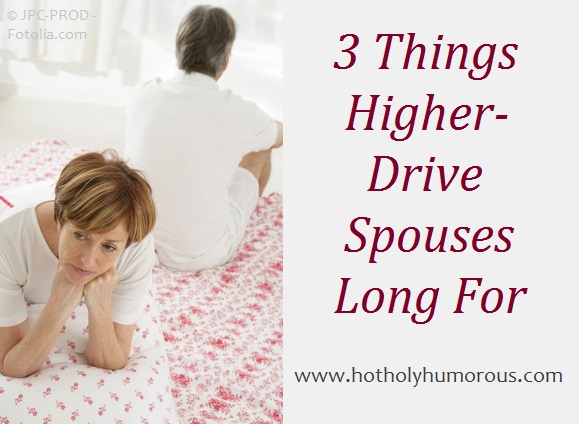 1. Recognition that their sex drive isn’t bad. When you want physical intimacy a lot, and your spouse doesn’t, you can get the feeling your sex drive is a bad thing. Sometimes, it’s just a feeling you have that you want sex more than you want to want it. And other times, it’s expressed by your mate with statements like, “Stop being so selfish,” or questions like, “Why do you want sex all the time?” — usually accompanied by a haughty tone and a sneer.

Rather than embracing your libido, you start to feel less-than, in your eyes and/or your spouse’s. And that’s a horrible thing to feel about something that should be considered a gift from God.

What does the higher-drive spouse want? Recognition from their spouse that this sex drive isn’t bad. It’s not inherently selfish or evil or disgusting. A strong desire to make love with your covenant mate is a beautiful thing.

2. Understanding that sex isn’t just about sex. Sure, I know some people who are completely into the physical side of sex and don’t understand the deeper implications. But I hear from many, many more higher-drive spouses who want sex not simply for physical satisfaction, but because it makes them feel connected, loved, and intimate with their spouse. If it was only about physical release — being candid here — the higher-drive spouse could take care of things on their own.

Instead, that husband or wife seeking more sex doesn’t see their mate as a mere tool for achieving a goal. No way! For them, it isn’t just about sex — it’s about so much more. Even if words fail them and they seem to default to talking about the sex itself, if you could dig deep and tease out what’s really happening, sex is powerfully meaningful.

They want the physical pleasure, but they want the whole package — physical, recreational, emotional, spiritual. And more than anything, the higher drive spouse wants to feel the love of their mate.

3. Commitment to try. The mismatch in drives can be frustrating, but what really hurts is a mate unwilling to even try. It pains the heart of someone longing to show love in the bedroom to be rebuffed and refused constantly, with no hope in sight of anything ever changing. What would help a lot is a simple commitment to try — try to talk about it, try to see another point of view, try to get in the mood, try to change things up a little now and then, try enjoying yourself in bed.

Most higher-drive spouses don’t expect an immediate turnaround in their less-willing mate. While it would be great to come home one day and find their lover with bedroom eyes, little on their body, and rip-raring to go, that’s not their expectation or intent. Rather, they long for the lower-drive spouse to love them enough to try to understand and meet their needs — just as you should each be doing in other areas of marriage. The higher-drive spouse isn’t looking for a quick change, but rather a long-term commitment to invest in sexual intimacy.