Welcome (back) to Q&A with J. Let’s look at today’s reader question:

My husband gets erections when he sees other women. Is this normal? It’s messing with my self esteem in ways I can’t describe. 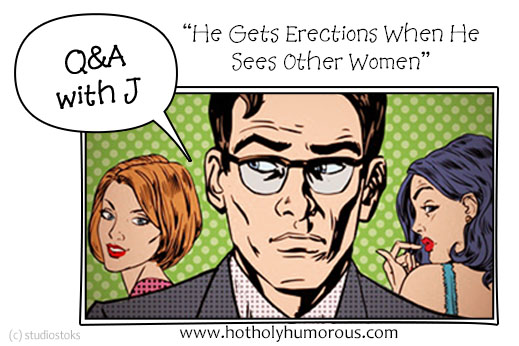 When I first got this question, my instinctive reaction was yeah, that’s normal — certainly for younger guys. But as I thought about it more and more, I wondered how I reached that conclusion. It’s not as if I gazed at previous boyfriends’ or my husband’s groin area when we crossed the paths of other women to check for reactions. Most of the time, whatever my guy was wearing would mask anything but a very strong erection, and I wouldn’t know without being physically close enough to detect what was happening.

Maybe it’s because I’m the mother of two boys, and as they grew up, I realized how quickly and somewhat randomly a boy can get an erection. It can certainly be a sexual thing, but it can also happen for other reasons. Frankly, that whole area is a bit of a mystery in how active it all is.

I don’t have that equipment, so I can’t say for certain. Which is why I turned to a wonderful marriage blogging colleague, Paul Byerly of The Generous Husband (for husbands), The XY Code (for wives), and The Marriage Bed (for couples). I wanted a trusted guy’s perspective on what’s happening with this reader’s husband.

Is it normal? It is certainly common, especially for young men. Starting at puberty, we find ourselves with erections all the time. Often there is some sexual thought or sight, possibly very minor, to blame, but sometimes it just seems to be random and without any cause. These erections are swift to happen and can be very, very slow to go away. Thinking about them makes it worse, and not thinking about them is rather difficult.

With age, a man develops some degree of control over this. Basically, we learn to suppress “inappropriate erections.” Suppress can mean not getting them, or it can mean getting only partly erect — we feel it, but it don’t show. Some men develop this ability very quickly, some take far longer. I’ve had emails from men in their mid 20s who still struggle with this. There are actually web pages devoted to telling men how to dress to hide undesired erections.

[By the way], women do the same thing, but their bodies don’t advertise it. In fact, it can be subtle enough for a woman to ignore, which is pretty common given how uptight many women are about sex. If you fitted this woman with a device that beeped when she got mildly aroused I suspect she would learn things about herself she could not handle.

Good point, Paul. For many women, certain times of the month, thoughts, or sights can cause arousal and lubrication. Thank goodness none of that is on display, or people might draw erroneous conclusions about our sexuality. A woman getting “wet” around some guy doesn’t mean she wants him; it could mean she’s hitting the fertile part of her cycle or a stray thought about her husband entered her mind.

Of course, if a wife knows her man is regularly getting a “hard-on” in the presence of other women, I can imagine how that could mess with self-esteem. It could be interpreted that he was interested, or at least intrigued, by other women. I have great compassion for this wife’s emotional response. Like all of us wives, she wants to be the focus of her beloved’s eyes, mind, and heart.

But here are a few things to consider:

Look at the totality of how he treats you and your marriage. You cannot conclude how he feels about you and other women based on one aspect. If he gets erections now and then around other women, but he doesn’t pursue their attention, keeps his commitment to you, and prioritizes your marriage bed, it’s very likely not what you’re thinking. And he may also be bothered that this is happening.

We cannot read each other’s minds. Yes, we look for clues about what someone’s thinking, but sometimes we’re just wrong. We think his tone is angry when he’s really just stressed, or we think her falling asleep means she’s refusing sex when it’s just been an exhausting day. We tend to personalize things in a relationship: If we’re interacting with someone, and they display certain signals, we think it’s about us — when it might not be at all. The only way to know what your husband’s thinking is for him to tell you what he’ s thinking.

If you need to, have a conversation. Personally, I’m pretty bold about stuff like this, because if I were facing this scenario, I’d simply ask my husband: “Hey, I noticed had a reaction around that woman, and I felt hurt when that happened. Can you tell me what’s going on?” Then he’d answer: “It’s cold in here” or “I don’t know. It was weird. But it wasn’t about her and when it happened, I immediately thought about you and how much I want to . . .” And then he’d whispered suggestions, and I’d forget about it. At least, knowing me and my husband, I expect that’s how this conversation would go. But whatever that would look like in your case, talk about it. And be willing to ask for what you need, whether it’s reassurance or to see him turn away from looking at a woman when that happens. We can calmly ask our husbands for what would help us feel better about our marriage and intimacy.

Work on your own self-confidence. My husband’s opinion of me certainly plays into how I feel about myself and my appearance, but it’s not as important as how I independently view myself and how much I trust God’s view of me. We can more easily approach situations like these from a place of confidence and calm than if we’re doubting ourselves all the time or expecting our husbands to be our self-esteem heroes. Cultivate those feelings that you are a woman of beauty and value.

I hope something here helps! And thanks again to Paul for generously offering his man-wisdom.

35 thoughts on “Q&A with J: “He Gets Erections When He Sees Other Women””