Sex is in the news. Or at least accusations of sexual misbehavior.

And I’ve been struck by the difference in how women and men respond to these news stories. Now, let me be clear, I believe wholeheartedly that many men are upset by highly improper statements about women made by a particular candidate and the rumors (true or not) that have followed. I salute these men for taking the situation seriously and understanding the importance of respect.

But overall, guys, I’m not sure y’all totally get it. Like really, really get it.

Even the men I’ve personally spoken to, who are disturbed by what’s been said and charged, seem to brush this off a bit more quickly. Or chalk it up to “a few jerks” or even “boys will be boys.”

Sometimes, it’s just hard for men and women to describe fully what it’s like to be their gender. So I wanted to take this opportunity to tell all of you husbands: Your wife has likely been sexually harassed. Repeatedly. 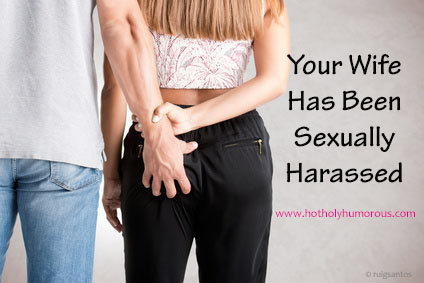 She may have been molested or raped as well. But if your wife is the average female, she’s had to deal with vile statements about her body, unwanted sexual touch, and even groping that left her stunned, angry, and/or ashamed.

And I think this is why women are being so vocal on social media and in conversation circles : Because, in the wake of allegations (yet again, true or not), women are sharing personal stories and realizing, “Hey, this is a universal problem.”

From my own life, at least one of the following is true of every woman I’ve talked to about this. (And this is from men they were not dating.)

The second one listed — someone speaking about genitalia in crass terms — happened to me in high school … in front of my dad. If my father hadn’t been turned away and missed what the guy said, I’m pretty sure that guy would have gotten a pounding. And deserved it. But did I say anything? No. Rather, I was disarmed by those comments, felt humiliated, and just wanted to forget about it. Given that it’s over 30 years later, I obviously haven’t forgotten. That moment left an impression.

I have several reasons for sharing this with you men:

Stories of women sexually mistreated affect wives in a different way. Yes, I know some women are dismissing what is rumored to have happened, but most women have had a visceral response. Maybe not to the news stories, but to personal stories now shared by friends or family. Why? Because we understand. Because we’ve experienced it.

Like a Survival Sisterhood, we now recognize it wasn’t our fault that some guy groped us in the nightclub, or the church fellowship room, when we were 19 years old. We didn’t ask for it. And, quite frankly, some of us are sick of this happening and want a better experience for ourselves, our daughters, and our granddaughters.

Sexual harassment impacts how women view men. To me, the most disheartening part has been women who suggest this is just how men are — that we shouldn’t expect anything more than being viewed as a sex object by men. You and I know that’s not true! The vast majority of men I’ve encountered never spoke in such crass terms or put their hands where they didn’t belong.

I believe those men who are true jerks, the sexual harassers of the world, don’t mistreat a few women; they mistreat a lot of women. Which makes it seem like it’s men across the board, but a single jerk can verbally and physically attack tens or hundreds. It’s a way of life for them, and their impact is felt across many women.

But this has left an impression on how ladies view men. Because if our interactions have been negative in this way, some wives begin to wonder: Does my husband secretly think this way too? It’s one reason I hear wives accusing their husbands of being perverts. Because some of the men in our lives were perverts, and it left an impression about the male race as a whole.

In an effort to protect ourselves, some women simply put up a wall against men, even their husbands. Your job, guys, is not to attack her for that belief but to help her pull down that wall by showing that you are not that guy, you can be trusted, and you will protect her.

Unexpected sexual touching can remind us of unwanted sexual touching. I know you guys like to hear things straight, so here it goes: If you think grabbing your wife’s breast out of nowhere is the way to get sex, you’re a fool. There are plenty of physiological and emotional reasons why this doesn’t get your wife’s sexual motor humming, but here’s another reason why she’s unlikely to enjoy that: It reminds her of sexual harassment she previously experienced. Even though she logically knows you’re not him, when you act like that jerk from high school who cornered her in the hallway and copped a feel … something clenches inside her. She may not consciously make the connection, but her body reacts negatively.

Distinguish yourself from that jerk in her past by demonstrating tenderness and respect. Be a secure place for her to express her sexuality without feeling viewed as an object or used for her body parts. Yes, I know it’s unfair that you’re having to deal with stuff some other guy did to her a long time ago, but we all come into marriage with baggage and we have opportunities to break down each other’s barriers and provide someone in this world our spouse can really trust. Don’t you want that to be you? She does — she wouldn’t have married you if she didn’t want the person she trusted most to be you.

Grabbing her without warning or invitation adds to feeling her body isn’t her own. When a woman has had her body touched without permission again and again, she feels a loss of control. She feels helpless to stop those actions that invade her most vulnerable and sensitive places.

When husbands grab their wives willy-nilly all the time, it can contribute to that woman feeling like her body isn’t her own — that it’s a plaything for someone else. Of course, our bodies belong to each other in marriage. 1 Corinthians 7:4 says, “The wife does not have authority over her own body but yields it to her husband. In the same way, the husband does not have authority over his own body but yields it to his wife.” But listen to that word choice: yield. The New Living Translation says it this way: “The wife gives authority over her body to her husband, and the husband gives authority over his body to his wife.” We give authority to the other — as a conscious, willful choice.

If you’ve read me for long, you’ll know that I encourage wives to constantly give the green light to their husbands for affection, foreplay, and sexual intimacy. In our marriages, we should feel comfortable touching one another romantically and sexually. But that doesn’t mean you get to Indy-500 your way to grabbing her privates with no warning. Your wife needs to feel like her body is worth something, and she gets to be involved in flipping that red light to green.

Now it’s awesome that God created us male and female. What a complementary design! But our gender difference can also make it difficult to understand how our spouse views the world. Today, I simply wanted you husbands to try to understand the sexual harassment most women have experienced in their lifetime. For some, it was one time; for others, it was an onslaught of unwanted contact. Regardless, it left an impression.

You can leave a different impression. You can become her standard for what it means to be a man. You, husbands, can beat back the view of men as sexual predators by treating women with respect.

You, husbands, can beat back the view of men as sexual predators by treating women w/respect. Click To Tweet

Start with your wife. She needs you to be her refuge and her ally.

“Husbands, in the same way be considerate as you live with your wives, and treat them with respect as the weaker partner and as heirs with you of the gracious gift of life, so that nothing will hinder your prayers.” 1 Peter 3:7

173 thoughts on “Your Wife Has Been Sexually Harassed”