I can’t stop reading and listening to all that’s happening with the #MeToo movement. This is a long overdue, watershed moment, and — as someone who is fiercely concerned about justice — I’m glad to see perpetual perpetrators of harassment and assault get a bit of comeuppance. More importantly, as someone deeply concerned about mercy, I’m glad that there is a shift to seriously investigating and believing credible stories from women and men who’ve been harassed and abused.

Yes, I know among the torrent of genuine allegations, there will be opportunists who make false accusations, those who wrongly equate an inappropriate comment with sexual assault, and those who choose sides based on who’s accused rather than the evidence at hand. And that can be discouraging.

While standing up for the oppressed should unite us, unfortunately it sometimes divides us. And makes us ask exactly how to handle these situations. That’s why I was happy to see an excellent question in my inbox related to what’s been going on. Here’s what the reader asks:

When someone works in an industry that is based on sex, sensuality, and beauty is the line more blurred as to what is appropriate? I really don’t want to discredit anyone or shame them as these stories come forward but they seem so detached from the realities that most of us, who do not use our sexuality to further our careers, live in. There are cases where the line seems hard and fast, like sex with minors, but others seems very blurred. I don’t want to say that women should “stay in their place” because that is not what I mean but it does seem that when you REALLY go as far out as some actresses and models do that you are opening yourself up to issues… I do tend toward thinking that its pretty silly to ask others to treat you with respect when your behavior reflects a lack of self-respect. BUT then I also think that the people who exploit these women are a perverts worth exposing…SO, I am sure you see that my thoughts are a bit tangled! 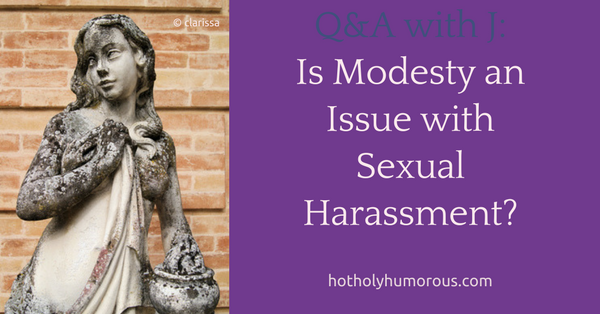 I titled this post “Is Modesty an Issue with Sexual Harassment?” but I want us to think beyond the typical how she’s dressed aspect of modesty. Modesty isn’t just what we wear, but rather “behavior, manner, or appearance intended to avoid impropriety or indecency” (Oxford Dictionaries).

Let me first be clear: Under zero circumstances does lack of modesty contribute to rape. It’s rape, people. I don’t care how much she was “asking for it” by how she was dressed or behaved. (Just writing “asking for it” nearly made me throw up — what an abhorrent concept.) I’ve heard many rape stories through the years, and in not one of them was it unclear that the victim did not want to have sex. If I’ve said it once, I’ll say it a gazillion times: Force is never okay with sex. Never. God’s Word plainly presents sexual intimacy as He designed as to be had within marriage and to be mutual. If someone rapes another person? That‘s all on them.

But these #MeToo stories exist on a continuum, and while rape is the far end, the continuum also includes unwanted touches, aggressive advances, and inappropriate comments. When we’re talking about harassment more than assault, is there something we women can do to discourage that behavior?

As unpopular as this might be, I believe the answer is yes. And that it’s a biblical answer.

Consider Proverbs 7, in which the father warns his son about the “adulterous woman.” When he describes that woman, she’s not behaving modestly:

In the end, “with persuasive words she led him astray; she seduced him with her smooth talk” (verse 21). Of course, that’s an egregious example (like I said, she thrust herself on him), but it didn’t start with her slamming her lips onto his. It began with her dress, her manner, her seduction. She was conveying a message, and the man in this example received it loud and clear.

Unfortunately, sometimes we women don’t think through or perhaps appreciate what messages we’re sending. And in some circles, “embracing my sexuality” has come to mean displaying your body in public in sexualized ways.

So I understand the confusion of today’s questioner when women are launching complaints against men for treating them like sex objects, but then you go look at what some of these women wore to, say, awards ceremonies and wonder what messages they thought they were sending. (By the way, these aren’t wardrobe choices dictated by a costume designer or movie director; I’m talking about what actresses themselves choose to wear to a work-related event.) Some women also behave provocatively, talk about their sexual desires publicly, and use their sexuality to gain advantages in the workplace.

Is it fair to blatantly use your sexuality for your own gains, but be angry when others view it as a thing to be used as well? Look, it’s not that person’s fault if a harasser doesn’t control their own thoughts or behavior, but at the same time maybe it’s not so surprising that some will abuse that situation.

Let me share a personal story. When I was in my late teens, I went dancing. At the club was a lovely young lady dancing provocatively and wearing a tight, white dress with holes up the sides that exposed her bare skin. Later while I was in the restroom, she was there telling a friend about a stranger moving his hands to her butt while they danced. She exclaimed, “What kind of girl does he think I am?” I recall thinking: You pretty much advertised the kind of girl he thinks you are.

Did her dress and movements give him a right to grope? Of course not! But two truths can exist at once:

Now some men would grope a woman wearing a turtle-neck potato sack. However, some do respond to cues in their environment, becoming more assertive when they believe, rightly or wrongly, that the other person is sending a welcoming message.

And through our modesty or lack thereof, we women contribute to the culture around us. And if we’re conveying that we want to be seen not merely as attractive, feminine beings, but truly as sex objects, then we’ve played some part in being treated that way.

Now this is such a fine line to walk. Even as I write this, I know I’m angering someone out there. I myself could argue with points I’ve made taken out of context. But, looking at this in a big-picture and biblical way, it comes down to this: We are each responsible for ourselves.

I can't make someone else respect me, but I can treat myself with respect. Click To Tweet

I’m not blaming any victims in the #MeToo movement. Far from it! What I do want, however, is for us to take an honest look at our culture and ask ourselves if there’s anything at all we can do to encourage less harassment and more respect.

Hey, following God’s design for sexuality, keeping the most sensual parts of ourselves inside our marriages, is a good idea anyway. And it might help.

For those who have been victims (that’s pretty much all women), you should request and expect respect. Even if you wish you’d dressed or behaved differently, it still wasn’t okay what the harasser or assaulter did. You have a right to complain and try to change the culture.

At the same time, going forward we can be fully feminine in our dress and behavior while still behaving with modesty. We should do it not merely to stop someone from thinking the wrong thing (which they might do anyway), but because it demonstrates our own self-respect.

And for those of us out here hearing and watching these stories unfold, let’s support victims. As the questioner said, it can feel tangled when you have a scantily clad actress complaining about some powerful guy coming on to her, but the first doesn’t warrant the latter. We can make a case for the benefits of modesty at the same time that we hold harassers and abusers to account for their unscrupulous and predatory behavior.

For more on the #MeToo movement, be sure to listen to our Sex Chat for Christian Wives podcast episode titled “Sexual Harassment #UsToo.”

118 thoughts on “Q&A with J: Is Modesty an Issue with Sexual Harassment?”