Why? Because they want sex, even swear they need sex, but their wives aren’t engaged. What circumstances cause these guilt feelings? Here are a few.

She thinks it’s dirty. This wife was taught that sex was something bad girls do, a mere act of the flesh that godly women don’t desire or enjoy. Or maybe she experienced sex misused in her past and it’s left a bitter taste in her life; she can’t imagine sex being a truly good thing.

So when her husband craves her body and the ecstasy of lovemaking, he feels bad. He knows she doesn’t want it, doesn’t enjoy it, thinks he’s a lesser creature for even wanting such a sordid act so often. But he can’t get rid of his sex drive. He wants his beloved woman, deeply, desperately. So what can he do? How can he get past the guilt of constantly wanting to be one flesh with his wife?

She doesn’t have time for it. This wife is so busy with the demands of being a wife, household manager, mother, worker, and whatever other roles she’s balancing. Yes, she understands that sex is important, but can’t her husband see that it’s secondary to the higher purposes of her life? Perhaps she’s running a ministry, something that makes a genuine difference in others’ lives, and her husband feels guilty for taking her away from her calling.

She rejects his advances. Most times he asks, this wife turns him down. He knows that she doesn’t want sex, not anywhere near like he does, and he can’t even fully understand that. Doesn’t she love him? Maybe the problem is with him, that he wants it too much.

Should he simply pray for God to douse his desire, leave him content with those few times she is willing? He hates to ask again, but it’s been so long and he wants to have sex — sex with her. How can he move beyond the rejection?

She doesn’t enjoy it. This wife will oblige her husband’s advances, but she doesn’t like it. Her attitude screams, This is for you only! Maybe she believes she’s being truly loving, offering her body to him for his satisfaction. And because he wants sex so very much, he partakes.

He knows he’s the only one getting satisfaction, but even that satisfaction is bittersweet. And he feels guilty that he’s using her for his own gratification, when he really desires for her to enjoy the experience like he does. He feels trapped — his only choices being to refuse the sex he wants so very much or continue to feel like a clod for having his way with her.

She downplays her enjoyment. This wife willingly engages, but she discounts her own sexual needs and desires. She doesn’t take the extra effort to figure out her body and what feels good. She won’t communicate what she likes, maybe even when asked. She skips the orgasm more often than not, perhaps proclaiming it’s not worth it. Her downplaying of enjoyment conveys that she doesn’t feel like she’s worth it.

Yet her husband yearns to bring her pleasure. He revels in those few times she goes over the top, to the peak of sexual arousal. He feels guilty when he can’t bring her there, when she doesn’t let him focus on her, when the balance of sex is mostly for him. If only he could help her understand how turned on it makes him, to turn her on. 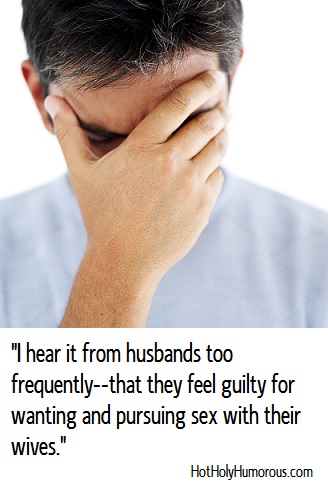 I hear it from husbands too frequently — that they feel guilty for wanting and pursuing sex with their wives. It’s easy to misconstrue your man’s eager advances as a merely physical desire to “get his jollies.” There are plenty in the male species who approach sex just like that, especially in single life and secular culture.

But what I also hear from husbands is how much sex means to him. How it’s not just about the physical release. Of course, it is about the physical release somewhat; that body craving to be intimate with the person you love is a God-given biological desire. But sex means more than that. It’s an expression of deep love and connection. Husbands feel loved and confident and whole when they experience regular, mutual sexual satisfaction with their wives.

Sex was God’s idea. It is to be enjoyed in the confines of a covenant marriage. It should be mutually sought and satisfying. It is a good thing.

Do you make your husband feel guilty for wanting that?

Think about what messages you intentionally or unintentionally send about the meaning of sex in your relationship. Whatever obstacle prevents you from fully engaging in God’s gift of sexual intimacy, address it today. Help your husband receive what God intended him to have — the intimacy he can only receive from you, his chosen beloved.