Today’s question comes from two different readers who contacted me with similar situations. Both are newlywed wives who haven’t had the sexual intimacy they expected to have after they tied the knot. Here’s the first one:

It has been one month since we got married and we still haven’t had sex. He told me last night that he was nervous almost to the point of tears because we have always been taught not to have sex before marriage, and now it’s all of a sudden okay. He said it’s like a Wall is there that he can’t get through. What should we do? How do i help him? He feels bad because i want to and he can’t, and i feel bad because i don’t want him to feel pressured. I just don’t know what to do.

I recently got married and waited until marriage. My now husband wasn’t a virgin before but waited with me. The sex has been less frequent and passionate than I had expected and last night he revealed to me that because he had to ”turn it off” for the last 2 years to stay strong for me that he has a hard time turning it back on. I feel really sad about it and kind of mad too. I’m trying to not take it personally but I never thought I’d have to ask for sex or even be turned down in the first month of marriage. I’m trying to be patient and pray about it. Any suggestions on what to do? 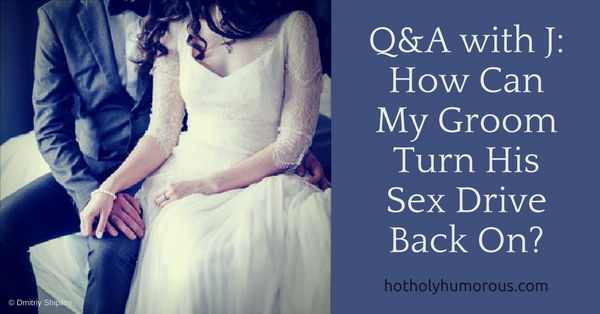 There are differences, in that one groom has never had sex, while the other had it previously but waited with his bride until they got married. But both gentlemen are having a terrible time awakening their libido after keeping their sexual feelings in check for so long.

It’s admirable that they waited, just as we are commanded to do, but sometimes our message about premarital purity encourages people to simply repress their sexual feelings. Repression here is “a process by which unacceptable desires or impulses are excluded from consciousness and left to operate in the unconscious” (Merriam-Webster). Our libidos aren’t really gone, but we stamp them down so hard, it’s difficult for them to get back up when the right time arrives. (See also When Your Groom Is Anxious about Sex).

But I don’t see where the Bible teaches repression of our sexuality. Rather, we can acknowledge our sexuality and exert self-control: “Similarly, encourage the young men to be self-controlled” (Titus 2:6). Look at Jacob, who worked for seven years to marry Rachel. He kept his behavior in check, but he didn’t deny what he eventually desired, even saying to his father-in-law at the end of those long years: “Give me my wife. My time is completed, and I want to make love to her” (Genesis 29:21). Can’t get much clearer than that.

Even 1 Corinthians 7:9 says to singles: “But if they cannot exercise self-control, they should marry. For it is better to marry than to burn with passion.” In other words, control your sexual desires outside of marriage, and if you can’t do that, get hitched. It’s a nod that God made us as sexual beings, a fact we cannot and should not ignore.

God made us as sexual beings, a fact we cannot and should not ignore. Click To Tweet

Teaching repression of our sexuality can result in situations like these where it’s hard to turn your libido back on, even when you’re in the right framework for sexual intimacy (marriage).

But to the question: How can you awaken his libido after it’s lain dormant for a while? How can he get past that hump of repressing his sexuality?

It stinks not to get to make love on your wedding night. Many couples look forward to that experience. But plenty of couples actually don’t have sex right away, due to physical issues, time constraints, or even Aunt Flo visiting at the most inopportune time. But one of the perks of sex in marriage is you have a lifetime to get to know one another physically and experience all kinds of sexual pleasure and intimacy.

Let’s imagine that you make love once a week (it should be more, but go with me here), and you’re married for forty years (more than reasonable, given the average age of marriage and life span in the U.S.). At that rate, you’ll have sex 2,080 times. Two thousand eighty times. So even if you miss out some at the beginning, you’ve got plenty of time to figure this out and still have lots and lots of sex. Point being: Relax. Give yourselves some grace and time to work things out.

Talk about the baggage.

We all bring baggage into our marriages—some toting in a toiletries bag of issues and others dragging a massive trunk behind them. But make no mistake: We’ve all absorbed bad ideas about sexual intimacy. Erroneous messages surround us, both in the secular world and, sadly, the Church. All kinds of messages soak in, and we can find them hard to shake once married.

So talk about it with each other. Be honest about your expectations and concerns, and then listen to his. Let him know that whatever he says, you won’t judge it harshly. Once you’ve admitted what’s going on, challenge each of your internal beliefs and see which ones hold up to God’s Word. For example:

Bringing your anxiety from the subconscious to the conscious level and then challenging those beliefs can help you work through the barriers preventing you from experiencing sexual intimacy.

Focus on romance and foreplay.

Focus on that word arouse, and make that your goal for now. Not orgasm, not penetration, not even erection necessarily, but arousing the sensations that eventually lead to all of those things. I firmly believe that couples don’t spend enough time exploring one another’s bodies and discovering what arouses them. But the knowledge you gain through this process will be beneficial throughout your marriage.

Get a great book with ideas on what to do, so you can try out different activities. You know, like this one, which I highly recommend: 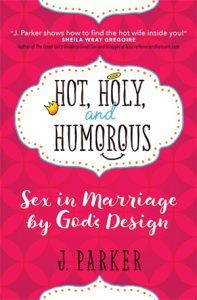 Take the pressure off, and give yourselves, and especially him, permission to enjoy touch, exploration, and romance. Let your husband know that he doesn’t have to “perform”—that this can be an opportunity to get to know one another and experience pleasurable feelings.

Use self-talk and encouragement.

When dealing with high anxiety or fear, psychologists often prescribe systematic desensitization. You can find many resources on how to apply this procedure, but it’s gradually exposing yourself to the anxiety-inducing stimuli and introducing a relaxation response at each stage. This principle works with sexual anxiety as well.

Let’s say you’re going through the foreplay mentioned above, and your husband becomes tense. You two can pause, and he can remind himself that sex is a gift from God, meant to provide intimacy in his marriage. You can encourage him as well, helping him relax. You two could even stop to pray for God’s comfort and courage to continue. When the tension has released enough—it may not release completely—you can get back into your groove.

Using desensitization techniques, he can likely progress a little farther each time, until intercourse is possible…and enjoyable. Another way to think of this is baby steps. Nothing says you must leap into intercourse on your wedding night, but marriage is the time when you get to build all kind of intimacy, including physical intimacy. Be willing to build slow, feeling good about each stage of progress.

If problems persist, see a doctor and/or a counselor. There’s nothing wrong with this taking some time, but you do want to be moving in the right direction—toward God-honoring, mutually satisfying sexual intimacy in your marriage.