Orgasm seems to be a rather straightforward experience. Scientifically speaking, a woman has had an orgasm when she releases sexual tension through rhythmic muscular contractions in her pelvic area. These spasms are accompanied by heightened sexual pleasure — of the my-world-just-kaboomed-and-I-liked-it sort.

But not all orgasms are the same. While there’s long been a debate about whether there are two kinds of orgasm — clitoral and vaginal — or just one, in terms of experience, there are really many kinds. 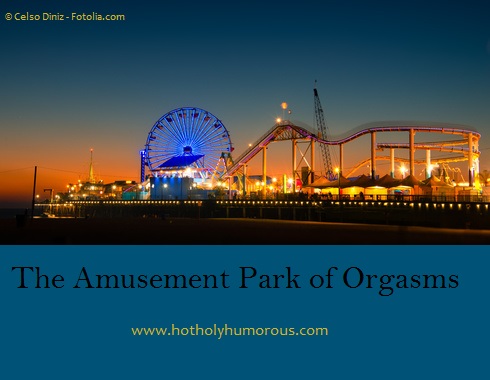 Here are some of the options of what you may have felt or might feel in the future (if you haven’t had an orgasm yet). I hope you enjoy my made-up terms for them. 😉 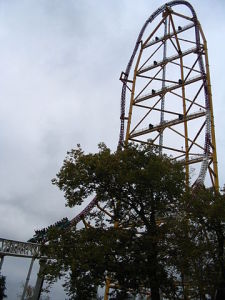 by Matt314, via Wikimedia Commons

Tilt-a-Whirl Orgasm. Don’t remember the tilt-a-whirl? Think teacup ride at Disney World. You’re in a small enclosure going around a big circular platform (think of that as your overall sexual arousal) and now and again centrifugal force swirls you around in a stomach-plunging wave of excitement (orgasm).

By Calle Eklund/V-wolf via Wikimedia Commons

So the Tilt-a-Whirl Orgasm is a series of waves of pleasure, with a small dip in between but rising again to a crest of excitement. These waves can be within seconds of each other, and you might have two or three or more in a row.

Vaginal orgasm may conform to this experience, as the intercourse experience can make your pleasure feel deeper and more intense, resulting in waves rather than a single peak. But you can also have this type of orgasm with foreplay.

Spin Me Crazy Orgasm. When we visited the amusement park, my kids always wanted to go on this one ride that freaked out the mother in me. People were secured into seats at the ends of these long arms, and then the whole thing rose into the air. The arms twisted around, and each car revolved over and over and over. There was no literally no downtime between thrills and screams, just an ongoing assault of frenzy and excitement. Sometimes an orgasm feels like that. As if you have no downtime whatsoever between the repeated sensations of pleasure overcoming your body. It’s like you peak-peak-peak over and over. How long can you keep that up? Well, like any ride, eventually a girl gets dizzy, you know? But more likely, the tension releases, the sensations stop having that effect, you just feel like it’s enough, or something…and the spinning stops.

And yes, leaving you an exhausted heap of what-just-happened?

Swing Out Orgasm. Sometimes, however, an orgasm just feels like a free-and-easy swirl through the air. Like that ride where you sit in a chair suspended by cables and fly out over the ground. It’s not as thrill-inducing, but it’s a moment of surrender and excitement. 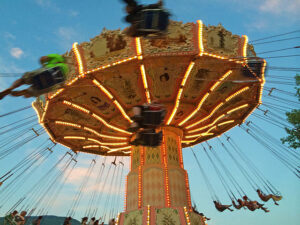 By Ricardo630, via Wikimedia Commons

That orgasm can feel like a pleasant wave riding over your body. The spasms may be less intense and further apart, but the climax still releases tension and brings a wash of calm and happiness. A not-as-strong orgasm may be just the thing you need to let go and bask in that beautiful moment of intimacy with your husband.

This is by no means an exhaustive list of all the orgasms possible. I simply want to draw attention to the fact that orgasms are not a one-size-fits-all. If you experience heightened pleasure and spasms in your pelvis, you’ve had an orgasm. And let’s hope you reveled in it.

Not to mention the grin and swagger your husband gave afterward.

And if you haven’t had an orgasm yet, here’s some advice on getting there. Don’t sweat or worry that you haven’t reached this particular climax; rather, keep pleasuring each other in your marriage bed and finding ways to enjoy your intimacy as much as possible…and you’ll likely get there. As you can see, it’s quite a ride!

How would you describe the orgasms you’ve experienced? What advice might you have for other Christian wives on this wild ride?

18 thoughts on “The Amusement Park of Orgasms”