Today’s reader question may be our shortest one yet. Here it is from our most popular commenter, that ever-present Anonymous.

I don’t know exactly what the reader expected me to say on the subject. However, a common question is whether penis size matters and, if so, how.

Let’s start out with a little anatomy. The average length of a penis has recently been reported at 5.88 inches. That’s slightly smaller than a U.S. dollar bill. Previous estimates of 6.5 inches were skewed by discrepancies in self-measurement and liars who claimed to be up to 10+ inches. That 5.88 inches is an erect penis, by the way.

Interestingly enough, there are also variations in how much a penis “grows” when aroused. It isn’t a fixed amount, like double. A smaller flaccid penis could become larger when erect than a larger flaccid penis.

Which matters? From what I can tell, that flaccid penis only matters in the junior high locker room when you’re first aware of others. In adulthood, men care about their erect penis size because that contributes to greater confidence about their body and their ability to satisfy their mate. (Correct me if I’m wrong, guys.)

So does a husband’s penis size affect the pleasure his wife receives in intercourse?

Almost every penis is big enough. The female vagina also expands when sexually aroused. The most commonly used measurements come from research done in the 1960s (by Masters & Johnson), indicating that vaginal length when sexually stimulated ranges from 4.25 to 4.75 inches. Obviously, the average 5.88-inch penis is more than able to create contact and friction throughout the whole vagina.

But these are averages, right? So what about the shorter penis and the longer vagina? Does size matter then?

Here’s how the averages stack up for penis size. 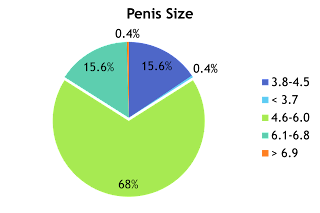 But even if he doesn’t, the most sensitive area of the vagina is that closest to the opening. That’s where the real action is. Paul Byerly of The Marriage Bed explained this well: “Some men worry about the size of their penis. Since only the first 2 to 3 inches of the vagina has nerve endings, length has little to do with pleasing a wife during intercourse.” So husbands can relax knowing that they are quite able to sexually stimulate their wives regardless of penis size.

But are bigger penises better? Sometimes yes, sometimes no. In a recent study in The Journal of Sexual Medicine, researchers reported that when it came to achieving vaginal orgasm, “33.8 percent preferred longer-than-average penises, 60 percent said size made no difference and 6.3 percent said longer was less pleasurable than shorter.” Recognize that the study was self-reporting from 160 university students (not a representative sample of wives). Still, note that 2/3 didn’t think bigger was better. The issue for the women I’ve talked to is simply “big enough,” and almost every guy is.

The one possible advantage of a longer penis may be having contact with that “G-spot,” an area on the anterior wall of the vagina which some claim to be especially erogenous. If you’ve identified your G-spot, and your husband’s penis is able to reach and thrust against it, that may feel extra nice. But some women report that kind of intensity is too much. Honestly, though, even those who have located the spot, can achieve penile contact with it, and enjoy that sensation, are not not likely to make that happen every time they have sex. Perhaps it’s a perk, but there are numerous ways to achieve orgasm.

One issue with a bigger penis that isn’t talked about as much is that sometimes a huge penis hurts. A friend once told me that sex hurt because her husband was “hung like a horse.” (Yes, it took a little while before I could make eye contact with her husband because the stupid word “horse” kept galloping through my head.) But I understood her point. Julie Sibert of Intimacy in Marriage addressed this subject well in Penis Size and Painful Sex: What’s a Wife to Do? Husbands with XL penises may need to be more careful with their wives, taking into account how able she is to take in his full amount.

What about thickness? Usually, when penis size is discussed, people are talking about length. However, I’ve found more women concerned about the thickness of a penis. Specifically, when a penis is much thicker than usual, the wife may need greater lubrication and gentleness of entry so that her vagina can flex enough to take him in. I’m not sitting around having penis conversations all the time, but I have yet to find a woman who complained about a too-narrow penis. Given the size of the vaginal opening and elasticity, a woman can feel and be stimulated by a penis of just about any thickness. We adapt to the size of our husband’s organ.

What’s the “right-sized” penis? My answer: The size your husband is. If he’s the right guy for you, his penis is the right one for you too. You may need to figure out how to make it all work, though. If he is particularly big, you may need additional lubrication and for him to go slow and easy while you stretch to receive him. Over time, a wife’s body will likely adjust to that size. If hubby’s small and you can’t feel it quite as much, perhaps a different sexual position could help provide greater sensation, or more stimulation can be applied with his fingers on the clitoris as well to get the wife to orgasm.

If you want your vagina and hubby’s penis to come together in perfect harmony, practice. Try different things and see what feels good.

What should you say about your husband’s penis size? OMG. No, seriously, I found out a few months ago that there is a condition called Oversized Male Genitalia. Its acronym is OMG — just what you might say if you saw one. (If you’re not rolling on the floor laughing by now, you aren’t reacting like I did when I read about this oddly-named condition.)

Your husband probably doesn’t actually have OMG (unless he’s 8 inches or more flaccid). But you do want to make him feel confident about his body and his ability to satisfy you. A little “wow” now and then when he pulls it out isn’t too much to ask, is it? Don’t lie, but do let your husband know that he is big enough. If you can’t feel it enough, don’t insult his penis; it’s doing the best it can. Ask him to try something different so you can feel even more of him.

However, I have personally never known a woman who said her guy was too small for her to feel sufficient pleasure.

Does penis size matter? Yes, a little. But I’m a firm believer that it’s how he uses that penis that matters a whole lot more. It doesn’t matter if my husband is a Tall, Grande, or Venti, as long as he’s my favorite flavor.

“My beloved is radiant and ruddy,

24 thoughts on “Penis Size: From the Wife’s Point of View”