Sometimes my aha moments come when I’m in conversation with someone about godly sexuality. Recently, I was discussing with a friend men’s struggle against visual temptation, easily found these days in rampant pornography that you must intentionally avoid, and I said something like this: 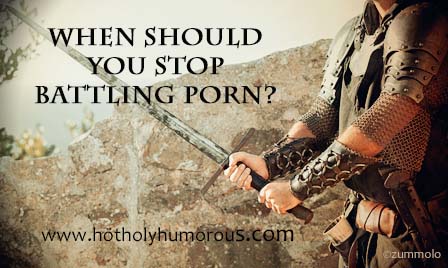 As a writer, I’m well aware of the power of words. While I don’t like honing in on one particular word rather than taking a person’s message as a whole, sometimes our word choice can convey an erroneous message. Or rather it’s truth, but not the whole truth.

But the subtitle of Stephen Arterburn and Fred Stoeker’s popular Every Man book is “Every Man’s Guide to Winning the War on Sexual Temptation One Victory at a Time.” Did you see that? Winning the War!

And I’m fully convinced that, in Christ, we can have victory.

“But thanks be to God! He gives us the victory through our Lord Jesus Christ” (1 Corinthians 15:57).

“For the Lord your God is the one who goes with you to fight for you against your enemies to give you victory” (Deuteronomy 20:4).

“For though we live in the world, we do not wage war as the world does. The weapons we fight with are not the weapons of the world. On the contrary, they have divine power to demolish strongholds” (2 Corinthians 10:3-4).

“With God we will gain the victory, and he will trample down our enemies” (Psalm 60:2).

Of course, fighting against intense temptation is a hard road. It is a battle, but it’s a battle that can lead to true victory.

“In this world you will have trouble. But take heart! I have overcome the world” (John 16:33).

“They have greatly oppressed me from my youth, but they have not gained the victory over me” (Psalm 129:2).

Here’s the reality: I struggled in my promiscuous past and took on plenty of sexual baggage. I was an easy target for Satan and didn’t anticipate that I could ever be good enough to satisfy God. I battled, but deep down in my heart, I didn’t expect victory.

When I finally fell in humility before God and begged for His victorious hand to lift me up, that’s when the real battle began. That’s when I was no longer fighting with an ice pick but a sword. Did Satan get in some jabs? Oh yeah, he did. I still struggled, but I could see progress.

I was no longer having some wins and some losses, but more wins and fewer losses. And my wins became more frequent and my losses less frequent, until one day I realized that the things that used to be a temptation . . . simply weren’t anymore. That old life held no appeal for me.

I’m not discounting the belief that an addict is always in recovery. I get that. You have to remember your history, as Paul often did, and make conscious decisions to guard against that temptation rising against you again. But I also believe this verse:

“He who began a good work in you will carry it on to completion until the day of Christ Jesus” (Philippians 1:6).

Don’t wallow in the belief that this is something that will always be a struggle, even giving yourself an “out” for bad behavior. Expect more of yourself and of God! Strap on your armor and get to fighting. Fight harder and smarter.

You don’t need to struggle alone. Invite God into your battle. Be honest with your spouse. Find mentors, counselors, confidants, and friends who will fight with you. Seek resources that will keep you on the right path and help you get back on the path if you stray. Believe in the possibility of victory.

“Blessed is the one who perseveres under trial because, having stood the test, that person will receive the crown of life that the Lord has promised to those who love him” (James 1:12).